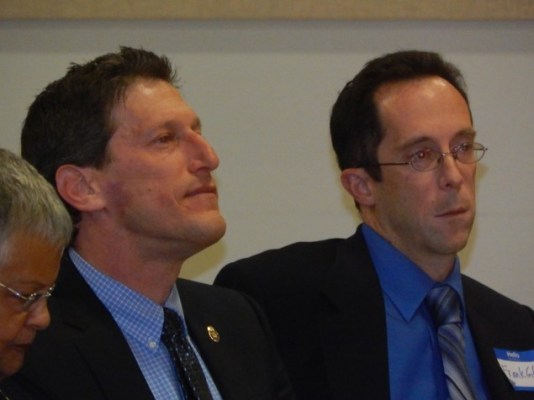 Zwicker, left, sponsor of a bill to allow 17 year-olds to vote in primary elections.

Two bills to drive voter turnout head to a Senate committee hearing after passing the state Assembly earlier this month. The bills, sponsored by Assemblymen Andrew Zwicker (D-16) and Craig Coughlin (D-19) repectively, would allow 17 year-olds to vote during primary season when they will reach the age of majority before the general election and allow voters to become automatically registered to vote when receiving a new driver’s license.

The committee meets tomorrow, Thursday June 9, at 1PM in Committee Room 7 of the State House.

Zwicker’s bill passed in the Assembly in a 57 to 17 vote, with little Republican support. 22 states already allow 17 year-olds to vote in primaries, and Zwicker predicts that the bill would allow 23,000 more young voters to participate in deciding their party’s nominee. Coughlin’s passed 52-21.

“Young people in New Jersey are eager to raise their voices and make a difference,” Zwicker said. “Barring voters who will be able to participate in a general election from taking part in the primary beforehand unjustifiably dampers that enthusiasm.”

Assemblyman John McKeon (D-27), chairman of the committee that advanced the Zwicker days before it went to the Assembly floor, said that he would be willing to support an override vote in the lower house if the measures pass the Senate only to be vetoed by Governor Chris Christie.

“I think they’ll certainly have a majority in the legislature but what the governor will do with them, god knows,” McKeon said. “In an override, maybe some more enlightened of the Republican caucus will start to vote again in the way that they want to as opposed to how they’re told to.”

McKeon was the sponsor of an unsuccessful measure that would have changed state redistricting standards, mandating that ten of the state’s 40 districts be competitive. That proposal, critics said, would have heavily favored Democrats.

Assemblyman Eric Peterson (R-23) was one of the Republican lawmakers to oppose both proposals, saying that he doesn’t expect them to improve New Jersey’s paltry participation rates (just 67 percent of eligible voters turned out in the 2012 presidential elections).

“I don’t think this really changes anything, and I don’t think it’s going to increase any voter participation,” Peterson said. “There’s a set system in place. It’s worked. And I’m not really sure what the problem was with the current system that it needed to be changed.”