Like their pummeling space-prog, Vancouver’s Black Mountain is hard to pin down, and their heads are hard to locate.

Three albums later, that disdain for modern music has played out in glorious widescreen.

Despite its title, 2008’s In The Future stepped further into vintage prog with keyboardist Jeremy Schmidt’s heady, ’70s sounds and arrangements. 2010’s Wilderness Heart recaptured some of the Zeppelin-esque riffage and acoustic blues vibe they touched on during the first album, but it wouldn’t be another six years until they gifted us with IV.

Gloriously merging the strongest sonic hallmarks of their prior records, Black Mountain have gone full Hawkwind at last—Schmidt’s keyboards are high in the mix again, matching the analog crunch of McBean’s Gibson with a sonic heft powerful enough to signal extraterrestrials. It doesn’t matter if we know where Black Mountain are, really. They don’t either, and that’s O.K.

Details of the band’s rationale behind making music are tough to parse.

I was supposed to talk to both Webber and McBean; only Webber came to the phone. McBean appears equally reticent to speak for the project during a recent KEXP studio session, defecting to Webber whenever host Cheryl Waters asks a question. This is the clearest reminder that Black Mountain is a five-person band where everyone collaborates with writing, the flagship project of their art collective, Black Mountain Army.

IV’s lyrics evoke ambiguous images of circumcision, suicide and crucifixion, but in the context of its song cycle a narrative emerges.

“Mothers of the Sun” opens the album with a lengthy prog screed, a direct defiance of some extraterrestrial overlords who have sought to oppress Black Mountain. “Let’s come together upon heaven’s ground,” sings McBean, “what you’ve been schoolin’ has messed us around.” Maybe this leads to the battle described in next tune, “Florian Saucer Attack”.

“Its funny how themes come up without us knowing,” says Webber. “When you listen back you’re like, ‘oh shit—’ you realize there were all things in it that become apparent to what you were thinking about at the time. It tells somewhat of a story.”

She’s suggesting that IV‘s story is ultimately up to you to unpack, and that’s fine, but I have my own narrative. By the time we get to Webber’s stunning orchestral ballad and lone solo composition on the album, “Line them All Up,” our heroes are pleading for a resistance to the aliens, looking up at the sun, and insisting, “God’s gone missing into flames.”

McBean’s next tune, a gothic synth-dance in the graveyard with Robert Smith called “Cemetery Breeding” no longer has the singer proclaiming, “I don’t believe in suicide,” like he did in the earlier tune “Defector.”

“Ooh, when you looked in my eyes, I was dreaming of suicide,” he confides to his lover over the presumed threat of panspermia on “Cemetery.. “Ooh, when your lips fell on mine, I was counting all our friends who’ve died…now tell me you’re mine.” This scene of devotion being born from extreme duress may be rooted in fantasy and science-fiction, but its emotional heft still speaks to how emotional expectations can put a lot of pressure on a relationship—impending insemination of mankind or no.

Whether our heroes triumph over alien forces or not by the end of IV, the epic Funkadelic-channeling choral outro of “Space to Bakersfield” asks them if they’re listening.

Whether or not you particularly enjoy such nerdier, denser music, IV rewards anyone willing to invest in the album as a singular experience. These are the sounds of a band rediscovering what playing to each other’s strengths feels like—reckoning with their human qualities, ambling suites of live keyboard, thick walls of distorted guitar crunch, bared gender dynamics and all.

In their best work there’s always been a strong collective intuition Black Mountain have with each other, as players and storytellers. IV is the culmination of that intuition thus far, and holds up as a captivating listen because of it.

Schmidt has designed the cover art for each Black Mountain album, and IV’s cover is no different. A vintage-suited spaceman stands in a giant, grassy esplanade while a fire burns beside him and a Concorde jet hovers above, and that’s all we know for sure.

Though no one in Black Mountain feels any urge to decode or explain exactly what’s going on during IV, Schmidt’s artwork suggests a communal recognition of the records central themes and central conflicts. “His mind works in weird ways,” Webber admits. “So I’m not always sure what he’s thinking when he does something like that, but it always shows what’s going on.” 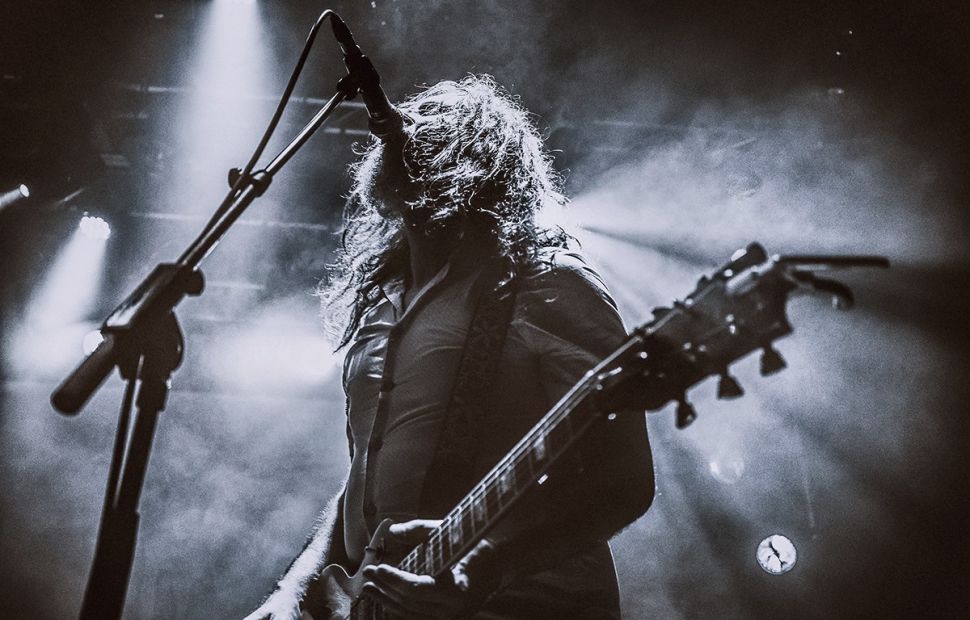