Nearly ten years ago, Bo Burnham posted his first video on the Internet, singing in a tee-shirt at a keyboard in his bedroom. His humor songs–undeniably catchy, usually taboo–paired with a pre-pubescent baby face led to hundreds of millions of video views,  a fan base that could effortlessly sing along to raps on his tours, and an established place among a burgeoning new class of performer: YouTube celebrity.

Now 25-years-old, Burnham parlayed his internet audience into a more traditional comedy career: touring as a standup, writing a book of poetry, making viral Vine videos, and creating and starring in the under-watched and under-appreciated MTV television series Zach Stone is Gonna Be Famous. His work was a tacit middle finger to anyone who might dismiss YouTube fame as the playground for narcissists or opportunists. Opportunistic as he might be, it has become impossible to see Burnham as anything other than a prodigiously gifted comedian and musician, and one who happened to be infuriatingly young.

On June 3, Burnham released his third comedy special, Make Happy on Netflix, in which he uses lights and sound to create a show that’s less of a stand-up routine and more of a one-man show. He leaps around the show, making fun of the music industry and performers as he puts on a dazzling performance himself.

At the end of the special, he asks, “Are you happy?” to the audience. I wanted to turn the question back on him. In certain lights, this lanky, experienced, brilliantly successful comedian still sometimes looks like a fifteen-year-old in his bedroom, saying uncomfortable things and reveling in the attention. But only in certain lights. The rest of the time we get comedy’s Byronic hero with an internal engine that propels him to create so prolifically that one imagines it could solve the energy crisis.

His comedic tone verges towards “College Freshman Who’s Too Smart For His Own Good,” but unlike the kid in your Philosophy 101 class (or, cough, that guy in your MFA), Burnham actually might be the smartest person in the room.

“I think the last special, which was called what. was sort of like burrowing into my own head. It was all very introspective and closed off, and this one is meant to be like that one but inside out: Now it’s pointed out towards the audience. It’s outrospective. The last one started with a big voiceover talking about me: ‘This is Bo, and he’s this many years old, and he’s this way,’ and this one starts with ‘Hello audience,’ and I come out and it’s all call and response with the audience. It’s weirdly like a relationship piece, but about the very strange relationship between a performer and an audience, which I just think nowadays is a very vague and wide-reaching sort of relationship.

On being called a hypocrite:

“I think I wear my hypocrisy on my sleeve. I would never say I’m not a complete hypocrite. The show is meant to be manic and strange, and its doubling back on itself because it is so hypocritical. I think the problem is that oftentimes, the only people that are qualified to talk about something are people that, were they to talk about it, they’d be hypocrites. I don’t think I would know certain things if I hadn’t benefited from it. So I feel like it’s sort of my job to just pull the rug out from under something. I just wanted to do a show with bells and whistles about bells and whistles, to make a spectacle about what a spectacle is.

“I think a lot of people have a feeling that they’re being watched and they need to perform their lives for people and I think it’s just sort of gross and sort of the death of everything.”

“I’ve always just been very confused about how comedy is supposed to be about honesty, how everyone would always say to me, “You got to be more honest up there,” but honestly what I’m feeling is: this is strange. That’s the first thing I’m thinking. That me standing up here is super weird. This is all very weird and us pretending this isn’t weird, pretending like I’m your best friend, just a cool guy at a party getting up making jokes, is really strange.

“With this hour I feel like I finally found the connective tissue I was looking for. My hope is that it’s not just total inside baseball, just in-jokes about the industry by someone in the industry, but that it’s really just talking about the way we all relate to each other, as performers and audience members in a weird tangled way. And I learned that, just from doing that and seeing how people responded to it, people relating to things where I’m like, ‘Why are you relating to this?’ I made this thinking, is this only going to be relatable to someone who’s a male comedian in his early twenties?’ I think a lot of people have a feeling that they’re being watched and they need to perform their lives for people and I think it’s just sort of gross and sort of the death of everything.”

“It is really strange. I feel lucky where I’m not famous famous. I’m not someone that everyone kind of knows for no reason. If people know who I am, they like me because if they didn’t like me, they forgot about me.

“It’s strange to do a show that’s all about undercutting celebrity worshipping and performing and then leaving the venue and [fans are like] ‘Whoooooooo!!!’ There’s nothing about being recognizable that I think isn’t weird and strange, and it’s certainly strange to be recognizable as this person, on stage, that is called YOU, that is really funny for like an hour but you know, I worked two years to be that funny for an hour. That’s not who I am AT ALL. I’m so not that person. That is a weird performed version of myself.”

On the musical movie he was writing with Judd Apatow:

“That was something I signed up for when I was like 18 and I though I could write a musical, and I very quickly realized I am no where near talented enough to write a musical. Now I feel like I could maybe do it, with a musical collaborator, a composer or orchestrator or something. It was a really great experience, I got to learn how to write a movie from Judd, which was a huge privilege, but I’m glad that didn’t see the light of day. It’s the first thing I wrote when I was 18: A giant movie. I’m glad that wasn’t my first gigantic statement into the world.”

On what’s coming next:

“There’s no performing coming up, I’m just going to take a break from it for a little while. It’s coming up on 10 years since I started, and I feel like I need to take a breath and maybe re-choose my life, and this [special] really did feel like the end of something. I’m not saying the ending of performing, but it did feel like I finally said the things I’ve been circling around for a while and trying to figure out.

“I’d love to do something that doesn’t have my stupid face in front of it. I feel like I’ve exhausted what I can do with my own face. I’d love to write a song that someone else sings that can actually sing really well. Like, my writing is so limited by own ability to perform it, so it’d be nice to work with some limitless people. Bradley Cooper.” 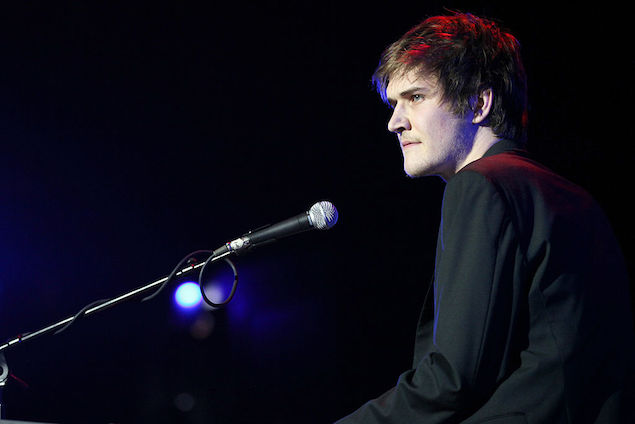