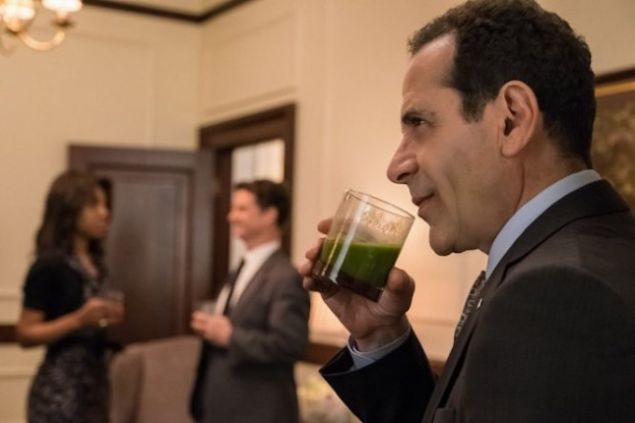 He’s won three Emmy awards and when it was suggested that he because of his past work, he could pretty much pick any project he wanted, he responded, “Ahhh… this is Tony Shalhoub you’re talking to. You may be overstating that I could have whatever role I want, but thank you for the vote of confidence.”

His modesty aside, Shalhoub’s credits indicate that he’s worked consistently over the past 30 years. Now he’s starring in a series that’s being billed as a ‘comedic political thriller.’

That may seem like a lot of genres all rolled into one, but when you break down the series, it really does have all of those elements.

BrainDead is set in Washington, D.C., and follows Laurel, a fresh-faced Capitol Hill staffer who discovers two things: the government has stopped working, and bugs are eating the brains of congress members and various other government employees. As the creepy-crawlers continue to multiply, Laurel and her allies must work quickly to identify the otherworldly creatures, stop their infiltration and, ultimately, save the world.

Shalhoub plays Senator Red Wheatus, a character that he says he was drawn to because, “While he doesn’t start out this way, he becomes a real hardliner,” says Shalhoub, quickly adding, “And, there’s a bit of a ‘Trump-like’ aspect to him in that he just says whatever he wants to say. He’s unfiltered, unapologetic, and as an actor it’s pretty liberating to take on this type of character.”

Playing a republican Senator is no problem for Shalhoub although his personal views skew a bit differently. “I’m happy that my character is a republican even though I’ve always been a democrat or even maybe what would be considered an independent sometimes. It’s so much more interesting to play someone who’s on the other side of the political spectrum than myself.”

Given the current political climate, Shalhoub laughs a bit when asked about the timing of the series. “Well, it really couldn’t be any better, could it? The whole nation is so steeped in this presidential campaign; a campaign that feels like it’s been going on forever, one that’s just inescapable. So, yes, it’s absolutely the right time for a show like this.”

Turning a bit more serious when discussing BrainDead, Shalhoub says, “The really fascinating thing is that the creators and writers, while they’ve fashioned this very intense overall arc to the series, at the same time they’re also very cleverly wrapping things that are currently happening in the news into the narrative. They’re plugging things right into the storyline so there’s such an unpredictable element to this that I think viewers will find that they will be hard pressed to see where we’re going and what’s going to happen next – and I think that’s very much like what we’re seeing in this real life current political cycle that we’re currently involved in.”

In addition to talking specifically about BrainDead, Shalhoub was also hot to discuss the feature documentary Wiener, which follows disgraced New York Congressman Anthony Weiner’s attempted political comeback after his career was derailed due to a widely publicized sexting scandal.

“I highly recommend seeing it because it’s just really captivating in a sort of weird way. But be aware that it’s also really unsettling. Our show walks out on a limb a bit, but if you watch BrainDead and go see Weiner, I guarantee it will put the whole world of politics that we’re portraying on the show in perspective for you.”

With all of the political coverage that’s being pumped out every single day, Shalhoub realizes that many people might think that they’ve reached their personal point of exhaustion with it all, that the last thing they think they need is a drama series that puts politicians center stage, but he hopes that people aren’t too saturated to give BrainDead a chance.

“This show is a comedic political satire with a sci-fi element, so there’s really something for everyone here. The big challenge has been to make it is more absurd, fun, and crazy than what’s happening in the real world, which is actually pretty hard to do given what’s really taking place. Every day when I read the news or watch yet another interview I think it can’t possible get any more bizarre, and yet it does. So, I think people should look at this show as a form of escapism from it all. It’s really funny and instead of laughing at what’s really going on in the real world, you can laugh at us and the ridiculous, silly, almost farcical story that we’re telling.”

As a final thought, Shalhoub adds, “I feel like our show is an intriguing, entertaining, really funny, summer cocktail. It’s the perfect antidote to the high level of anxiety that I think we’re all experiencing, as we get closer to the November election. No matter what side of the political spectrum you’re on, BrainDead isn’t skewed one way or another. I think it’s fairly well balanced when it comes to illustrating and, more importantly, parodying the extremism in present day politics. I just don’t think you can ask for more in a TV series, so tune in a check it out. You’ll enjoy the journey.” 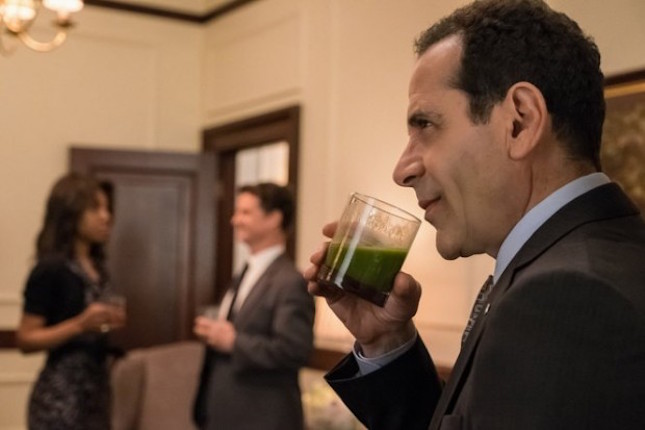