Police Commissioner Bill Bratton today vowed to keep a this weekend’s Pride celebrations safe—but said the NYPD didn’t owe the LGBT community an apology for the 1969 raid of the Stonewall Inn that spurred the modern gay rights movement.

“There’s no doubt denying that out of that terrible experience came so much good, that it was the tipping point,” Bratton said at a press conference at an LGBT center this morning. “An apology, I don’t think so. I don’t think that’s necessary. The apology is all that’s occurred since then.”

When the New York City Pride March will step off on Sunday, and Bratton said he’ll be there—along with hundreds of police officers, as the NYPD plans to step up its security in the wake of a mass shooting at an Orlando gay club earlier this month.

But the relationship between the NYPD and the LGBT community wasn’t always one of protection, something David Studinksi, co-chair of NYC Pride, noted as he praised the police for their partnership in more recent years.

“They are tremendous partners not just this year but for many, many years,” he said. “If you’re aware of where this movement started, you’ll appreciate that irony.”

In 1969, police held an early-morning raid of the Stonewall Inn, a gay bar that has since become iconic, leading to a riot and propelling what would grow into the gay pride movement in Greenwich Village. But Bratton said police departments had grown since then, noting his own appointment in the 1970s as a police liaison to the gay community when he worked in Boston and the growing number of openly gay members of the NYPD today—some of whom were at the press conference.

“We’ve come a long way, as evidenced by the officers who are sitting in the front row here,” he said. “Times have changed and are continuing to change.”

But when Bratton took the stage at a vigil held at the Stonewall Inn last week, he was met with plenty of boos from the crowd—as was Mayor Bill de Blasio. Asked about that today, de Blasio correctly noted the crowd had grown tired of hearing speeches (they were the last to talk) and wanted to hear the names of the Orlando victims.

The mayor said he didn’t take the boos personally and that he was pleased with the city’s relationship with the LGBT. He pointed to evidence of change, including an NYPD vehicle outside painted in rainbow pride colors.

“In 1969, not that long ago,” de Blasio told the Observer, “that would have been so inconceivable there are no words in English for it.”

This year’s pride march is expected to be the largest in history, and will include programming to honor those killed in Orlando. It’s also likely that many present will call for gun control measures as the LGBT community moves to embrace that cause.

Studinksi said he understood if some in the community were nervous—but urged them to come out to the parade. 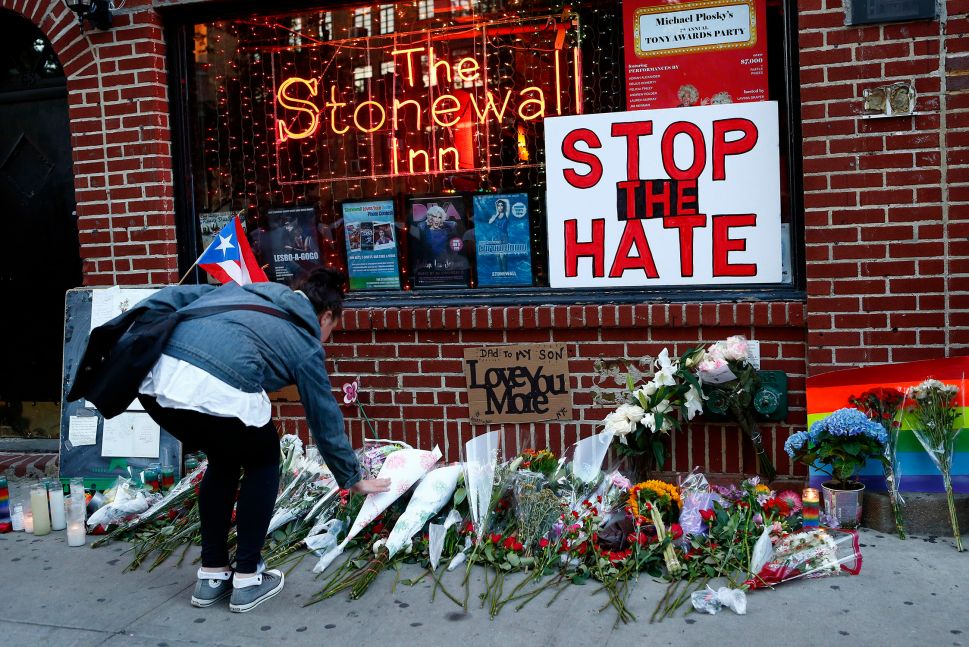