Richard Haass, president of the Council on Foreign Relations—a think-tank in New York—called the Brexit a “wake-up call” for politicians like the former secretary of state and Democratic presidential candidate. The pro-exit votes in the United Kingdom referendum predominantly came from middle-aged and elderly white working-class residents of deindustrialized regions of England, many of them disenchanted with the open trade and immigration policies mandated under EU membership.

That community, of course, resembles Trump’s presumed base in the United States.

“What I think the Brexit vote signals is the intensity of, both the breadth and depth, of the unhappiness with the status quo, with traditional institutions and probably more broadly, a continuing disquiet—there’s probably a better word, but we’ll use disquiet for a second—with, with the real and perceived consequences of globalization,” Haass said in a call with the media, as he drew parallels with English anger aimed at London and the EU’s official seat in Brussels, Belgium with American enmity toward Washington, D.C. “The forces, the political and social and economic forces, that put Brexit over the top, that put ‘leave’ over the top, [Trump] will see as forces that are close to his and Bernie Sanders’ base.”

Prior to joining the Council on Foreign Relations in 2003, Haass served as Director of Policy Planning and special envoy to Northern Ireland during former President George W. Bush’s administration. He also served in the State Department and Department of Defense during the Carter, Reagan and George H.W. Bush administration.

The Council counts among its members numerous leaders from financial firms and government, and it generally advocates a pro-globalization, pro-free trade and pro-European Union—agenda. It is officially nonpartisan and Haass, a registered Republican, has personally advised both Democrats and Republicans. Clinton unveiled her anti-terrorism plan at the group’s Pratt House on 68th Street last November.

Haass argued that the triumph of the anti-EU bloc signaled the dissolution of public faith in the centrist, internationalist, inclusive policies of the 1990s, during the tenure of former President Bill Clinton in the United States and former Prime Minister Tony Blair in Britain.

“I think what this does is it shows that what’s happening in the United States is by no means unique,” he said. “We’re seeing opposition to quote-unquote ‘traditional politicians,’ we’re seeing rejection of what had been decades of bipartisan support for free trade. We’re seeing, again, a street of anti-establishment-ism in our politics.”

“The next four and a half months in the United States are going, to some extent, be formed by the perceived lessons, and the perceived messages coming out of the Brexit vote,” he added.

The build-up to the plebiscite in Britain earlier this week coincided with an protectionist, populistic speech the presumptive GOP nominee made in Soho on Wednesday, an attempt by his campaign to reverse weeks of bad press and plummeting poll numbers. The Queens-born businessman has begun focusing his long amorphous outrage at a “globalist elite,” which he claims has undermined the interests of the United States.

The candidate, in Scotland to attend the reopening of one of his golf courses, blasted out a triumphant press release early this morning.

“The people of the United Kingdom have exercised the sacred right of all free peoples. They have declared their independence from the European Union and have voted to reassert control over their own politics, borders and economy,” he said in the statement, vowing to bring the U.S. and Britain even closer if elected. “Come November, the American people will have the chance to re-declare their independence. Americans will have a chance to vote for trade, immigration and foreign policies that put our citizens first.” 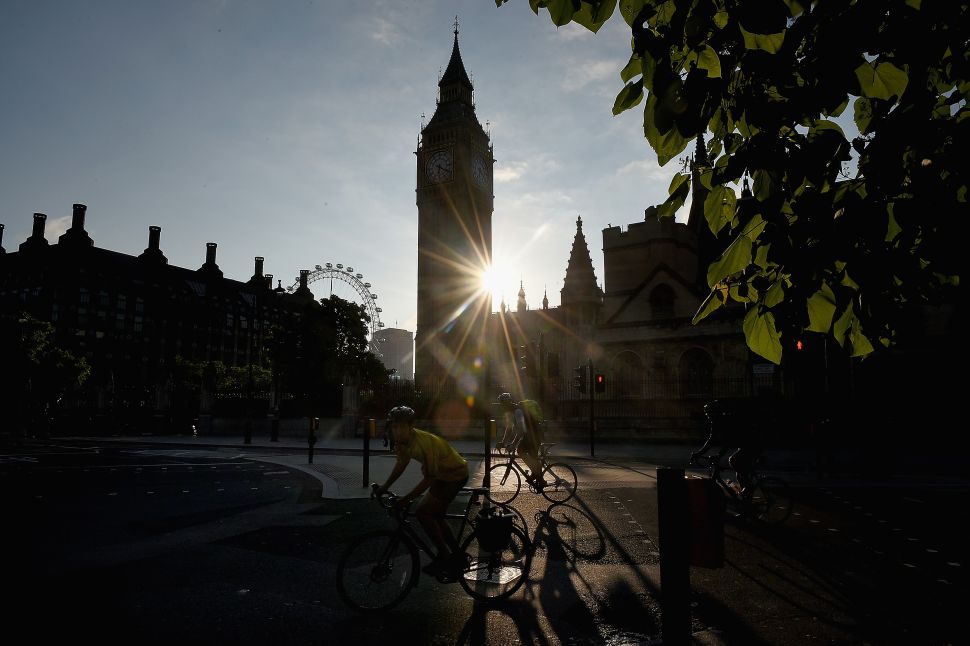