One of the lovely things about having an archaeology degree is linguistic diversity where words that I never thought could be of use, suddenly become apposite, Breccia—rock formed from angular fragments of different rocks cemented together by a mineral gravel. For me, this type of knobbly sedimentary has always been the perfect petrologic analogy of the European Union and even its etymology is a mixture of Italian and German, rooted in the word brecha—to break.

Over the past few months we have seen so many breakings: political parties, the United Kingdom, friendships, the sanity of individuals, institutions and nations. Like nearly every good argument, there have been different phases from both camps: blame, guilt, raw anger, contrition, threat and reductions to the absurd.

The interesting thing is that all of this is so rare in Britain, a nation not given to actual extremes of emotion (outside of soccer stadia), we are the apathetic, the aloof, the sarcastic. Yes, Prime Minister’s Questions in the House of Commons is raucous but that is just an extension of the schoolyard—nobody actually believes what they say, do they?

This is one of the first full referenda of recent generations, the public having been familiarized with the process of the Scottish vote earlier in the year, where independence was very nearly achieved. The problem being is that there are very few yardsticks by which predictions can be properly made as voter turnout is critical in both geographical area and demographic.

Though there are 382 voting areas, there are three large voting blocs—Northern Ireland, London and Scotland and then there is the rest of the country. Northern Ireland, London and Scotland are largely in favor of remaining in the EU—each having their own reasons. If voter turnout is high in these areas, they will have a very powerful voice. But voter turnout in the past has been much higher in Scotland (82 percent in the last referendum) than in London (49 percent in the last elections).

The Remain vote has been trying to harness a Sandersesque momentum, which I am not sure has taken hold, as the youth have only ever known a European Union in the Eurostar age where borders are as open as Dutch coffee shops. The Leave vote has mobilized an aging army, populated by those who grew up in the post war era, when Britain crested on a tidal wave of pride having proven itself to be heroic in the face of impossible odds. They remember when Britain was innovative enough to have created a bouncing bomb and the tenacity to liberate Malta. If the youth care, we will see a remain vote.

The pound has now suffered the largest intraday fall since it floated in the 70s—so get on line and buy a suit.

Gibraltar was the first to poll as their booth opened at 6 a.m. but little can be taken from the rock of my heritage as it will overwhelmingly vote to remain. The acts of petty attrition that will be carried out by Spain if Brexit succeed will be swift, despite the harm that it will cause to Spanish citizens employed in Gibraltar. Note there is a pattern, people who call themselves British—Welsh, Scottish, Northern Irish and Gibraltar, who have managed to balance dual identities for generations—are thought to be in favor of remaining. The English, however, have a much a larger distrust of the rest of the British and, of course, Europeans. Historically, England dictated and has not taken kindly to those it has beaten or saved in war, imposing rafts of laws and regulations.

Some people love the Superbowl, others the World Series, for me few things are better than a presidential debate, an election night or Eurovision and this one is going to be doozy. There will be real pendulum swings—especially as the first announcer on the mainland will be Sunderland, likely to vote Leave. We will see the depressed areas that blame foreign labor for taking the jobs that locals wouldn’t take for fear of jeopardizing their social security checks. Similarly, it is likely that the East Anglian areas—which live off foreign labor—will self-harm and vote Leave to get rid of their workforce. However, it is predicted that the rural constituencies do not hold a great deal of weight if the urban areas come out in force.

One of the best moments will be when Jenny Watson, the Chief Counting Officer (a role made up on Sesame Street) will announce the winner from Manchester Town Hall—my home town. For those who don’t know, this building is both beautiful and tragic as it embodies the North of England perfectly. They used to butcher a magnificent Victorian, Neo-gothic structure: every Christmas they would adorn the 1877 structure with a huge inflatable Santa, which would be shot in short order. For the rest of the winter, Santa would sag listlessly over an edifice demonstrating the pride of the North.

So, as the results have started flying in thick and fast, I have realized this is my way of learning British geography, like where in the world is Uttlesford or Babergh. These rugby club locations of my youth like Fylde and Neath Port Talbot are all voting out as indeed did Sunderland. During the night as well, the Remain advocates are blaming the inclement weather for the turnout in certain urban areas, that the Fates contrived against Europe by the deluge over the course of the day. By 10:18 pm Leave are ahead, and the newscasters are hoping that the big conurbations like Birmingham, Manchester (with an acting mayor) and London are going to save the day.

Well that’s not happened yet, Birmingham have come in with 3,500 votes more in favor of Leave. Similarly, Wales, despite benefitting more per capita from the EU than any other area in Britain, has voted in favor of leaving the EU which has come as a surprise to the pundits.

Despondency is growing as Britain is staring Brexit in the face. This is a prime example of why we have representative democracies and we do not leave decisions like this in the hands of the people.

Both Labour and Conservatives are saying their leaders, Corbyn and Cameron, failed to persuade the populace of the benefits of being part of Europe and their jobs are in jeopardy. Conservative MP’s—even those who supported the Leave campaign—have signed a “Save Dave” letter and pledged their support to Cameron as remaining to serve as the Prime Minister. Other politicians, like Michael Gove or Nigel Farage, may well have a renewed position and profile, when they were largely unknown in the international area previously.

By 11:42 p.m. the pound is plummeting to its lowest level since 1985—there has been a disconnect between the politicians and the public. Approaching 6 a.m. in the UK members of parliament are appearing on TV, stating that they should be commended for giving the people the choice. While Cameron made a referendum a manifesto pledge, this is one of those promises that nobody would have minded if it not have been kept, as the government ran a huge risk of being disappointed. It’s a bit like giving the children the keys to the candy shop and being upset when they gorge. This referendum is showing that it has divided the nation—as can be seen with Scotland overwhelmingly stating it wishes to remain part of the EU, and its voice is muted by the rest of the UK. This should rightly lead to renewed calls Scottish independence.

Now the talk is about is how the threats that were made prior to the vote—that there will be a recession, and that Britain will be given the cold shoulder by Europe—are all hollow. The German car industry stated openly that it does not wish to have any tariff barriers with the UK and predictions are that the rest of the EU will follow. As the night progresses, Leave is nearly 1,000,000 votes ahead, and the commentators are reflecting on the realities of how a divorce would actually work, whether there will be a hard border between Northern Ireland and the Republic of Ireland. Either way, there is a real disillusionment over the nature of the British economy and how it must evolve to cope on the international stage.

With 44 results left to declare, the Remain campaigners—despite now stating that the vote was always going to be close—are praying that the late declarants from London, where there are millions of votes to come in, will provide that surge of a lifeline. Some Northern urban areas did not really come to the rescue as can be seen with Leeds voting remain by 50.3 percent to 49.7 percent. The voter turnout is lower in perceived Leave areas.

At 1:03 a.m. Sky News calls that Leave has won, after the 16,747,740 vote line was crossed and Faisal Islam—their chief political correspondent, my old school mate—speaks eruditely on the fact that there is the possibility of further fragmentation of the United Kingdom. The government needs to assure the markets that there will be a period of stability as the pound has now suffered the largest intraday fall since it floated in the 70s—so get on line and buy a suit.

Formal negotiations have to now begin with the European Union and I am genuinely concerned for Gibraltar and hope there is no sacrifice of its sovereignty. One thing that is certain: it is time for the UK to stop griping about how the EU has dragged it down; it may be able to renegotiate a lesser form of membership but this heralds the crumbling of the European Union as we know it. We will also see a great deal of triumphant whittering from Boris Johnson, the New York born, former mayor of London, who is in his ascendancy. Tonight the British broke the Breccia. 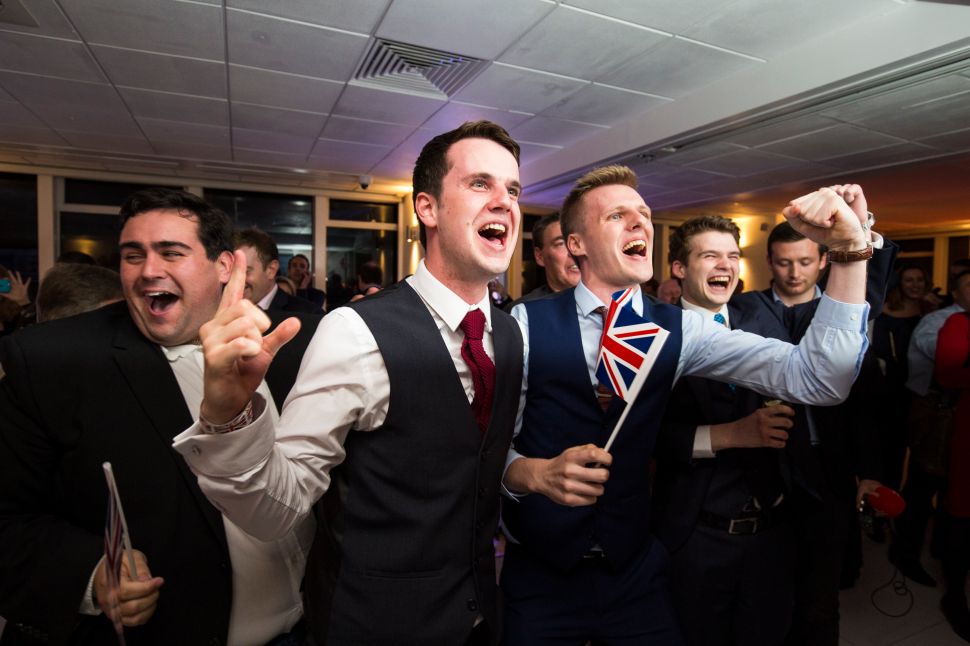