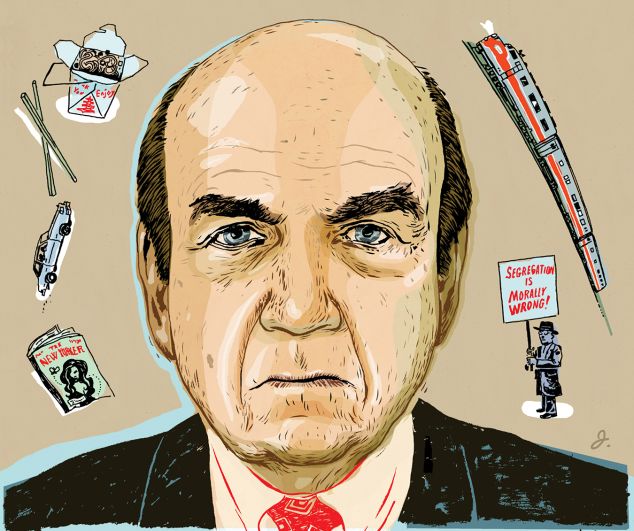 Illustration by John S. Dykes for the Observer
Calvin Trillin.

CORRECTION: Due to a transcription error, the Observer quoted Calvin Trillin saying: “I don’t admire Hillary Clinton.” That was said by the interviewer. We regret the error.

Let me pick a fight with the great Calvin Trillin—a food fight. I love Trillin’s shiv-like “deadline poetry” and his long-form journalism, such as the articles collected in his new book, Jackson, 1964: And Other Dispatches from Fifty Years of Reporting on Race in America, but I take issue with his 2002 New Yorker feature in praise of Shopsin’s. The West Village lunch spot (which has since decamped to the Lower East Side) deserved a V grade for vile, given its erratic bully of an owner, who relished any opportunity to throw out new patrons (including me—I assume the transgression was wearing a suit). Fortunately, Trillin and I share an affinity for Pearl Oyster Bar, the always-welcoming Cornelia Street seafood restaurant, where we chatted about the Deep South of the ’60s and political correctness of today over lightly battered soft-shell crabs.

Can you think of a person who underwent a profound transformation from segregationist to civil rights proponent? Jimmy Carter. He ran against “Cufflinks Carl” Sanders in the Democratic primary for governor of Georgia in 1970. Cufflinks Carl was kind of liberal; he had said some unpleasant things about George Wallace. Jimmy Carter said in some speech that one of his first acts would be to invite George Wallace to the state. He had to get to the right of Sanders, and then when Carter got in—I think it was his inauguration speech—he more or less said the time for all that stuff was over, so he made a switch on a dime.

A federal court the other day ordered the Cleveland MS. school district to desegregate. The school board plans to appeal. Can you think of steps to better enforce Brown v. Board of Education 62 years after the decision? Not just in the South, but around the country people have sort of given up on desegregation in the schools. The schools by some reports are more segregated now, when you take what the percentage is in various schools than they were then. I mean when you read about the hedge-fund guy supporting the charter schools, that’s fine, but that’s really an invitation to abandon the idea of putting everybody together. When the Supreme Court decided Brown v. Board of Education and school districts, I think school districts in Virginia, said ‘Well, we have until next school year” or something like that. There was an argument to be made that if it had actually been enforced right away, we’d have been better off.

Was there a moment while you were on what you call the “seg beat” your anger overwhelmed objectivity? I remember talking to Charlene Hunter, when she was at the University of Georgia. At that point, I thought I knew a lot about the South: I had been there for a while, I had read the requisite books, I knew a lot about the judicial history stemming from Plessy v. Ferguson. And she was talking about coming back home after giving a talk. I said I thought it was supposed to be a great train—The Nancy Hanks, it was called—from Savannah to Atlanta. And she said, “Not where we have to sit.” And all my knowledge of Plessy v. Ferguson and everything just drained away, and I thought, “They can’t make her sit back there.” But I realized, I think for the first time, it’s not personal, and for black people in the South, it was personal every day.

Do you admire any politicians today? John Lewis. I definitely admire him. I’m trying to think of other politicians I admire.

Is there anyone serving in New York, who you think to yourself, ‘I feel very comfortable supporting this person’? I mean I’d vote for someone, but that’s not the same thing.

“Not just in the South, but around the country, people have sort of given up on desegregation in the schools.”

Will transgender bathrooms will emerge as a wedge civil rights issue in 2016? The phoniness of it! You can judge by the fact that, like the voter identification issue, nobody could actually produce a case of this horrible thing happening in the bathroom, in the same sense that people can’t find cases, or any significant number of cases, of people voting who weren’t supposed to be voting because they wouldn’t have to show their driver’s licenses.

I read your controversial poem about Chinese food titled “Have They Run Out of Provinces Yet?” I found it funny. You must be a racist and an Orientalist.

“The talk of potentially endless provinces plays into a stereotype of the Chinese horde and stokes xenophobic fears,” wrote The Stranger, the Seattle alt weekly. Has America gone batshit crazy and lost its sense of humor? Well, I thought that. I was totally blindsided. I’ve written all sorts of celebrations of the Immigration Act of 1965, which is what caused people from Chinese provinces to come here. I wrote at some point that the previous immigration laws, which were skewed towards UK and Northern Europe, and basically had Asian exclusions, were, in culinary terms, suicidal—you had a lot of English restaurants and no Chinese restaurants. I had written in The New Yorker that serious foodies thought of the ‘65 Immigration Act as their very own Emancipation Proclamation. Yeah, I was surprised. The editor of The New Yorker—I had been out of town left a message: “Don’t worry about this flap about your poem.” And I called him, and he had to say about three times, “No, I’m not kidding.”

You often talk about the power of specificity in writing. I heard you say leaning on a car wasn’t funny but leaning on a Pontiac might be. While you’re eating a cheesesteak.

Describe the details you look for when you interview someone? Are there standby tricks you use? Consciously or unconsciously, I used the Ma Nishtana—the four questions asked at Passover—how is this night different from all other nights?

How do you think aging has improved or hurt your writing?  It’s nice to have experience. On the other hand, I think reporting is a young man’s or a young woman’s game. For 15 years I did a piece for The New Yorker every three weeks around the country. I think some of the zest for reporting is gone. Not sure I was ever a natural anyway. I always say I had a slight disadvantage as a reporter—didn’t like to call people on the phone, tell you who I was and what I do. 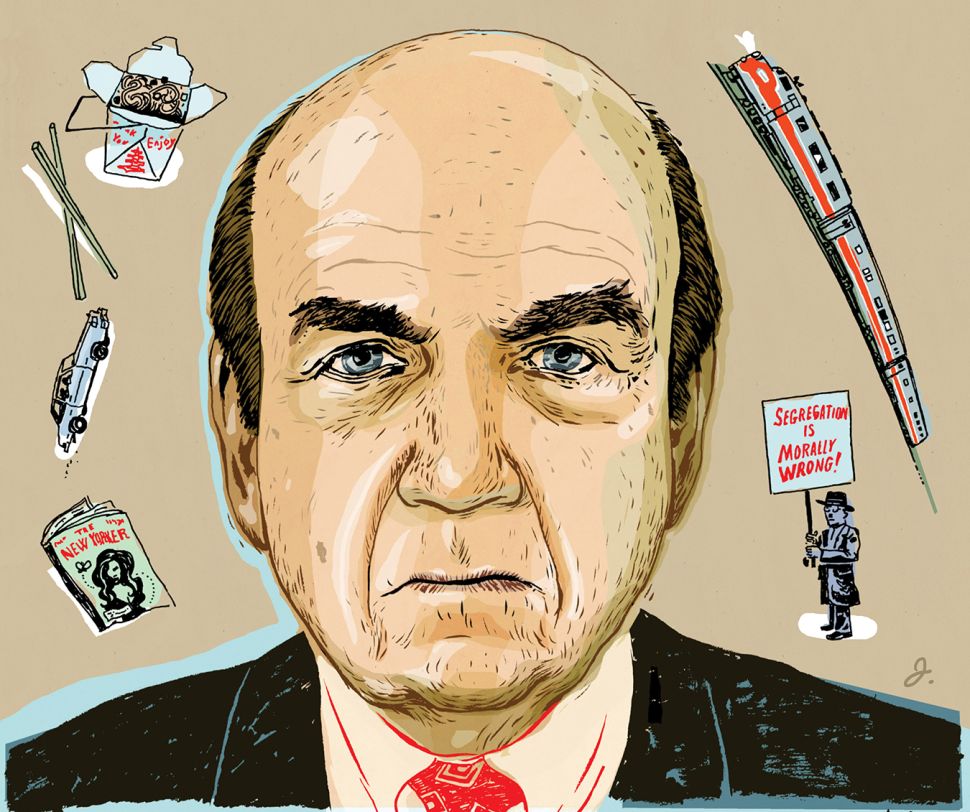