When Americans woke up Friday morning to Brexit, their first reaction was surprise. Not only was a clear win for Leave entirely unexpected, but this was, I suspect, the first most Americans had heard about this thing called “Brexit.” Case in point: News of the vote had largely been absent from the front pages of US papers until last week. And suddenly, it was as if the sky was falling because of something that sounded vaguely like breakfast cereal.

The second reaction, following shock, was an overreaction. America’s political climate is so badly riven with conflict it took only a moment to draw the familiar partisan battle lines. Thus an ugly wave of exaggeration and ridicule swept across the Atlantic. CNN called it “The biggest step backwards since WWII”; Vox said it was “Trumpism, without Trump” and all just “fueled by irrational xenophobia.” From the right, Breitbart cheered that it “Signals the end of the New World Order” and Trump himself held a press conference in Scotland claiming this was Britain “Taking their country back” (ignoring, it would seem, the awkward fact that Scotland voted Remain). Facebook and Twitter were flooded with posts from America either insulting Out voters as stupid or celebrating them as rebels. Here then was a vintage American export: the rhetoric America usually reserves only for domestic political enemies, packaged and shipped abroad.

Let’s be clear: Brexit is neither a romantic Independence Day from a rabidly socialist EU, nor a mass uprising of racist British nationalism. Pretending it’s either one, in an effort to vent partisan anger ahead of November, is both counter-productive and petty. Brexit was a protest against several problems distilled into a single yes/no choice.

For one thing, Leave voters are not proxies for Trump supporters. Britain’s politics contain more divisions than America’s; it’s far less orderly. Britain has six major political parties, arranged loosely from Right to Left as UKIP, Conservatives, Liberal Democrats and Labour, and the more single-issue Scottish National Party and Green Party. Sure, right-wing UKIP supporters voted overwhelmingly to leave, but they’re a small party, with support from just over 10% of Brits; Left-wing Labour, Britain’s biggest party alongside Conservatives, each supported by over 30% of Brits, contributed as many votes to Leave as UKIP, with over a third of Labour supporters voting ‘out’. Their leader, Jeremy Corbyn, is a well-known critic of the EU : he’s said he’s “concerned about the way the European Union is increasingly operating as a free market across Europe: tearing up the social chapter, damaging the working class and workers in Europe”. Which is all to say that the vote wasn’t neatly split along either philosophical or political lines.

To Corbyn, the EU prevents Britain from being socialist enough. He supported the Remain camp in the end, but he may as well have campaigned for Leave: his support was so tepid that fellow Labour party leaders are resigning their posts in protest and 172 voted against him in a no confidence vote Wednesday. Among conservatives, the leadership was split, with Boris Johnson officially leading the Leave campaign and Prime Minister David Cameron putting his job on the line for Remain. The conservative vote was split 42% Remain to 58% Leave. Even the Left-leaning Scottish National Party defies an easy label as it tilts anti-tax since coming into power; although conservatives are her political enemies, SNP leader Nicola Sturgeon stood alongside Cameron. This all makes for a very strange set of alliances, especially if you’re accustomed to America’s cleaner divisions. Imagine, though, Bernie Sanders campaigning with Chris Christie against 30% of Hillary supporters, who happen to side with Ted Cruz. In America, this would never happen, but that’s a rough approximation of where loyalties stood in Britain.

It’s further complicated because one of the core issues is immigration, which is about the most vexing one of all, with as wide a range of policy disagreements as you can find. Americans are familiar with how complex and contentious immigration debates can be—so you’d think they’d cut the Brits some slack and be careful with charges of racism. Yes, some Leave voters were no doubt motivated by racism (although most EU migrants are not ethnic minorities) and there have been sad stories of xenophobic graffiti, even attacks following the vote. But another take on EU migration flips the racism argument on its head: some polls showed a third of ethnic minority voters supported Leave, among them South Asians most strongly.

Here’s why: Because EU rules set no limits on EU migration, and Britain has been forced to restrict non-European immigration, Brits of Indian or Bangladeshi origin who voted Leave often did so because they felt EU rules ultimately discriminate against people from non-European backgrounds, even those from Commonwealth countries. Some felt an EU thumb on the scales in favor of white Europeans with few or no ties to Britain.

But that’s not a large swath of voters. Many Brits were simply eager for more of a say in who can live and work in their country. Under EU rules, anyone from another EU country can live, work and receive benefits in another EU country—no work visas, no interviews—and it’s difficult to deport EU criminals. That’s the bargain, and it’s one that many feel is a raw deal.

Cameron’s own plea to the EU before the referendum was to allow Britain to require EU workers to live in Britain for four years before claiming certain benefits. He didn’t get these concessions, obviously, and now Britain will have to figure out its immigration policy from scratch. For Americans who are confused: Picture a situation in which America voted to force Congress to throw out all existing immigration laws and start from square one. Much as many might like such an outcome, it’s going to cause some complex issues.

Then there’s the notion that pulling out of the EU is a brave feat of free market capitalism. Even if it’s painful now, it’s worth it in the long run, the argument goes. It’s undeniably painful in the short run: yes, UK markets did bounce back somewhat from the initial shock, but the pound is still at its lowest levels since the 80’s and $130Bn was wiped out of the FTSE (with many companies holding pensions and savings) in two days – that’s almost five times as much as UKIP’s leader Nigel Farage famously claimed Britain gives away to Europe every year. Yes, Europe can have onerous, sometimes silly regulation, but Britain’s economy has done very well within the EU, and is now growing as fast as the US with unemployment diving to just above 5%. Some of Europe’s pro-market regulation goes so far as to stop Britain from putting up tariffs, preventing it from propping up an uncompetitive industry like steel. One popular regulation British consumers could look forward to until now was the elimination of roaming charges across the EU. Ultimately, the EU is a massive common market of 500 million people (almost 200 million more than in the US), however Socialist individual countries might be, and Britain just cut off its unfettered access. That’s not a vote for the free market: that’s a vote against globalization with your nearest neighbors. American translation: Imagine if California pulled out of the United States, and now had to renegotiate all customs, tariffs and trade restrictions.

But the biggest issue with turning Brexit into a vicarious battle between America’s Left and Right is this: it adds undue vitriol and anger at a time when Britain and Europe need unity and support. Britain faces an unprecedented leadership crisis ahead of its negotiations with Europe: Cameron has resigned, but it’s unclear which conservative will replace him. Labour is in chaos. And there will be more than Brexit to negotiate: Northern Ireland is part of Britain, and borders the country of Ireland, which is part of the EU—a split from the EU will require border controls on the Irish border that has been largely informal since the end of Northern Ireland’s bloody conflict in the 1990s. Scotland might push for its own referendum to break away from Britain and re-join the EU, shattering a 300-year old union.

And that’s not all. European elites are poised to seek punishing terms for Britain, to set an example. They’ve already rejected the idea of any “informal” negotiations. In a masterful stroke of preterition, French President Francois Hollande had already threatened British voters ahead of the vote: “I don’t want to scare you but I just want to say the truth. There will be consequences in many areas.” He was talking about France giving up its agreement on border protection in Calais, where refugees seeking access to Britain have set up camp at the French entrance to the Channel Tunnel. Angela Merkel is urging caution, saying negotiations cannot be rushed, but there are few signals this will be a friendly “conscious uncoupling.”

And in the middle of that chaos, we have Americans yelling at each other and pretending that this is a simple proxy battle in their domestic ideological war. This, of course, at a time when America’s support would go a long way to nudging Britain and Europe towards better cooperation. There’s already a determined movement trying to establish a rapprochement between Leave and Remain, to help get a better outcome for Britain and for the EU. So please, Americans, the British do not need your partisanship right now. Wish the parties well, hope for the best, and please, don’t drag them into a pre-November brawl instead. This is one American export we can all do without.

Christine Nikol is a former management consultant with a background in politics and journalism. She writes from London, where she works as an EU migrant, for now. 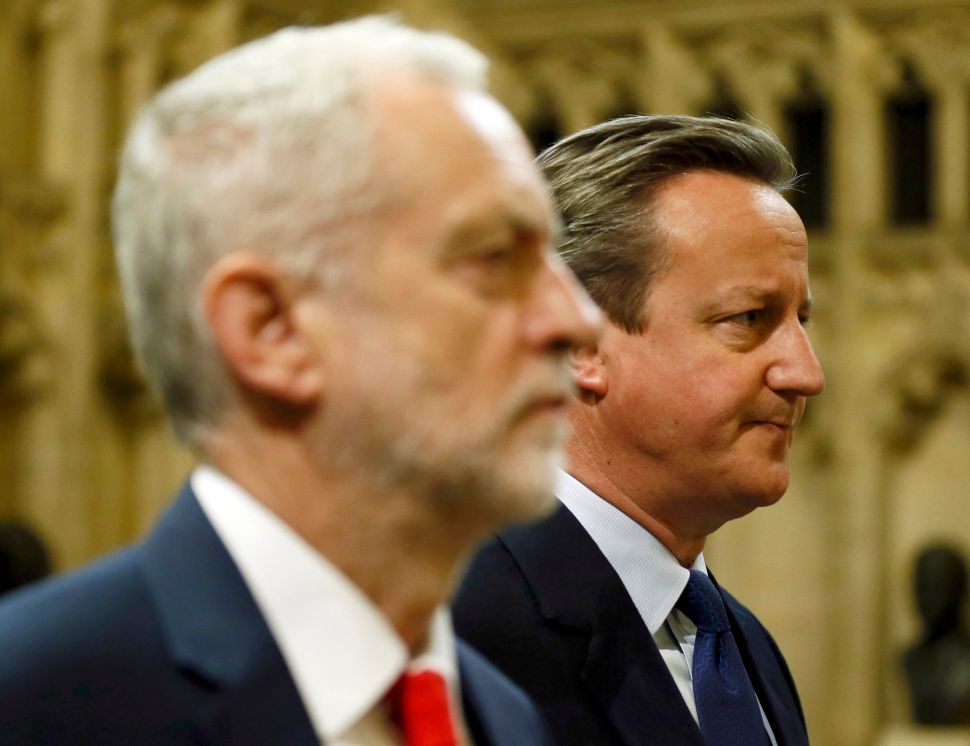