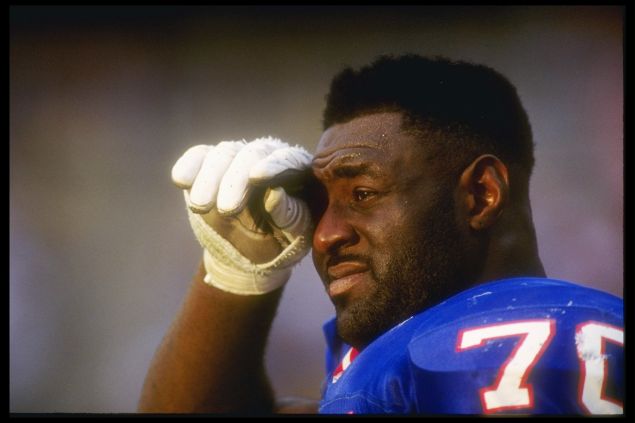 Leonard Marshall of the New York Giants in 1991. Marshall believes he is suffering from CTE caused by head trauma from his playing days. (Photo: Stephen Dunn /Allsport)

When ex-Super Bowl champion Leonard Marshall took the stage at the Cannabis World Congress and Business Expo at the Javitz Center in New York on June 16, he still looked like he could go out and play a few downs. The 54-year-old former defensive tackle remains a mountain of a man, and he doesn’t have the gut that often forms on retired athletes as muscle mass softens. But not all is right with Marshall. He has ruptured disks in his back and fused ankles. More worrisome, however, are the headaches, the tremor and the short-term memory loss he battles. In 2013, UCLA researchers told him he exhibited signs of chronic traumatic encephalopathy or CTE, a progressive neurodegenerative disease linked to head trauma. Marshall was one of the ex-players who won a $1 billion concussion lawsuit settlement from the NFL. For relief from his symptoms, he turned to a compound found in cannabis, which is why he was at the expo, along with other former NFL players, to advocate for cannabinoid research.

“Share this with your community of people that you know that are associated with sports, that have had to deal with traumatic brain injury,” Marshall told his audience. “My quality of life has improved because of this.”

Marshall was referring to cannabidiol, also known as CBD. A non-psychoactive compound found in the cannabis plant, CBD extract is sold in vials, pills, and sprays, as well as CBD-infused skin creams, shampoos, lozenges, lip balms, even dog treats, all of which are sold legally as dietary supplements. CBD extracts have trace amounts of THC, so the legality of CBD products is murky and legality varies from state to state. But generally speaking, CBD can be shipped across state lines if it contains below .3 percent THC. However, the quality of the product differs depending on whether manufacturers are forced to extract the compound from industrial hemp (to ship to states where medical marijuana is illegal) or whether they can use the cannabis flowers and buds (which have a much higher concentration of both THC and CBD).

Former Bears quarterback Jim McMahon told the Observer he was eating 100 Percocet pills a month for over two decades. He developed the habit early in his career to deal with a body that was constantly hurting from injury and the sport’s brutality. His opiate consumption continued into a retirement filled with searing headaches and constant pain.

“I was pretty beat up when I quit,” McMahon said. He credits marijuana for helping him conquer his pill addiction and now uses the drug to manage his chronic pain. “I’m going with what God made now,” he said.

The other major medical benefit of CBD is unique to the compound. Several studies have shown that CBD has neuroprotective qualities, which means it apparently protects the brain from injury. 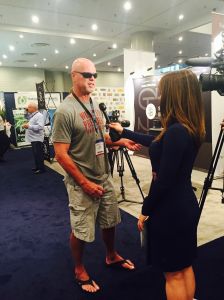 Former Bears QB Jim McMahon was at the Cannabis World Congress and Business Expo to advocate for medical marijuana in the NFL. (Photo: Josh Keefe/Observer)

Dr. Ethan Russo, a neurologist and the medical director of Phytecs, a biotechnology company developing products from natural plant compounds, called the cannabidiol “the most promising agent that I’ve seen in terms of its likelihood of exerting this kind of protective action on the brain after traumatic injury.”

So far, most of the scientific evidence of CBD’s ability to protect the brain from injury and aid recovery is based on animal studies. Recent studies have shown that CBD reduces the damage from brain injury in newborn pigs and rats. But there is anecdotal evidence for its effect on children with seizure disorders.

Heather Jackson saw the results first hand. Her son Zaki had over 500,000 seizures by the time he was five years old. Jackson tried 17 different pharmaceuticals to help Zaki to no avail. But Jackson heard the story of Charlotte Figi, a Colorado girl with Dravet syndrome, a rare form of epilepsy. Figi was successfully treated with a strain of high-CBD and low-THC medical marijuana. Jackson started administering the same strain to Zaki and his seizures stopped altogether. Zaki, now 13, has been seizure-free for three years, taking 100mg of CBD oil named Charlotte’s Web, after Figi, and nothing else.

Jackson is now CEO of Realm of Caring, a non-profit organization sponsored by CW Botannicals (creator of Charlotte’s Web), which is dedicated to supporting families using cannabinoid therapies. In March, Realm of Caring launched When the Bright Lights Fade, a campaign that raised $100,000 to fund studies researching the relationship between cannabis use and CTE symptoms in current and former NFL players.

“I have become friends with these former NFL players, and I mean they are in bad shape,” Jackson told the Observer at the expo. “They’ve been sort of, in my opinion, used up for entertainment and spit out.”

Earlier this month, the Denver Post reported that Realm of Care supporters, including former NFL quarterback Jake Plummer and ex-Baltimore Ravens tackle Eugene Monroe met with NFL medical staff to discuss CBD.  Monroe, who was just released by the Ravens, told the Post that the meeting represented “progress, but progress wasn’t enough.”

When reached for comment about the use of CBD, the NFL said, “Policies in this area are collectively bargained and are NFL-NFLPA programs. We are guided by medical advisors. They have not indicated a need to change the policy. If they did, we would consider exploring changes.”

The NFLPA (National Football League Players Association) didn’t respond to a request for comment, but in March they issued a nearly identical statement in response to Monroe’s call for the league to allow players to use medical marijuana.

Advocates like Jackson believe the league has given neuroprotectants short shrift.

“They spent $100 million on concussion research. But not one buck on a known neuroprotectant,” she said. “We got to get rid of the stigma.”

“I fully believe that TBI and encephalopathic injuries, head trauma, blunt trauma, is completely tied to both the military experience and the NFL,” said Judge at the Expo. He believes the NFL could be a powerful voice for the treatment and prevention of brain injuries that afflict both football players and veterans. “They have the money and they have the resources,” he said.

“They spent $100 million on concussion research. But not one buck on a known neuroprotectant,” Mrs. Jackson said. “We got to get rid of the stigma.”

Some neuroscientists are skeptical of the benefits of CBDs. University of Pennsylvania neurologist Dr. Marcel Bonn-Miller, who will be one of the lead researchers on the studies funded by When the Bright Lights Fade, warned that much of what we know about CBD’s neuroprotective qualities are from animal models.

That hasn’t stopped companies from trying to turn a profit, or making questionable claims about the substance’s efficacy. 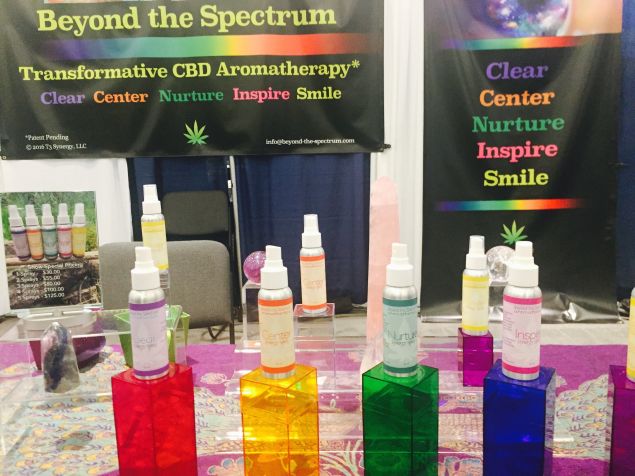 All variety of CBD products were on display at the Expo. (Photo: Josh Keefe/Observer)

However, one would expect CBD-based products to actually contain CBD. Last year, the FDA sent warning letters to seven companies marketing CBD based products after testing found many products didn’t contain CBD at all. Hucksterism and snake oil is bad enough in any industry, but many times these products take advantage of families with sick children who are looking for to provide relief from seizures or symptoms of neurodegenerative diseases.

“What I’m concerned about is those guys coming in, stealing money from sick people and removing hope,” said Jackson, who works with thousands of families through Realm of Caring. “There’s probably going to need to be some national standards set.”

Of course, the best way to ensure any treatment is safe and effective is to put it through the FDA’s drug approval process. Several smaller pharmaceutical companies are trying to bring drugs to market that harness the neuroprotective qualities of CBD. In March, GW Chemicals announced positive results in the phase 3 clinical trials of the CBD-based drug Epidiolex for the treatment of Dravet syndrome. Kannalife, which is owned by Medical Marijuana Inc., is currently raising B funding with the goal to start clinical trials on CBD and the company’s CBD synthetic. The trials will examine the compounds’ efficacy as it relates to Hepatic Encephalopathy (HE), a degenerative brain disease caused by a buildup of toxins in the liver, and CTE.

Kannalife chairman and CEO Dean Petkanas said he could envision a future in which CBD is given regularly to high school football players as a preventive and administered in the first few minutes after a brain injury.

“These drugs are like prophylactics,” said Petkanas. “You’re going to use the drug to protect yourself against the potential that something might happen and you left yourself unprotected.”

In spite of the helmets and shoulder pads, many ex-players feel they were left unprotected by a league that turned a blind eye to the long-term effects of concussions and head trauma. And while CBD-based pharmaceuticals could help the next generation of football players, many of these ex-players need help now. Dr. Bonn-Miller said that he’s most concerned about finding ways to use cannabis to help alleviate symptoms and improve quality of life for players suffering from pain and head trauma.

“We need to figure this stuff out,” Dr. Bonn-Miller said. “It’s too rough what’s going on. Seeing these guys? It’s rough.” 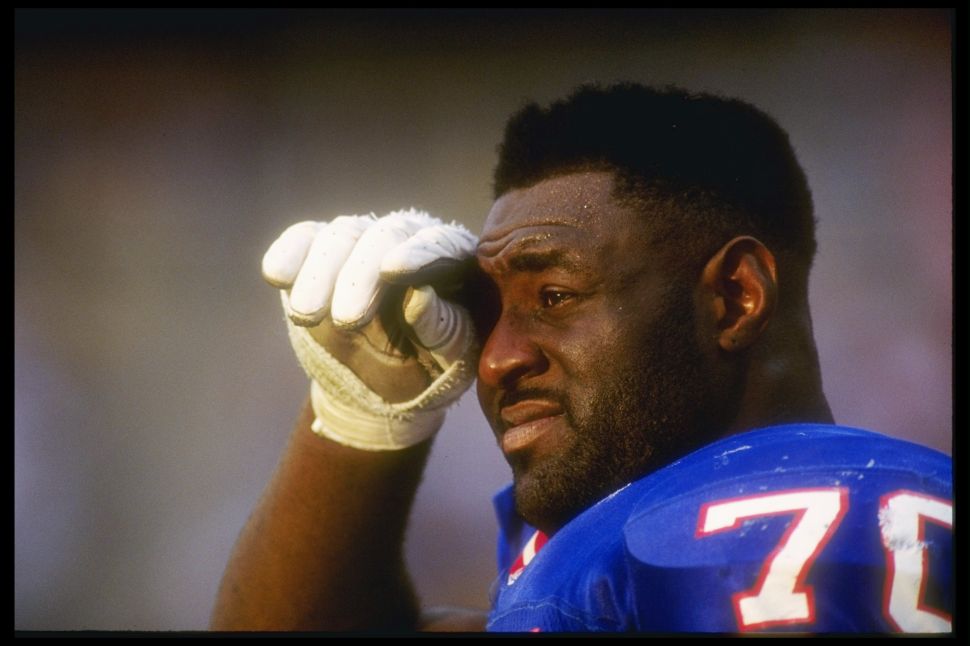