Imagine it: a countertop kitchen appliance resembling a Magic Bullet blender. This is the bioreactor. It is attached, via a drip, to a supply of nutrient-rich serum, which feeds the cells growing within the reactor. As the cells multiply, they provide you and your family with all of the meat you will ever need. No more traveling to the supermarket to pick up pork chops for dinner. No more contending with the rising cost of steak. No more worrying about the spread of mad cow disease, E. coli and other foodborne pathogens. No more feeling guilty for the ethical and environmental toll of making your famous fried chicken. Just safe, affordable, readily available meat from the convenience of your kitchen. The only catch is that it’s insect meat.

That is the dystopian vision portrayed in “Stir Fly,” an installation by artists/researchers Oron Catts and Ionat Zurr in collaboration with designer Robert Foster. As part of Field Test, an exhibition exploring the future of food, “Stir Fly” was being shown at Science Gallery Dublin before the installation literally exploded, likely due to a buildup of gas. (No one was harmed and nothing besides the exhibit was damaged.) The exhibition is now finished.

“This is another problem around trying to grow stuff,” says Catts in reference to the explosion and the litany of other issues he’s found with tissue engineering.

While at first glance “Stir Fly” appeared to be an example of speculative design, a kind of hopeful prototype, its substance revealed its critical nature. The danger of household explosions involving possibly biologically hazardous materials aside, “Stir Fly” underscored one of the most contentious aspects of tissue engineering: it’s use of fetal bovine serum. Harvested from unborn cows, typically by puncturing the heart of the fetus after the pregnant mother is slaughtered, fetal bovine serum is essentially food to the cells in the bioreactor, allowing them to grow and multiply into meat for our consumption. Not only does the process used to extract calf’s blood for fetal bovine serum make the final product far from vegan (as many purveyors of tissue-engineered, or “in vitro,” meat would have you believe), but growing cells in this way is also grossly inefficient. Catts estimated that two liters of fetal calf serum – requiring the blood from about four calves – along with 18 liters of other nutrients were necessary to produce a miniscule amount of cells in the bioreactor for “Stir Fly.” The installation aptly captured the horror inherent in producing fetal bovine serum by transmogrifying the serum into insect meat; it captured the inefficiency of producing in vitro meat by suspending 20 liters of nutrients above the small bioreactor, suggesting that reality was just waiting to come crashing down on our hi-tech missteps.

“Stir Fly” was only the latest manifestation of what Catts likes to call “contestable design.” Rather than producing desirable scenarios, as is typical in speculative design, Catts has built his career on developing scenarios that accentuate the problematic.

“We have the somewhat Frankensteinian tendency of trying to grow every tissue that constitutes the body for more and different reasons,”  Catts said of his team’s work.

In 2000, he and his team grew “Pig Wings,” wing-shaped collections of pig tissue which poetically highlighted the improbability of tissue engineering proponents’ outlandish promises (“… when pigs fly”). 2003’s “Disembodied Cuisine” saw Catts growing and eating in vitro meat, making him part of the first team in history to do so but also exploring cultural perceptions of what is edible through the project’s use of “frog steak.” 2004’s “Victimless Leather” involved growing a tiny leather jacket made out of mouse and human cells, which ultimately put the Museum of Modern Art’s exhibition curator in an ethically ambiguous position when she pulled the plug on the piece, effectively “killing” the jacket.

Catts’ interest in tissue engineering dates back to the mid ‘90s. While working on a thesis about designer biotechnology, he was struck by images of the “Vacanti mouse,” a lab mouse which had what looked like a human ear grown on its back by researchers. Though Catts was previously focusing on the use of bacterial cellulose to genetically engineer plants, he shifted his attention to tissue engineering.

“The idea of fragmenting complex bodies and growing parts of them in artificial environments became very interesting,” he said. “I found that has much more interesting potential to deal with highlighting some of the problems that I started to identify then.”

Inspired, Catts went on to found The Tissue Culture and Art Project with Ionat Zurr in 1996, which would be the venue through which the team would develop most of their artwork. In 2000 Catts helped established the University of Western Australia’s SymbioticA, a first-of-its-kind research laboratory in the biological arts, which has hosted 120 researchers in addition to 16 years worth of students. Catts remains SymbioticA’s director, and beginning in January 2016, he became the Royal College of Art in London’s very first professor of contestable design, through which he hopes to reintroduce his approach to art as a discourse on design.

While Catts explained that he isn’t interested in developing a dystopic (or, for that matter, utopic) idea of where tissue engineering will take us, he undoubtedly remains sceptical of the technology’s practical applications. Proponents have claimed that tissue engineering can alleviate the cruelty, scarcity and environmental degradation of not just traditional meat production, but that of leather too. This seems unlikely to Catts. While in vitro leather is still reliant on fetal bovine serum (meaning it must involve some degree of animal cruelty), it also requires the development of new techniques to coax cells to produce collagen, the protein which makes leather both strong and durable. Catts predicted that, considering the amount of resources in vitro leather’s production requires, it will at best be a specialty product, unable to compete economically with conventional leather, which is a byproduct of the meat industry. He estimated that an adult-size in vitro leather jacket would cost tens, if not hundreds of thousands of dollars. And while traditional manufacturing processes can lower per-unit costs through upscaling, Catts imagined that this will be one of in vitro meats’ and in vitro leathers’ biggest hurdles. Tissue engineering requires the creation of an artificial environment that is conducive for cells to thrive – but only the cells necessary for production. Other lifeforms must be kept at bay, either through sterilization, which is extremely expensive, or toxicity, which is by definition dangerous to the natural environment. Not cruelty free nor economical, nor environmentally friendly, Catts sees in vitro meat and leather as nothing more than the technologically excessive luxury products of the future.

As for his own future, Catts is most immediately looking forward to the Shuffle Festival, a 24-hour celebration of art, science, history and food in and around a London cemetery-turned-park. For it, he and his team will be building an abstract statue based on the story of the golem, a creature from Jewish folklore brought to life by a rabbi to protect Jews in Europe. Catts’ golem will be built from cemetery mud and “brought to life” through cell incubators, which will be heated with compost. Beyond the Shuffle Festival, Catts is excited about 2018, which happens to be the bicentenary of the publication of Frankenstein. “I can see quite a lot of projects brewing around that,” he says. 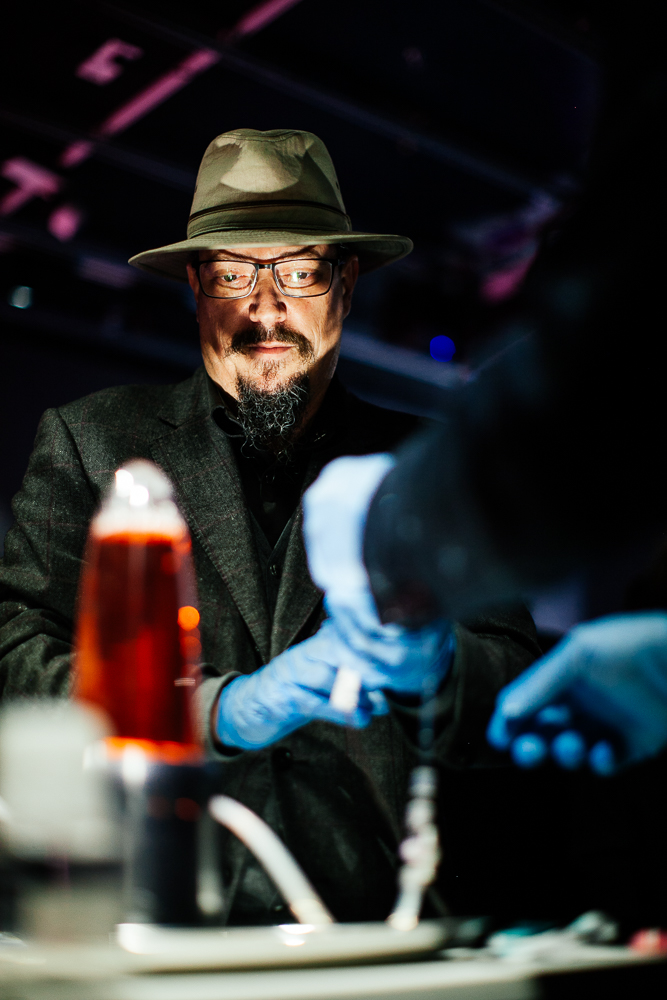