The City Council passed an $82.1 billion budget today—up from $78.5 billion last year—over warnings from some members that they might be serving New Yorkers an overstuffed and undercooked bird.

Speaker Melissa Mark-Viverito and Finance Committee Chairwoman Julissa Ferreras-Copeland reiterated the praise they first lavished on the spending plan last week at a press conference with Mayor Bill de Blasio. In particular, they applauded how the city’s executive and legislative branches had come to their earliest budget agreement in 15 years—and that they had secured funding for youth summer jobs programs and anti-hunger initiatives.

But it was precisely the future that frightened Manhattan Councilman Daniel Garodnick, who once sought to become speaker himself. He warned that the city is expanding its workforce—the headcount up 25,000 since Mr. de Blasio entered office—while not stashing enough cash for stormy weather.

“This is, in my opinion, too big a leap too fast and without sufficient reason,” the pol said, noting that the city won’t be flush with funds forever. “We are all thankful that New York’s economy is currently strong, but the reality is that no economy stays that way forever. As a city, we must take steps now in good times to prepare for the inevitable bad times ahead. Progressive, honest and responsible budgeting protects people not only when revenues are strong, but when revenues are weak.”

Nonetheless, Garodnick joined the vast majority of his colleagues in voting in favor of the budget provisions. Lower Manhattan Councilwoman Rosie Mendez, however, did not.

Mendez recalled her surprise last week when she learned that, while she was in the hospital getting x-rayed for an injury sustained at City Hall, her colleagues were announcing the budget deal with the mayor. She noted her borough’s delegation had held just 20 hours of meetings on the spending plan before the Council forged the agreement.

“I didn’t feel that it was very inclusive, and I am having problems with the stability of the inflation to the budget,” she said. “Last year, we rushed to a budget as well, and there are still problems with some of my allocations that we’re still trying to solve. And for all of those reasons, I do not feel comfortable voting in favor of this budget.”

De Blasio didn’t let the naysayers dim his enthusiasm for the speed and size of the spending plan.

“Today’s Council vote marks the earliest adoption since 2001 and further highlights the good work that can be done when the administration and City Council come together. The adopted budget is responsible, progressive, and honest,” the mayor said in a statement to the press. “This budget will touch New Yorkers across every borough.” 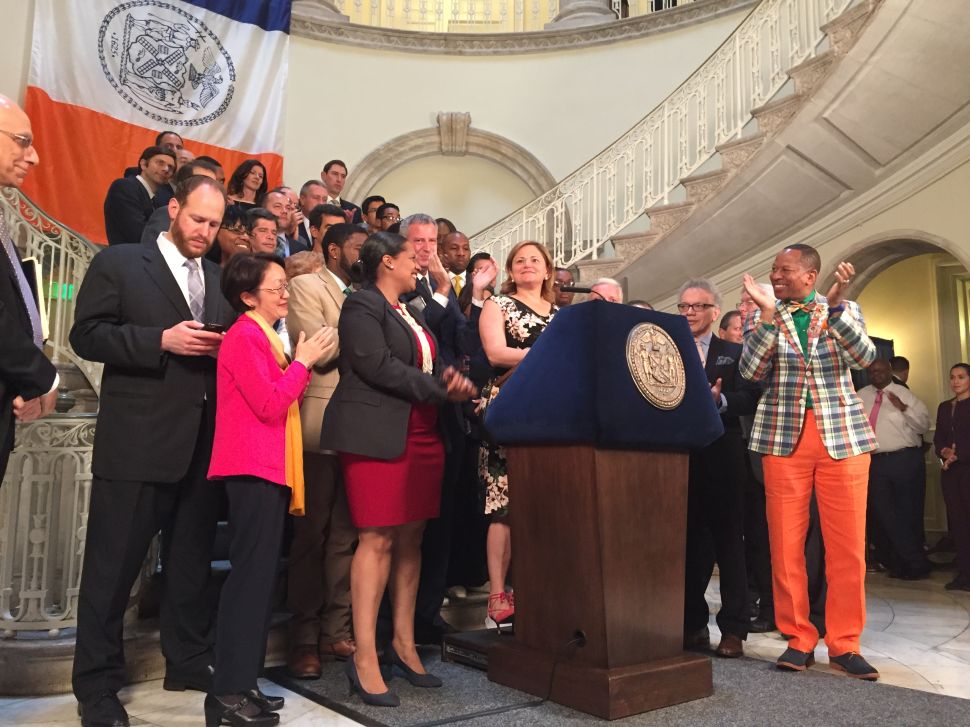