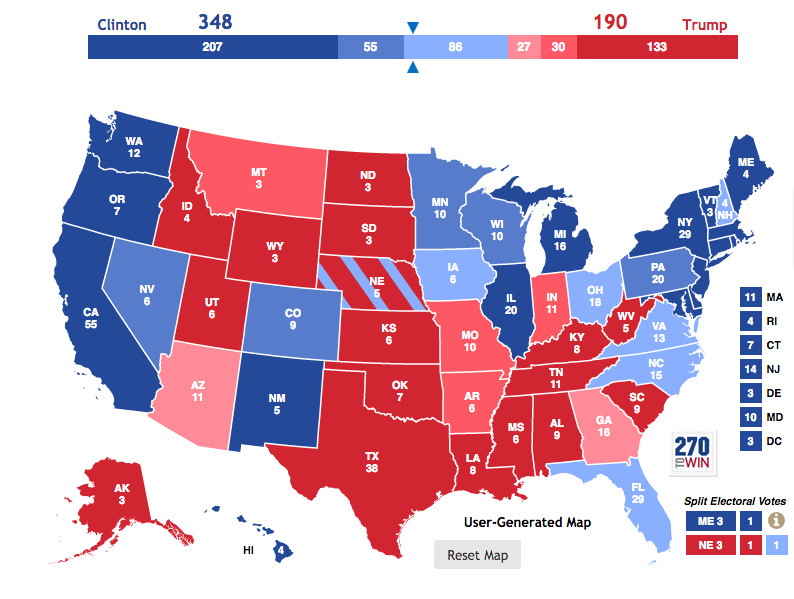 In partnership with 270ToWin.com, which has provided an interactive electoral college map to the Observer, the Party Crasher is pleased to present his first overview of the upcoming presidential election.

Based on available polling data, historical data and the existing conditions on the ground, this column’s initial forecast shows Democrat Hillary Clinton easily defeating Republican Donald Trump by a 348 to 190 margin in the Electoral College. This premier forecast hedges no bets, offering no “toss-up” states and assigning every state to one candidate or the other, in six categories: safe, likely and leaning Democratic, and safe, likely or leaning Republican.

This forecast will differ in some respects from the other leading prognosticators, and will provide explanations in the coming paragraphs.

First, let’s take a look at the safe states. Despite Trump’s frankly delusional claims that he is going to compete for the electoral votes of California and New York, history and common sense indicate no chance that either of these two electoral-vote giants will go red this year or anytime soon. California, with 55 electoral votes, is one of the most solidly Democratic states in the nation, with all statewide offices and nearly two-thirds of its legislature in Democratic hands, and it hasn’t voted for a Republican presidential candidate since 1988. New York, with a roughly five-to-three Democratic voter registration edge, hasn’t gone into the red column since 1984—and then just barely. Republican presidential candidates do well to hit the 40 percent mark in the Empire State.

Other states the Party Crasher forecast considers safely in Democratic hands include a number of states, as well as the District of Columbia, that no serious follower of politics would dispute: Illinois, New Jersey, Washington, Massachusetts, Maryland, Connecticut, Oregon, Hawaii, Maine, Rhode Island, Delaware and Vermont. Not a single one of these jurisdictions has gone Republican in a presidential race since 1988.

But the Party Crasher breaks with several other leading prognosticators by also characterizing Michigan and New Mexico as safely Democratic.

There has been a lot of talk about Michigan being a state where Trump can appeal to working-class white voters, but this ignores the fact that Michigan has not been closely contested in a presidential race in a very long time. President Barack Obama won Michigan in his reelection bid by more than nine percentage points. Over the years, in both presidential and Senate races, Republicans typically poll surprisingly well in the Wolverine State in the early stages of the race, but fall decidedly behind by the fall and lose badly. There is no reason to expect that Michigan, which has gone Democratic in six consecutive elections, is going to be closely contested this year.

As to New Mexico, Trump’s likely pratfall with Latino voters will take this state off the board, and frankly, it was already there. Some prognosticators tend to rate New Mexico as “leaning” rather than safe Democratic due to the fact that it narrowly went to George W. Bush in 2004, but Bush’s performance among Latinos was unusually high for a Republican. The Land of Enchantment has gone Democratic in five of the last six presidential races, and by large margins in all cases but one (2000).

In all, the Party Crasher rates 16 states and the District of Columbia safe for Clinton, with a total of 207 of the 270 electoral votes she needs to claim the White House.

On the Republican side, there is little dispute that 17 states with a total of 133 electoral votes would be considered safe for Trump. Thirteen of those states, with a total of 101 electoral votes, have gone Republican in at least nine consecutive elections, and none at this time show any likelihood of budging from the red column. They include: Texas, Nebraska, Alabama, South Carolina, Oklahoma, Kansas, Mississippi, Utah, Idaho, Alaska, North Dakota, South Dakota and Wyoming. Pay no attention, at this point, to early polling showing states such as Kansas and Utah being competitive. Neither one of these states has gone blue since 1964, and Utah frequently delivers more than 70 percent of its votes to the GOP candidate. Trump may not be especially popular among Mormons, but he has a lot of room to fall before he loses Utah.

Moving to the next level, the Party Crasher considers five states with 55 electoral votes to be “likely Democratic” in the fall. These include Pennsylvania, Minnesota, Wisconsin, Colorado and Nevada. This characterization is more bullish on Democratic chances than the forecasts of other prognosticators, so some explanation is in order.

First of all, Pennsylvania and Wisconsin were last in real doubt in 2004. Neither has gone Republican in at least the last six elections. While they are chock-full of the white, working-class voters that Trump supposedly will appeal to, Pennsylvania also has a large number of black voters in Philadelphia who routinely provide a greater margin for the Democrats than the rest of the state does for the Republicans. This is not a pattern that is likely to be upset. In Wisconsin, Milwaukee and Madison provide such large blocks of Democratic voters as to override the rest of the state. This pattern, also, is unlikely to be upset. Minnesota is slightly more Democratic than Wisconsin in most elections and hasn’t voted for a Republican presidential candidate since 1972, the longest Democratic streak of any state.

This forecast is also much more bullish on Democratic chances in Colorado and Nevada than most other forecasters are. This has to do with the influence of the Latino vote in both states, and with polling showing Trump on a path to do extremely poorly among Latinos, it is hard to see where he makes up that ground. Both Colorado and Nevada went for Obama both times, and neither was particularly close either time. It is difficult to envision how Trump improves his position in these states.

On the GOP side, the Party Crasher forecast lists four states with 30 electoral votes as “Likely Republican”: Indiana, Missouri, Arkansas and Montana.

Indiana has gone Republican in every presidential election but one since 1964, flipping narrowly to blue in 2008 for Obama, then flipping back to red by a 10-point margin in 2012. Missouri, which used to be the ultimate bellwether state, has gone red in four straight elections, barely picking John McCain in 2008 before comfortably going to Mitt Romney four years later. And Montana, which last went Democratic in 1992, narrowly went to McCain in 2008, then decisively for Romney in 2012. The only way any of these states flips to blue in 2016 is if the election turns into a Democratic rout.

The surprise on this list is Arkansas. Let it be stated up front that The Party Crasher does not really expect Arkansas to be competitive, but there is enough of a possibility that Trump may lose badly enough that the Clintons’ ties in that state could make it competitive—but only if the national contest is an absolute Democratic avalanche. It isn’t especially likely in a state that has moved hard right since Arkansas native Bill Clinton’s 1996 reelection, but the scenario can at least be imagined.

Moving on to the final two categories, let’s take a look at the six states (and one Congressional district), with a total of 86 electoral votes, which the Party Crasher characterizes as “Leans Democratic.” These include all four of the most closely contested states from 2012: Florida, Ohio, North Carolina and Virginia, most of which are generally considered toss-ups at this point by most forecasters. The Party Crasher characterizes them as leaning blue for the following reasons:

The two other states characterized as “Leans Democratic” in this forecast are two states that many other prognosticators consider toss-ups: Iowa and New Hampshire. But these two states have been pretty solidly, if closely, Democratic for a generation in presidential politics, each going blue in five of the last six elections. They’re clearly Democratic leaners unless the Republican candidate does unusually well, and that doesn’t appear likely to be the case at this point.

Finally, the Party Crasher expects Clinton to pick up one electoral vote in Nebraska, where the state’s electors are split by Congressional district. The 2nd District, centered on Omaha, went to Obama in 2008, and in 2014 elected a Democratic member of Congress. If Clinton prevails by a large margin, she can expect to compete in this district and possibly win it. That’s the bet this forecast is making at this time.

Only two states, with 27 electoral votes, are characterized as “Leans Republican”: Arizona and Georgia. Watch these two states very closely this fall. Arizona, now 30 percent Latino, could evolve into a swing state if the Latino vote materializes as heavily against Trump as some observers expect. Even McCain, in a private fundraiser whose recording ended up getting out, said he could have a difficult race due to the presence of Trump as the GOP standard bearer due to the arousal of Latino voters. As to Georgia, the Peach State continues to see an influx of in-migration from other parts of the country, and in conjunction with the already sizable black population, the migration is changing the state’s political character. Obama lost Georgia by 5 percentage points in 2008 and by about 7 percentage points in 2012, despite not really campaigning there. If the election turns heavily against Trump, Georgia might turn against the GOP as well, though it’s still a stretch.

All in all, the 2016 election at this point looks like something between the 2008 and 2012 elections, but there is plenty of room for movement. Stay tuned. 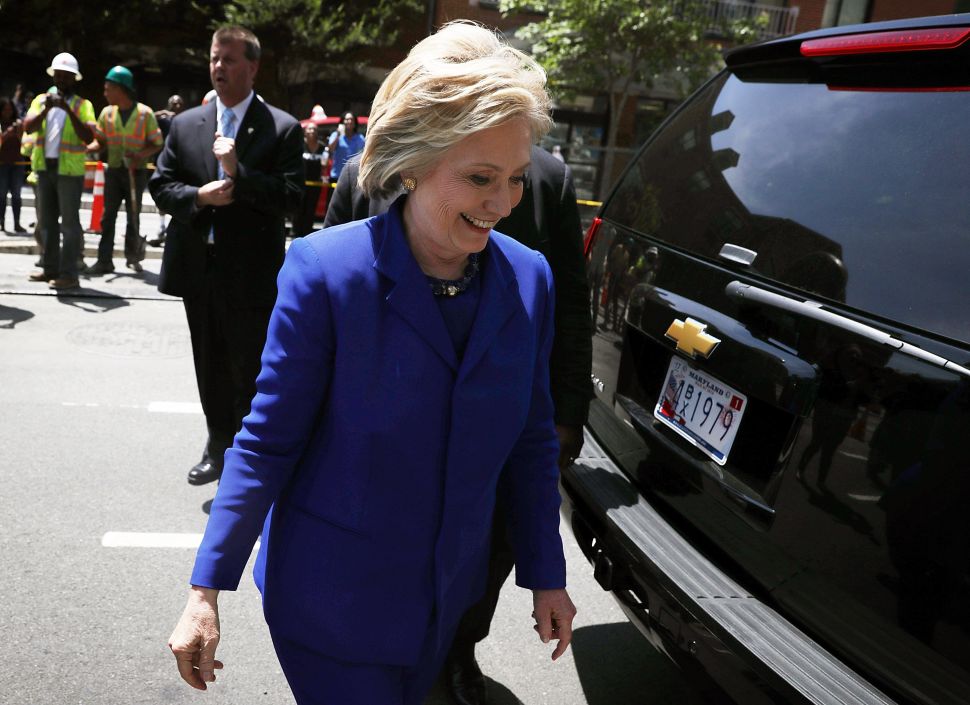