UPDATE: In a small victory for Honesty (in the War On Honesty waged by mainstream media and Big Government), Loretta Lynch buckled and released a full transcript.

The State Department’s Dissent 51 might as well be in Area 51.

Never heard of the Dissent 51? No surprise. The 51 State Department FSOs (Foreign Service Officers) comprising the Dissent 51 are mid-level State Department go-to professional diplomats confronting the day-to-day disaster of the Obama Administration’s Syria policy. As far as the mainstream media are concerned, these brave, workaday American diplomats who’ve risked their careers and are speaking truth to power may as well be residents of Area 51, the secret Nevada UFO base feared by fevered conspiracy theorists. Yes, Area 51 UFSOs: Unidentified Foreign Service Officers!

By the way, 51 FSOs signing a Dissent Channel cable may be unprecedented. I did a little Internet research and couldn’t scare up a published cable with more than one signee. I asked retired diplomats and knowledgeable reporters but no one could recall a single Dissent Channel cable with more than one signee. Oh, might have been one with three signees? But 51?

Except it has. The Dissent 51 cable signals a revolt of the State Department Syrian policy proletariat, en masse, the cognoscenti disdaining the utter failure of Obama Administration Smart Diplomacy. Remember that phrase, from the 2008 campaign? Smart Diplomacy?

To paraphrase the Rolling Stones, the Dissent 51 UFSOs can’t get no 24/7 media satisfaction. They’ll be lucky to get five minutes, despite the 400,000 people killed in the Syrian disaster. That’s a highly plausible death toll. Death toll minimalists put the figure at 200,000 slain. OK, put the goddamn death toll at 200,000. That was a common figure for the slaughter in Bosnia. I happen to think 400,000 dead is a credible figure.

My Area 51 sarcasm targets the comparative media restraint and comparative media minimization of the Dissent 51’s critique of the Obama Administration’s failed Middle Eastern policy—the media’s “move on there’s nothing to see here” attitude is simply hideous. Except there is a such a blatant horror to see: in addition to the 400,000 dead, 12 million Syrians from a population of 23 million have been displaced (see the draft cable below). We witness endless human suffering, continuing chaos, the ominous empowerment of militant Islamist terrorists and the totally stupid empowerment of Russian Neo-Soviet imperialism. These consequences are part and parcel of Obama Administration Barack Obama-Hillary Clinton Syria-Libya-Islamic State-Arab Spring policy disaster.

In the cable the Dissent 51 aim their overt rhetorical ire at the Assad dictatorship.

Astute bloggers have noticed that the cable avoids directly thrashing President Barack Obama for his inept attempts to support anti-regime factions and his failure to back tough rhetoric with action. (Obama’s “red line” for chemical weapons is the most egregious. See this Observer essay for details on that debacle.)

Mid-level State Department professionals expressing their outrage at administration policy are risking their careers, especially in the notoriously vengeful Obama Administration, so the cable does soften some rhetorical punches. However, 51 signees is a heckuva heavy pulled punch. As I read the cable, demanding the President take military action implicitly rebukes Obama’s failure to launch punitive strikes against the Assad regime after the dictatorship used chemical weapons in August 2013—but implicit is not explicit.

The scathing, hard punch approach will win State Department dissent awards if the target is a Republican administration and reinforces the mainstream media preferred narrative. For example, two Dissent Channel cables sent in 2003 by a single (one) FSO won the critic an American Foreign Service Association award in 2004. The FSO criticized the Bush Administration’s policy in Iraq and Afghanistan.

Some toity lefties attribute the “highest form of patriotism” tout to Thomas Jefferson but it’s a misattribution—meaning those who employ it as fact are waging guerrilla war on honesty.

But the poor Dissent 51 diplo-proles are a counter-mainstream media narrative cadre. Why, this is the Era of Smart Diplomacy! Their Dissent Channel cable asks such inconvenient questions!

American diplomats are America’s first line of defense and the Dissent 51 are demonstrating why this bold statement has merit.

Will mainstream media recognize the Dissent 51 as heroes speaking truth to power? Or will the dishonesty of minimized  “nothing to see here” coverage prevail?

Emulating the still unknown State Department official who had an uncomfortable segment of an uncomfortable press conference erased, U.S. Attorney General Loretta Lynch has promised to erase the historical record. Effective June 20, the FBI will erase terrorist Omar Mateen’s declarations of loyalty to the Islamic State from transcripts of the 911 emergency phone calls he made while committing mass homicide in an Orlando, Florida night club.

Lynch is going to alter the historical record and erase key evidence that Mateen committed treason when he attacked and murdered innocent Americans. But that isn’t her spin. Get this, she’s avoiding “re-victimizing” by creating “limiting” transcripts.

Here’s the quote from her interview with CNN’s Dana Bash:

“The reason why we’re going to limit these transcripts is to avoid re-victimizing those who went through this horror. But it will contain the substance of his conversations. And there were three conversations between this killer and negotiators.”

WAR ON HONESTY IN REVIEW:

From War On Honesty 1: Secretary of State John Kerry, who initially said the erasure of  nettlesome questions regarding the Iran nuclear weapons negotiations from the videotape of a State Department press conference was “stupid and clumsy and inappropriate,” has now vowed (to America and the world) that he will determine “exactly what happened.”

He made this war on dishonesty vow on June 3.

Of course, when Kerry claimed in 1971 he threw away his military medals (or perhaps his ribbons, for he later hedged) in disgust at U.S. Vietnam War policy he was only funnin’.

Or posturing for the media, during the Era of Vietnam Syndrome Military Hate.

Hey John, why’d you fake throwing away your military medals?

You wanted both throw and no-throw in 1971 and, if the helter skelter internet record is to be believed, still crave both.  Alas, even Slate (of all places!) concluded you’re guilty of a “nuanced moral code.”

Oooo. That’s like no moral code at all, but Slate lacks the guts to say it. But, you’re a nuanced guy, right?

Comprendo. You wanted media drama, televiso sensationalism to call attention to yourself, and throwing frickin’ military ribbons (if we accept your claim to have tossed ribbons, in lieu of medals, a nuance, a brilliant nuance!) in disgust at the height of Vietnam Syndrome Military Hate was… was frickin’ sensational, frickin’ nuanced, right? Mainstream media bought the ribbons/medal toss whole sale and whole nuance (the toss, and disgust, that was the sensation, so theatrical) and your anti-war peacenik base applauded and provided votes. Total political pay-off for ya, right?

But. But… but the medals. And even the ribbons associated with the medals, for the chest salad represents the medals, don’t they, John? Even the ribbons mean something—don’t they, John?… So you didn’t really throw ’em, not really, I mean—you really didn’t throw the real medals. You faked real toss and tossed faux, either faux medals or ribbons in lieu. (French nuance here, John, but a nuanced guy like you will follow this, right?) You procured the televiso drama, the media coverage and you still kept the medals, right? We down on that, you and me?… What do your medals mean to you, John? They must have value to you beyond political chits—that’s my guess. I mean, my medals mean something to me. I feel like I had the privilege of defending America, John. Am I right about you on this count or am I giving you too much credit? Clearly, those medals have, or had, political value and media value. Do they mean something more than that to you, John?… They damn well should, you nuanced moral code, you…

John. Lean close. Get this State Department truth erasure crime against history solved and fixed, pronto. To hell with your damned nuanced moral code. Peg who did the dirty deed and penalize the perp who waged War On Honesty. You may be SecState but if you don’t name and punish the individual who tried to deceive America you’re still the same fraud jerk who—at best—exaggerated his willingness to throw away his military awards. But didn’t.

Austin Bay is a contributing editor at StrategyPage.com and adjunct professor at the University of Texas in Austin. His most recent book is a biography of Kemal Ataturk (Macmillan 2011). Bay is a retired US Army Reserve colonel and Iraq veteran. He has a PhD in Comparative Literature from Columbia University. 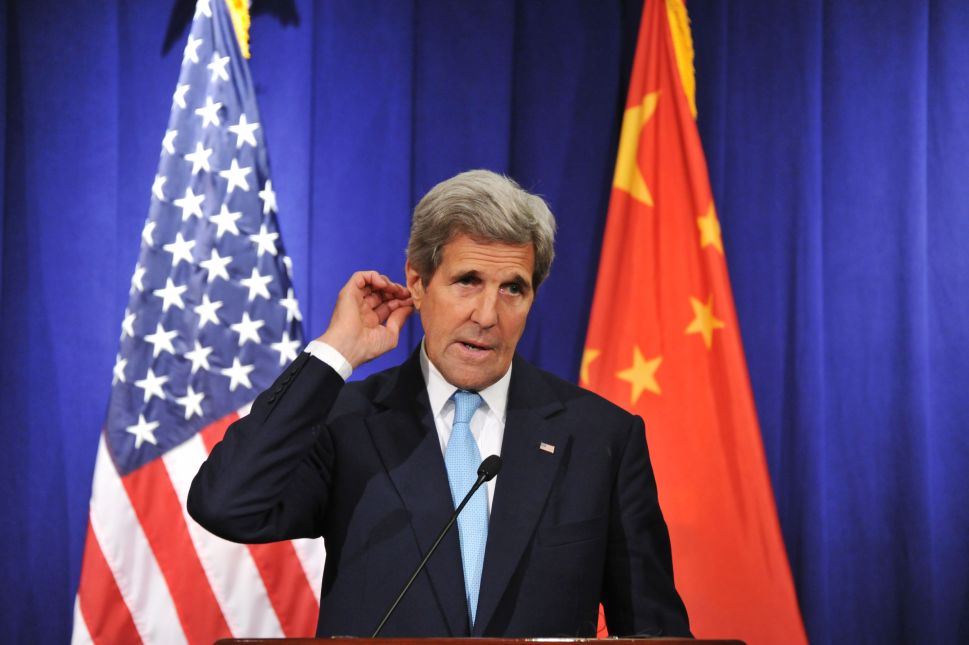