Two Rodeo Drive, with its charming European style boulevard and bustling cafes, is a shopping addict’s fantasy with an absurd selection of luxury stores like Versace, Tiffany & Co. and Jimmy Choo. And this summer, it will also have a Salvador Dali show. Hey, why the hell not?

Bill Wiley, director of Two Rodeo Drive, decided that Beverly Hills wasn’t surreal enough, so he rented a full “turnkey” show of sculptures by the mustachioed Spaniard for his shopping center. The show comes complete with Dali’s trademark melting clocks and women with dresser drawers coming out of them. Aside from the usual stoner college kids and Kanye West, this show is likely to attract thousands of tourists, as Dali is one of the more universally beloved artists of the 20th century.

In case you live under an Antarctic glacier, Salvador Dali was the flamboyant painter who, as part of a second wave of European Surrealists, popularized the movement with his classically-influenced painting style. His 1939 painting The Persistence of Memory is one of the most famous of the modern era. Less known are his sculptures, which, like his paintings, illusionistically fuse disparate animals (elephants with spider legs) and give objects alternative properties (the aforementioned melting clocks).

The plainly titled “Dali Exhibit at Two Rodeo Drive,” is owned by Beniamino Levi, president of the nonprofit cultural organization The Stratton Institute, and was orchestrated by Michael Schwartz, the owner of Galerie Michael in Beverly Hills. Both Levi and Schwartz were friends of the artist late in his life, and Levi actually commissioned this group of bronzes directly from the Spanish master. That’s right: Dali really made this stuff.

Over the years, Levi has rented his exhibition to over 100 exotic locales around the world like Shanghai and Sydney. But now, for the first time, it’s the United States’ turn, and when a museum wouldn’t step up, something more American did: a mall. “The Dali Universe” will be on view at Two Rodeo Drive in Beverly Hills through September 23. 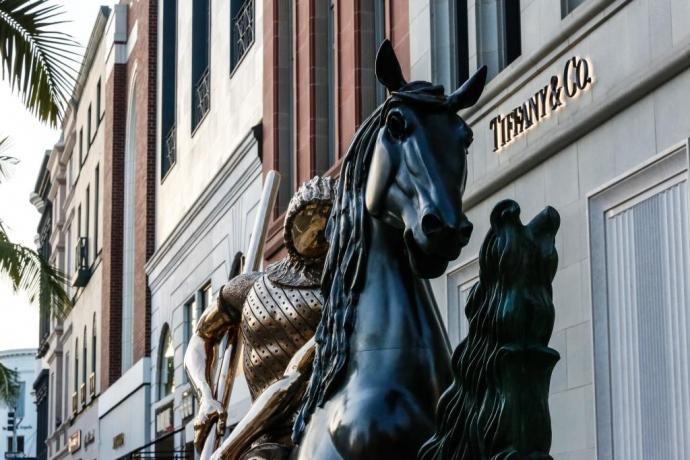