Indie-rockers seldom speak about themselves in hyperbole the way that rappers and pop stars do; florid descriptions of their style and maps of their sonic reference points are often the work of publicists. This tradition allows bands to simply exist, purely and without the need for self-identification, protecting their artistic process. That said, San Fransisco’s Deerhoof, an absurdist, experimental pop band that blurs the lines of punk and noise-pop, of jazz and garage, have demonstrated a serious self-awareness in naming their 13th LP The Magic.

Twenty years strong into the band’s consistently varied discography, Deerhoof continue to thrill us with their ability to simultaneously sound whimsical and pummeling. And what they’re conjuring here is not only captivating, but real.

The band recorded The Magic in seven days at an abandoned Albuquerque, N.M., office plaza. Criminally underrated drummer Greg Saunier’s description of the process illuminates what’s different about this album, which he says sought to capture “what we liked when we were kids—when music was magic—before you knew about the industry and before there were rules. Sometimes hair metal is the right choice.”

The trademark Deerhoof sounds are all here—Saunier’s hyperactive, in-the-pocket drumming still sounds inhumanly powerful, reminding any noobs how essential he is to the band’s jazzy, jittery changes. Frontwoman and bassist Satomi Matsuzaki still draws inimitable power from her monosyllabic cooing, contrasting the music’s heavier moments with simple but profound absurdist musings that soften the impact of the band’s noisier indulgences.

Much in the way that A Moon Shaped Pool is the boldest Radiohead album in years simply for bearing the vulnerabilities of its frontman, The Magic is essential listening that contains clues into the styles and moods that shaped Deerhoof’s current incarnation.

Rodriguez’s “That Ain’t No Life For Me” makes this clear from the outset, its crusty power-chord riffs channeling the gutter punk ambivalence of The Germs. “You were born to be my grave,” he snarls, “I’ve seen how the other half lives and that ain’t no life for me.” This window into Rodriguez’s influences illuminates the band’s history, too, recalling when he joined the group in early 2008, ushering Deerhoof from 2007’s poppier Friend Opportunity into the guitar-heavy Offend Maggie.

“Life is Suffering” introduces a new level of groove into Deerhoof’s oeuvre, something they’ve dabbled with before but explore here with all the paisley intentions of creating communal reverie. It’s just one of the points where The Magic‘s low-fi production gives the music a sound that’s not only vintage, but lived in—its main riff channels a groove straight out of the ’60s, as Matsuzaki contemplates enlightenment—”learning, searching in the light, all is right,” she learns, before shortly coming to the conclusion that “life is suffering, man.”

Side A centerpiece “Criminals of the Dream” begins with the lushest synths since Green Cosmos before sounding like a punk band covering Moby Grape, demonstrating Deerhoof’s ability to write longer songs when they want to. It also reminds us that the groove they’ve found on the album transcends genre limitations, and that’s how they can get away with making a record simultaneously cohesive and all-over-the-place.

The straight dirty funk of “Model Behavior” only offers more proof that Deerhoof have honed their trademark angular jittery noodlings into songs that occupy the space of less “out there” genres to great success.

What’s Deerhoof going for with such acts of sonic subversion?

“Plastic Thrills” offers us a bit of a wink and a nod toward an answer, bringing bouts of power-pop and glam they explored on previous track “Dispossessor” to a head. With its guitar riff channeling classic Stones or Mick Ronson circa Alladin Sane, you can almost picture some finance bros heading down Sunset blasting this out of a convertible—but there’s still something dangerous and weird about it. We’re used to hearing songs this bold and cocksure with much more sheen and production, but Deerhoof have the chops to do it themselves, isolated from the comfortable hand of industry. That’s true power.

The Magic is a reminder that when the members of a band have an honest, real connection with each other, such genre descriptions are ultimately immaterial.

On their current tour, Deerhoof are playing Def Leppard’s hair-metal staple “Pour Some Sugar On Me.” Liberating it from the leather-clad machismo of those cocksure Englishmen, Matsuzaki’s simple, innocent-sounding delivery of the lyrics fits in perfectly with the bands knack for making the heavy sound not only palpable, but wide-eyed. Both the power and the restraint of Deerhoof are on full display in such moments, and The Magic is full of them.

What a gift they’ve given us for this window into the powers of influence. It’s a reminder that the best bands have no sonic recipe, only a chemistry ensuring that if they make it together, whatever they come up with next will sound delicious. 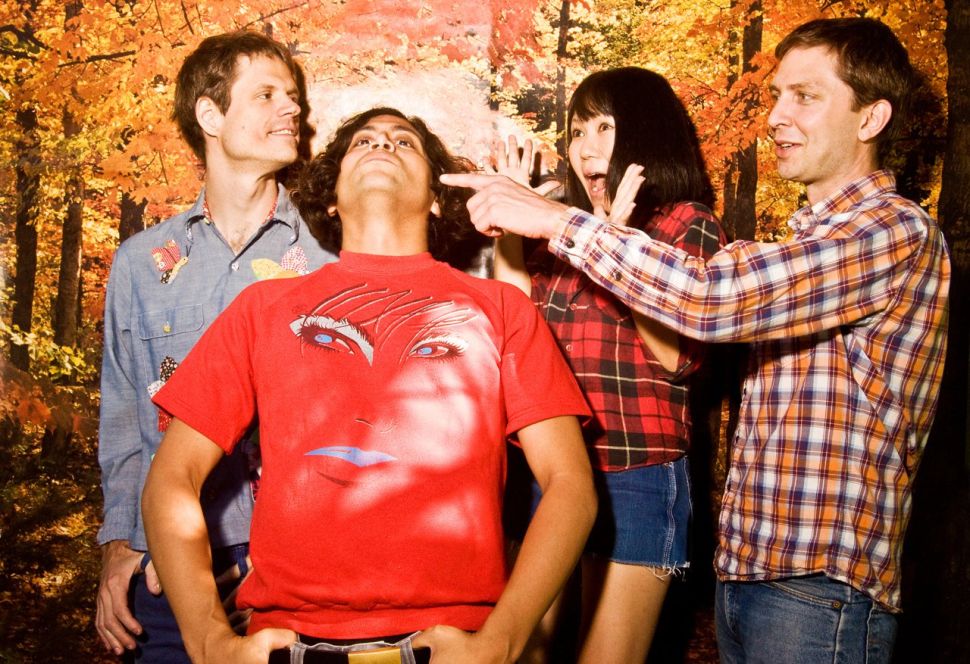