Perhaps Demi Moore should head a few floors down and ask her neighbor in the exclusive San Remo for some tips on how to unload her massive penthouse in the co-op.

A month after David Solomon, a co-head of investment banking at Goldman Sachs, put his four-bedroom, 5.5-bath spread at 145 Central Park West on the market, the fourth-floor spread has found a buyer.

The apartment was listed for $24 million with Brown Harris Stevens brokers Lisa Lippman and Scott Moore, and it appears to have gone into contract at that price—at least, it seems unlikely that Solomon would agree to much of a discount after such a brief spin on the market. Moore, on the other hand, was reportedly shopping around her triplex penthouse for some time before she put the palatial fifteen-room apartment on the market for a staggering $75 million in April 2015—and it looks like it’s still sitting there.

Solomon and his wife, Mary, have resided in the San Remo since at least 2002, and per the listing, they have “completely renovated and restored” the 12-room space.

Other than a famous upstairs neighbor (at least for now—though she reportedly hardly spent any time there), the apartment has some other lovely features including nearly 65 feet of Central Park frontage, a formal dining room, library, an en-suite bath in each of the bedrooms, and a windowed chef’s eat-in kitchen. For the vino-inclined, there’s 1,000-bottle climate-controlled wine storage and a wet bar.

The Solomons are “empty nesters [and] looking for something smaller,” Lippman previously told The Real Deal when the unit was listed.

The co-op has ten-foot ceilings, herringbone and strip hardwood floors, as well as 9-foot mahogany doors, custom bookshelves and paneling in the library and den, and restored moldings throughout. The master suite has two dressing rooms, and the master bath has a double vanity and a separate tub and shower.

And even though with summer just beginning it might be just a tad early to start thinking about the fall holidays, the new owners must be rather excited about the Thanksgiving Day Parade–after all, the listing promises that the apartment, which has French doors leading out to a balcony, provides “an ideal vantage point” for the November festivities. 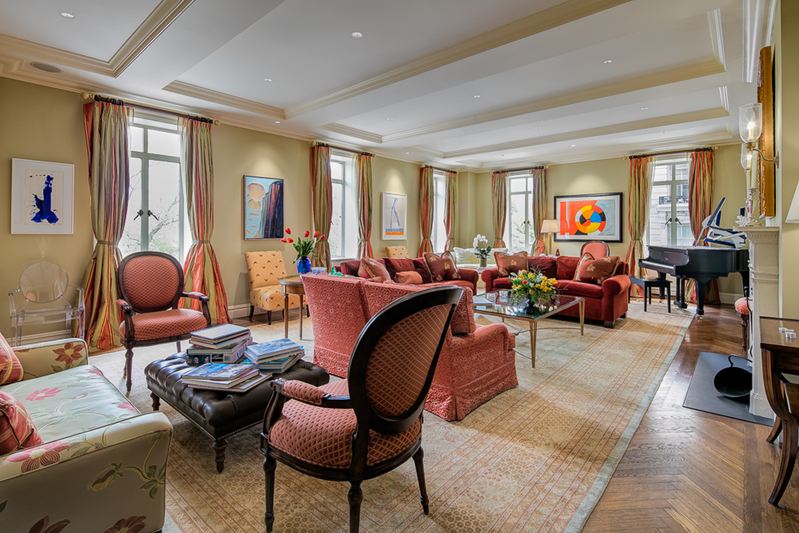