NEWARK – As the battle rages on in Trenton over the Transportation Trust Fund, Senate President Steve Sweeney has been heavily campaigning this week in northern New Jersey for his plan to grant all school districts in New Jersey 100 percent funding. Sweeney’s plan—which he is working on closely with state Senator Teresa Ruiz—is a reaction to a plan put forth by Governor Chris Christie to grant all of New Jersey’s school’s a $6,599 per student flat rate of state aid regardless of income-based need or higher proportions of students requiring special services.

With the volatility of the TTF, Sweeney’s charge into the northern part of the state underscores the senate president’s recent distancing from the governor. This week, Sweeney has made appearances in both Paterson and Newark to discuss how Christie’s flat rate funding plan is “unconstitutional.” Those appearances have come at the cost of discussions in Trenton about the future of the TTF with fellow legislators. With the clock ticking on time to come to an agreement on the TTF, Sweeney’s steady focus on schools has opened the door for speculation about whether or not Sweeney will post the Prieto/Christie compromise for senate vote during Thursday’s session.

Regardless of his eventual actions on the TTF, Sweeney’s school discussions have been heavily critical of the governor. Sweeney has stated that Christie’s flat rate funding plan is “unconstitutional.” According to Sweeney, the best way to fix New Jersey’s school funding problem is to work with the already-approved 2008 formula, but to move forward with it without the changes that have left New Jersey’s educational funding method in shambles.

“There is a good reason for everyone to be skeptical of this,” Sweeney said at a Wednesday appearance in Newark. “I will be honest with you, the legislature did this. We created a formula that passed every area. Everything was how it was supposed to be. But, because we went into the legislative process—we are legislators and we protect our districts and you can’t fault the legislators for wanting to protect our districts—we just created these inequities. They have gotten greater.”

Sweeney wants to form a commission to study the changes made by the legislature to Governor Jon Corzine’s 2008 formula that was deemed constitutional. Then he wants to remove those alterations and post the bill to the legislature without the option to make amendments. That move should, theoretically, fix school funding woes for many districts and redistribute funds between New Jersey’s over and under-funded schools, according to Sweeney.

On Wednesday, Sweeney appeared alongside legislators like Ruiz, Newark Mayor Ras Baraka, state Senator Ron Rice, Assemblywoman Eliana Pintor Marin, Assemblyman Ralph Caputo and members of the Newark City council for a roundtable discussion on what issues need to be addressed for the new school funding plan. The previous day, Sweeney held a similar forum in Paterson with Mayor Joey Torres, state Senator Nellie Pou, Passaic County freeholders and other officials to hear similar concerns. The senate president said he plans to make stops like these all around the state in the coming weeks.

According to Ben Dworkin, the Director of the Rider University Rebovich Institute for Politics, Sweeney’s moves are primarily a reaction to Christie’s fairness formula. However, Dworkin said the gubernatorial hopeful also may be looking at school funding through the lens of a 2017 gubernatorial campaign.

“Part of it is a reaction to the governor pushing his proposal. The Sweeney plan allows him to draw a sharp contrast with the governor on an issue a lot of people care about,” Dworkin said. “He is looking for those opportunities. Sweeney’s critics constantly bring up his close working relationship with the governor as a negative point in a Democratic primary.”

Dworkin continued: “Everything is political, it is New Jersey politics. But, with that being said, the governor’s proposal creates a very dramatic situation for urban school districts so, on a strict policy promotion effort, it makes sense that [urban communities] would be where you would go to talk about it. The fact that there are any number of people who would like the votes from these communities in the 2017 Democratic primary also comes into play because everything comes into play.”

According to Dworkin, Sweeney is not the only gubernatorial hopeful likely to face increased scrutiny leading up to the Democratic primary.

In Newark on Wednesday, Sweeney was seated beside Newark Mayor Ras Baraka, a former educator and champion of traditional public schools. Baraka has close ties to Fulop and it expected to rally for him in the 2017 gubernatorial contest. However, according to Baraka, efforts to fix school funding issues should not be politicized.

“At the end of the day I think that these things transcend who the governor is,” Baraka told PolitickerNJ. “This discussion is about how we fund education. The not funding of Abbott was done under Democrats. Local control, the Democrats took our school systems and they didn’t give them back either. There have been Democratic governors who still didn’t give us our schools back. This issue transcends all of that for us in Newark. Democrat of Republican, they both did it to us.”

According to Baraka, steps like the return of school control to districts like Newark is critical for the future of New Jersey’s students.

David Sciarra, Executive Director of the Education Law Council, said that fully funding urban schools is critical so that all New Jersey children have equal opportunity. Sciarra said that Sweeney’s plan is a “welcome” alternative to Christie’s formula.

“Decades of research have shown that low-income students, especially those residing in neighborhoods of concentrated poverty, require additional resources to provide them with the opportunity to meet state academic standards and to be productive and engaged citizens,” Sciarra said. “It is glaringly obvious that Governor Christie’s plan not only violates common sense, but also NJ’s constitution. Senate President Sweeney’s plan to phase-in full funding for all school districts under the school funding formula is welcome, especially given the shortfalls caused by Governor Christie’s aid cuts over the last seven years.”

According to Sweeney, he will not allow Christie to further his funding push.

“What we are talking about is fairness, period,” Sweeney said. 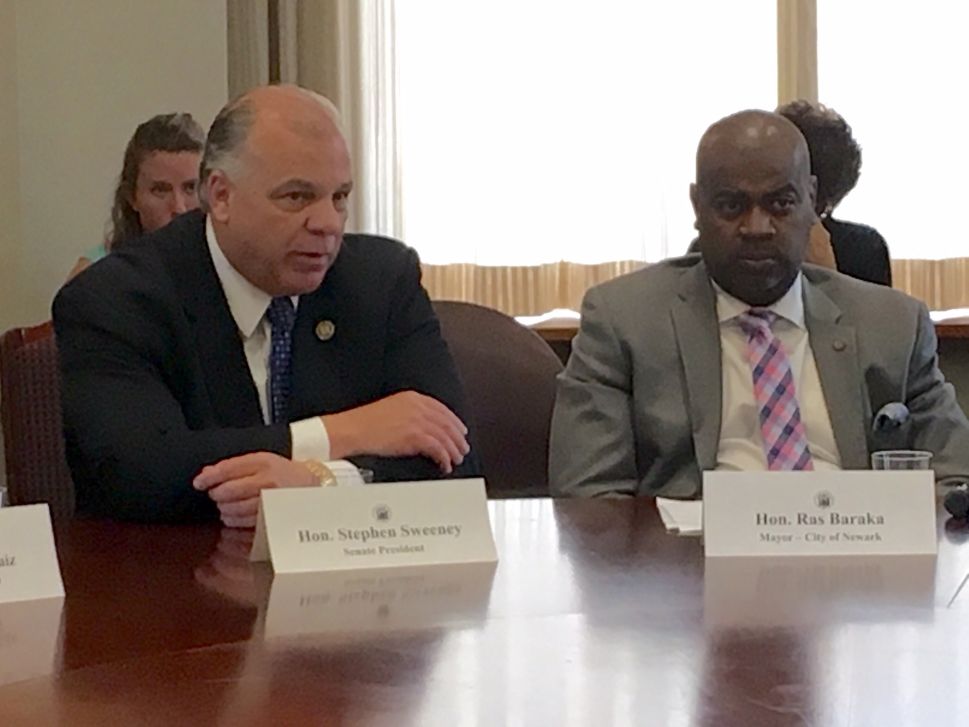