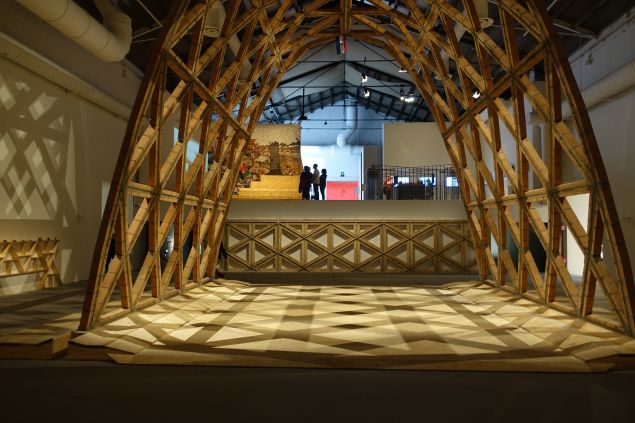 The future is now—at least at the Venice Architecture Biennial.

The elaborate exhibition, which alternates year by year with the Venice Art Biennial, offers projects by more than 100 countries. In art, the focus is on everything contemporary, but in architecture, the biennial is about the future.

The central exhibition of this year’s biennial is called Reporting from the Front. The title refers, among many things, to the place where architecture meets desperate necessity—certainly not the surging market of London, New York or San Francisco.

Inside the Arsenale, a 15th century Venetian fort, you walk through recycled landscapes, first a chamber with walls made of materials salvaged from the biennial of two years ago, then into a gallery with hundreds of metal bars, also salvaged, hanging from the ceiling. Soon you’re in wide  rooms devoted to “ephemeral urbanism,” the new term for accidental cities formed by flight, famine, floods, wars and religious pilgrimages.

This Biennial in the Arsenale, the Giardini (city gardens) and all around Venice isn’t about that kind of architecture —skyscrapers, luxury dwellings, grand infrastructure projects, or even materials like steel and stone. That said, Rolex is a sponsor. The 2016 Biennial is more about what architecture could be than what it is—“quality of life” is the broad term used by this year’s commissioner (chief curator), the Chilean architect Alejandro Aravena, the subject of a glowing New York Times profile two weeks ago. “The notion of quality of life ranges from very basic physical needs to the most intangible dimensions of the human condition,” he wrote in the Biennial guide. Aptly broad for an event where so many have so much to show and tell—and maybe even to build.

Following Aravena’s call, the biennial’s tactile side ranges from buildings for refugees to the toll of gold mining to garbage as a structural material. A core theme is architecture without architects, involving mud, bricks, bamboo and untrained labor.

Yet the stars of architecture are also present. The office of the late Zaha Hadid organized a memorial retrospective in the 16thcentury Palazzo Franchetti. In less august surroundings, Lord Norman Foster (London City Hall) showed his droneport designs for planes delivering supplies and building materials to remote parts of Africa.

David Chipperfield, now reimagining the Metropolitan Museum southwest wing, showed his museum in Sudan for preserving and exhibiting the ruins of ancient Naga. “This is how dialogue with history should be conducted: without fear and without arrogance,” the Biennial guide declared.

Project after project had the tone of a manifesto, and the book Ephemeral Urbanism about “accidental cities,” for sale at the site, sold out after the day the Biennial opened. Yet after the first few preview days, the masses weren’t rallying. Once the biennial opened to the public, the Arsenale and Giardini felt empty, as if someone dropped the neutron bomb, the atomic weapon that kills people but leaves the built environment standing. Emptiness made the biennial a place of meditation on the future of architecture.

And the more immediate crisis of refugees streaming into Europe haunted those vacant spaces. Finland’s pavilion had a friendly future vision of a Helsinki Kasbah. The German Pavilion was covered inside with photos of migrants settling into German cities. Bill-boards on the walls bore such un-German statements as “TOLERATING SEMI-LEGAL PRACTICES CAN MAKE SENSE.”

Detroit, where semi-legal practices have been the norm for decades—its former mayor is in prison—was the subject of the pavilion of the United States. In the biennial’s broader context, Detroit’s tangle of urban crises looked manageable compared to the accidental urbanism of refugee camps in Haiti, or a pilgrimage site in India with no infrastructure where a million people gather.

At the U.S. pavilion, twelve projects reimagined four Detroit sites. One called for repopulating the city with 68,000 refugees, a tenth of the current population, which might be received better in Venice than at home. Another reclaimed the half-mile-long Packard Automotive Plant, designed by Albert Kahn and opened in 1903 (still structurally sound), where Greg Lynn of UCLA defied the biennial’s low-tech approach and its anti-corporate bent. Lynn took off the building’s top floor and, with Microsoft’s HoloLens technology, rechristened the abandoned factory as The Center for Fulfillment, Knowledge and Innovation. This potential outpost of hope also has ports for drones produced by a company that Lynn founded. 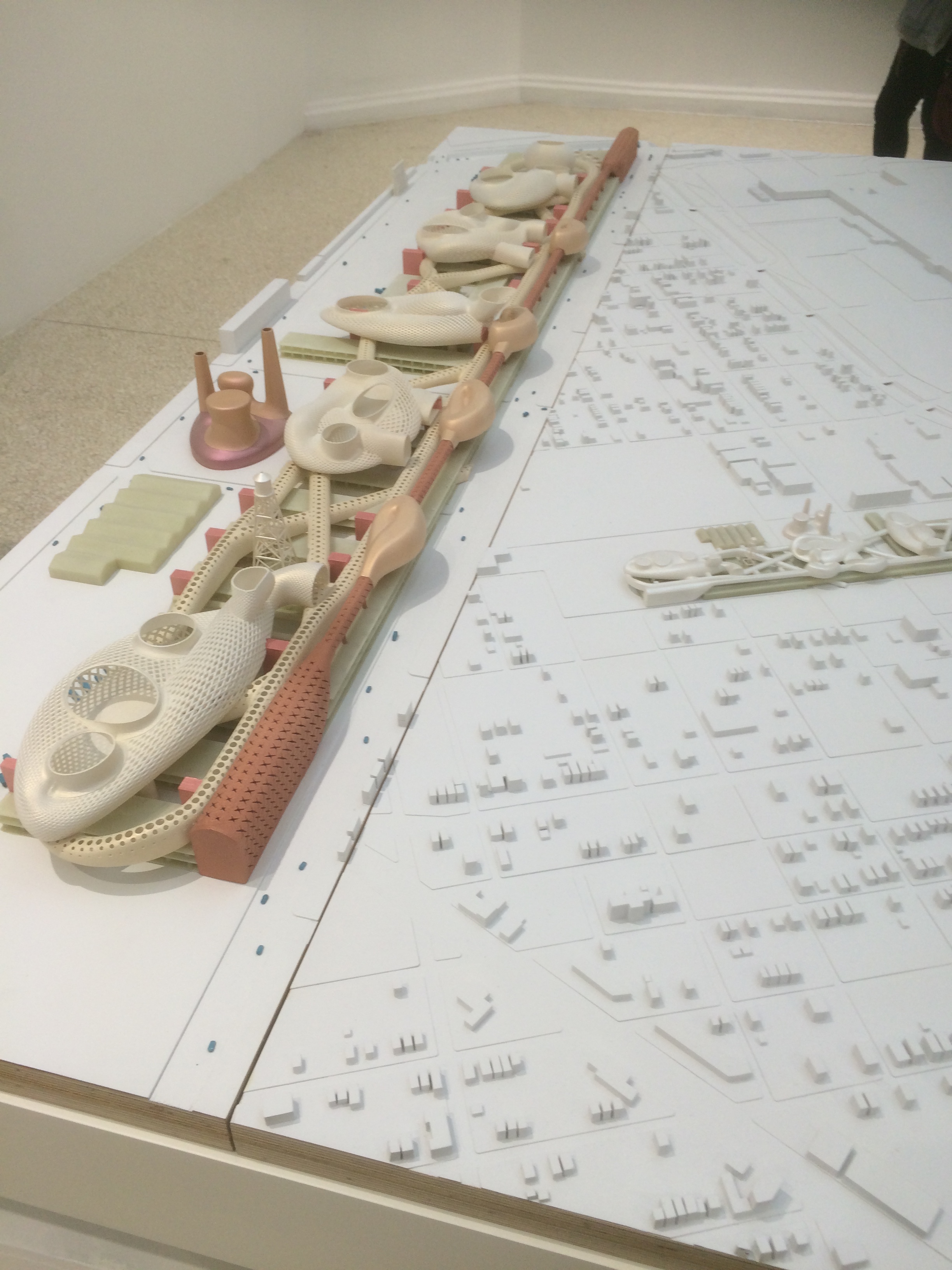 At a Detroit lakeside site where a post office now stands, Scott Preston Cohen of Harvard put an art center alongside a parking lot under the spreading wings of a roof. When (or if) Detroit recovered, the parking lot could be repurposed for the arts.  “I always think that is the attractor. It is in New York,” he said, “If you look at the way Long Island City is developing, that might be the paradigm for Detroit.”

Mack Scogin, also of Harvard, took as his subject the Mexicantown neighborhood, a rare Detroit district that’s not in crisis. He concluded that the last thing this viable place needed was an architect attracting new investors who would make it unaffordable. Scogin and his partner. Merrill Emal, exhibited their homage to Mexicantown, a shard of crumbled metal atop wide sheets of plexi-glass.

You can debate whether anyone needs to travel to Venice to get perspective on Detroit’s architectural future. Yet at the Canadian Pavilion, a short walk away in the Giardini, architects put their country’s entire history in the crosshairs. They installed a sort of salon des refuses in front of the country’s official pavilion, which is officially closed for renovation.

Once again, the biennial was back to raw materials. In the ground was a white disk, about ten feet across, with a gold claim stake at its center. A fur blanket covering the project, called Extraction, was lifted off at the unveiling. As the Canadian ambassador to Italy listened, Pierre Belanger, a landscape architect who directs the Masters in Design program at Harvard, linked the history of mining in Canada to the history of empire. Canada’s empire is expanding he said, as its mining firms operate around the world. 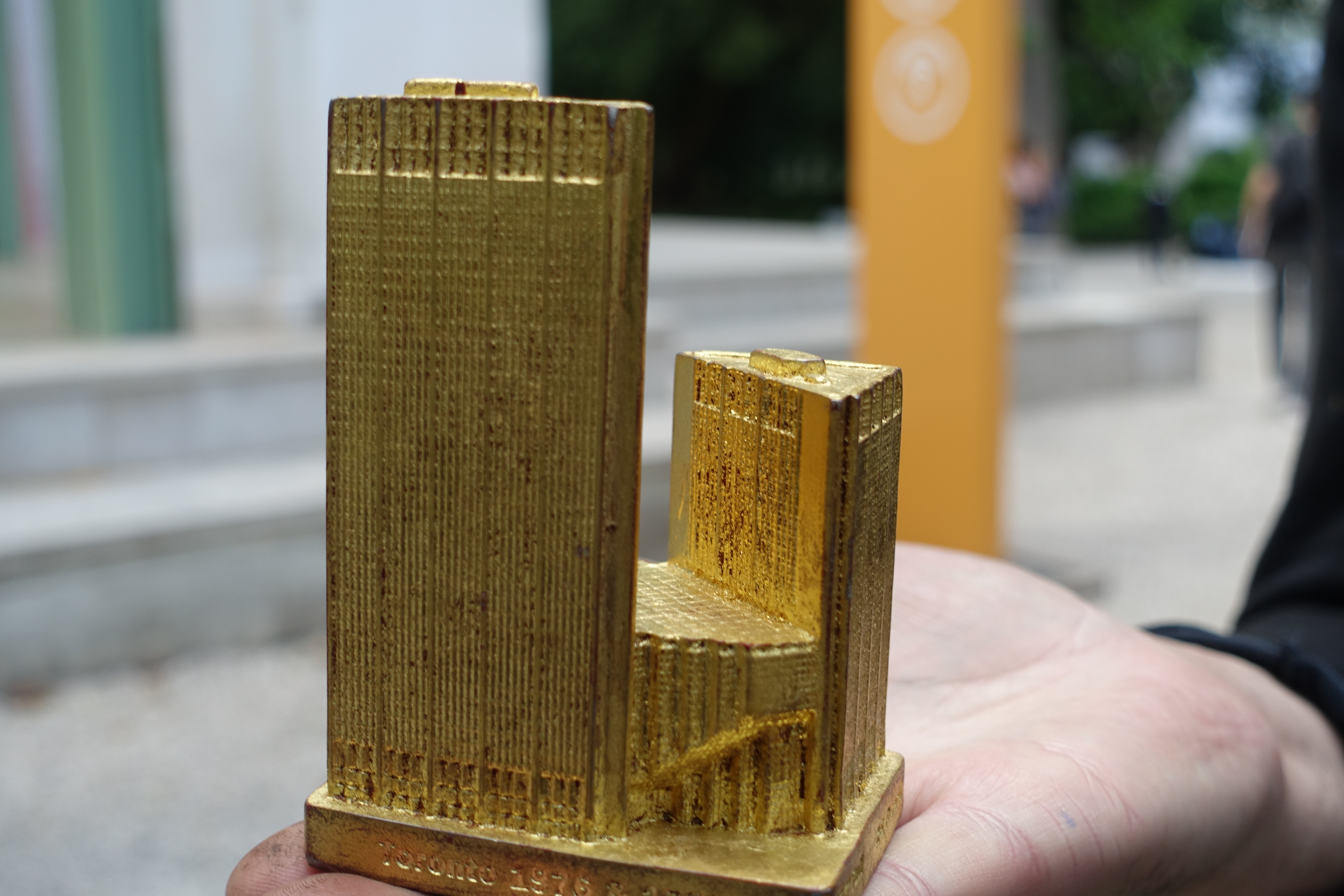 “We’re not looking to monumentalize anything,” said Belanger, “It’s an intervention. It’s not an exhibition, it’s not an installation.”

“Given the fact that it’s a survey stake, which is often called a monument, it’s a counter-monument,” he said.

As an activist from Canada’s Athabascan Chippewa First Nation spoke, the Canadian ambassador knelt on the disk and placed his head on the stake. He was followed in that act by Phyllis Lambert, nee Bronfman, Canada’s most important architectural philanthropist, who was crucial to the construction of the Seagram building on Park Avenue in New York.

“I’m in the business of institutional subversion,” said Belanger, “the commonwealth people love it. We’ve only had complaints from Canadians.”

If the Canadian Pavilion’s intervention was literally on the ground, the Antarctica Pavilion was in frozen dreams. On the Grand Canal, in the Palazzo Marcello, were the Russian artist Alexander Ponomarev and the Egyptian-Canadian architect Hani Rashid, of the firm Asymptote in Long Island City.

On view were dreamy holographic renderings of projects by Rashid’s students, who drank Prosecco at the pavilion’s opening as if they had just returned from the wilderness. One rendering that resembled brain tissue was a colossal station for the world’s internet servers, to be cooled in the ice of the third-largest continent. Another was a repository for edible insect protein, powered by insect waste.

Implausible? It was implausible twenty years ago that Antarctica would ever melt. “Without us, we have a world designed by scientists,” Rashid warned, stressing that his visions were buildable. “Developers have a way of finding a niche in utopia,” he said.

Sometimes, although not often, exhibitors worked with satire. The Russian Pavilion celebrated the V.D.N.H. (Exhibition of the Achievements of the National Economy) in Moscow, a 1939 Soviet ensemble of monuments that fell into ruin after the breakup of the U.S.S.R. Statues of giant farm girls with harvested flowers and young men restraining bulls came from now-disgraced visions of a Stalinist Olympia—Soviet kitsch that a Jeff Koons from that world might seize upon. Yet the kitsch-fest in the name of preservation seemed to have some real heart inside, even with kaleidoscopic video tributes in the style of Busby Berkeley that played on the ceilings. 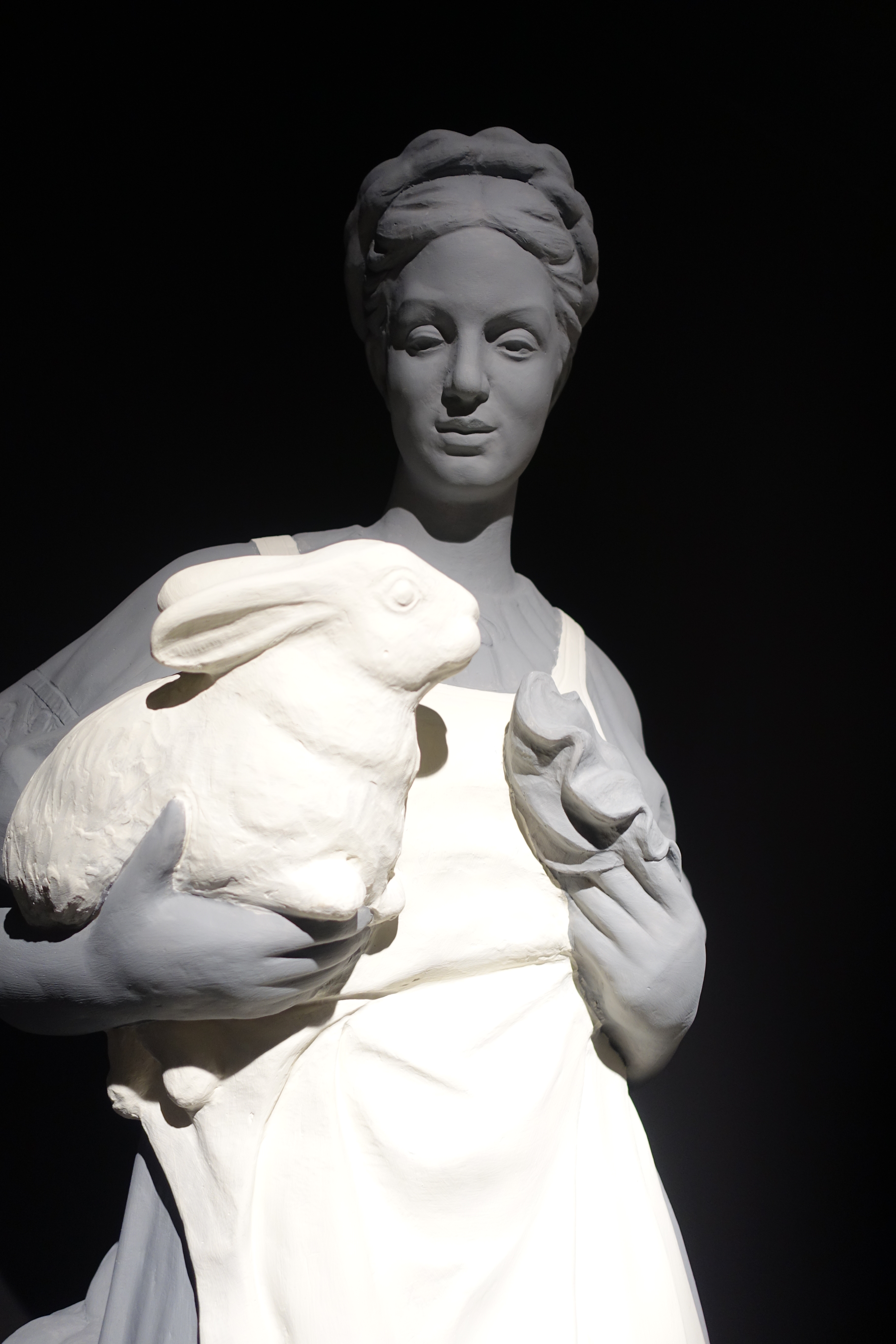 And there was still space at the Biennial for sheer beauty, a much-maligned quality, according to the Portuguese architect Aires Mateus, “perhaps because we have abused beauty as a synonym of spectacle.”

In a tiny room in the exhibition hall at the Giardini, Mateus incised and illuminated volumes from his work into white walls. Calling his project “The Power of Old-Fashioned Beauty as a Way To Resist Banality,” it seemed like revenge on his own profession. Revenge has rarely looked so sublime.

In a far corner at the Baltic Pavilion (Estonia, Latvia, Lithuania), a gym where Venetian schoolgirls practiced gymnastics behind temporary seats, was a remarkable rendering of a building—a can-you-top-this dare in the city where Canaletto painted landmarks. Raul Kalvo of Estonia assembled a view of a railroad station in Tallinn, now under construction, composed of tiny squares taken from photographic fragments. Up close, the photo-reconstruction was an inscrutable chaos—no surprise for anyone who’s worked on a building. Once you stepped ten feet away, an imposing industrial structure took shape, an architectural version of a portrait by Chuck Close. Kalvo called his depiction of a design-in-progress Between Monumentality and Fragmentation.

It’s a title that says a lot about architecture. A theme for a future biennial? 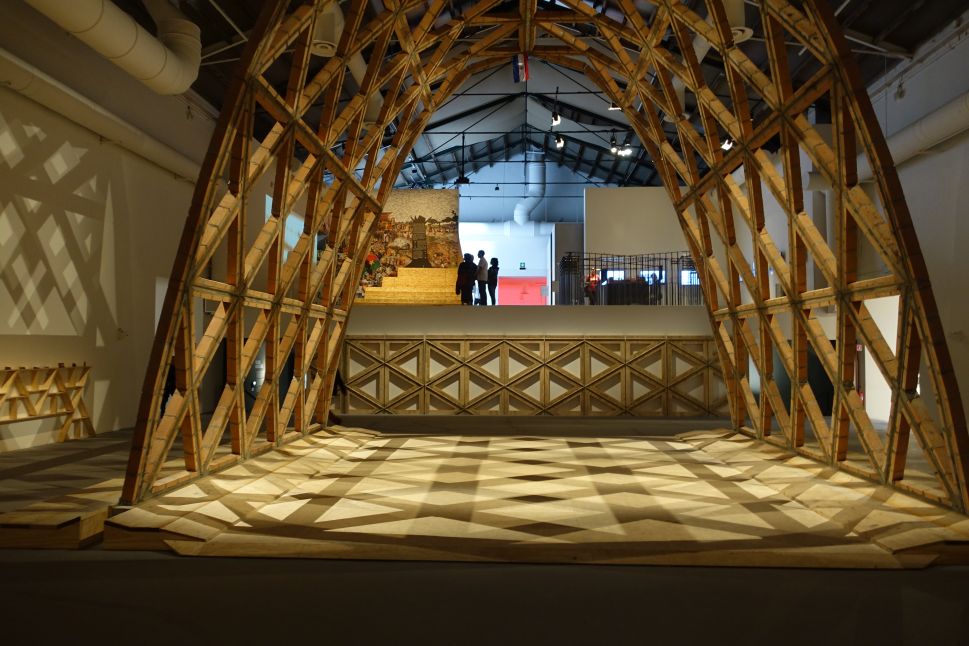