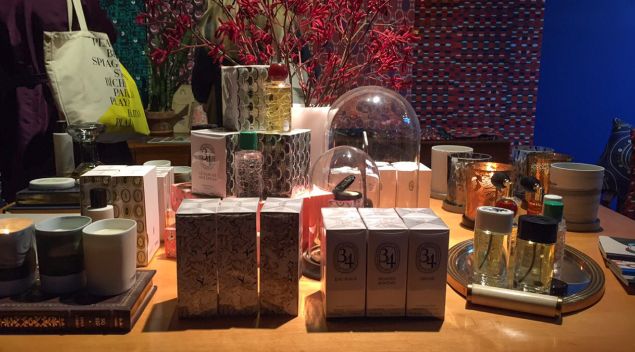 The subtle, intoxicating aroma of diptyque‘s Parisienne candles fill the large, rustic space of their 34 Bazar pop-up event at Brooklyn’s creative art space, The Invisible Dog. The Thursday night affair was to debut diptyque’s new 34 Collection that will be available in September. The event combined the artistic nature of the Boerum Hill space and the brand’s French heritage, walking guests through a maze-like journey through memories of travel, with an eclectic mix of stationary, keepsakes, fragrances and art.

Beginning with a Moroccan-esque pillowed sitting room and weaving into a scene from the brand’s textile origins, the space opens into a large candle-lit lounge filled with artists, hipsters and fashionistas sipping on Sancerre amidst the kale frittatas and crab cakes circulating the room. While wandering around the room, small inlets introduced guests to the brand’s new collection through various immersive artistic experiences. The first was a large coloring wall that allows guests to contribute to a living collective textile with markers in hand. 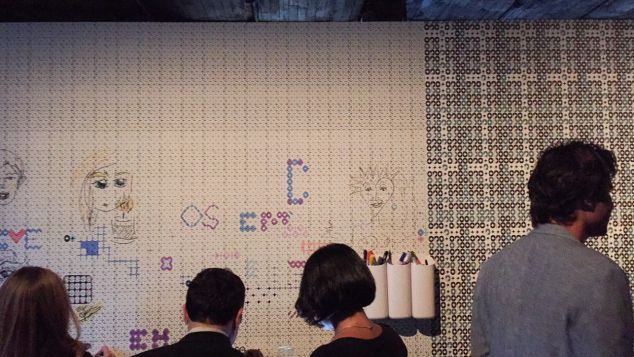 The brand’s choice of a Brooklyn venue was inspired by the artistic community that The Invisible Dog has created, housing artist studios and spacious gallery space. “The first time I came here, it felt almost like home because the soul and the spirit of this place is very special,” said diptyque’s global creative director Myriam Badault.

Diptyque’s candles have gained a cult following amongst New York’s elite. The brand’s cryptically lettered jars have become a status symbol within interior decor and are a fixture in the homes of “It” girls. While designing for Gucci, Tom Ford traveled with the brand’s Figuire candle, placing them in his stores and offices around the world. At $75 a pop, diptyque’s candles have helped to create an elite niche of luxury candle shoppers alongside brands Le Labo and Jo Malone. 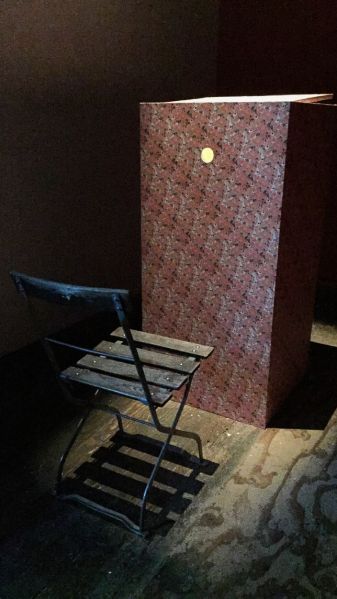 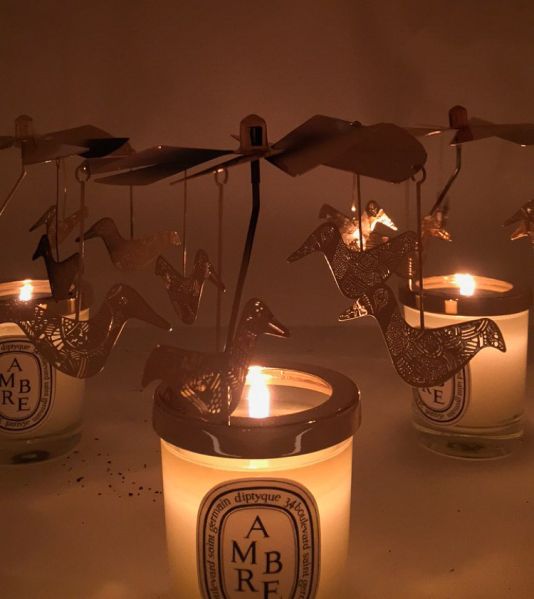 Tucked away into a far corner stands a wallpapered box that holds three of the collection’s Amber candles adorned with whimsical golden bird carousels, only visible through a carved out peep-hole. To the right was a line of connected booths, each holding a mix of musical playlists, keepsakes and prints that inspired scents both past and present.

It is the connection of brand’s past and its present that is the core of the 34 Collection. “The purpose is really to reinvent what diptyque was at the beginning in the early ’60s,” said Badault  “There is lots of inspiration coming from archives. No other brand has this kind of heritage. It’s a way to tell the diptyque story in a different way.” 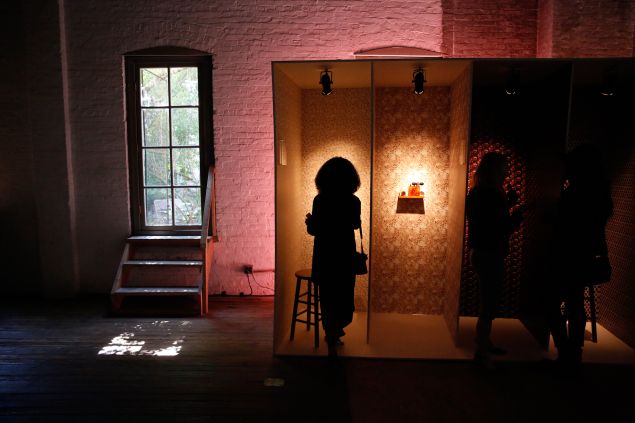 Interactive booths include perfums, keepsakes and playlists that inspire scents past and present (Photo: Anton Lombardi)

The 34 Collection, also named the Les Voyages Collection, serves as a type of olfactory storytelling, evoking travels to France, the Mediterranean and Asia. From the fresh, breezy scent of Mimosa, to the brand’s most famous scent Figuire, to the sensuously floral Tubereuse, the collection’s candles, body oil and parfums are intended to transport patrons outside of their current place and time.

As a nod to the brand’s French roots, an alcove to the left holds a pastry chef baking fresh madeleines with sweet toppings ranging from chocolate to powdered sugar. The madeleine plays a significant role in French nostalgia, and within Badault’s own childhood memories. Inspired by the buttery smell of the madeleine, she returned to her favorite patisserie in the south of France and helped to recreate the scent in the form of the La Madeleine candle. 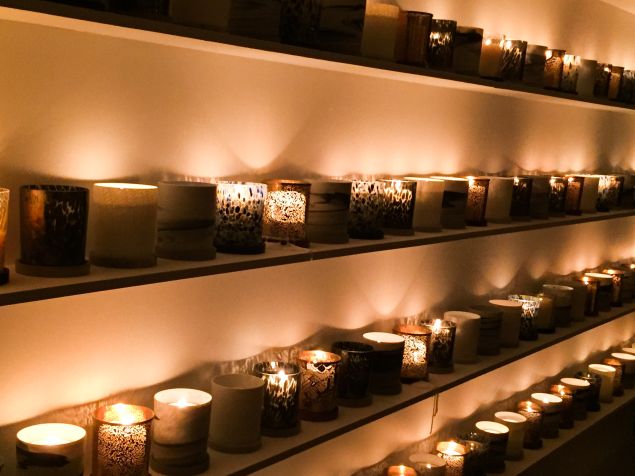 Against the back wall, a small printer in the back created keepsake prints of tagged Instagrams of the event. A sharp turn reveals the pop-up’s piece de resistance: a wall of 240 burning candles. The organic simplicity of the candles, mixed with pop-up’s Instagram-worthy backdrops, makes for a fitting debut for a current collection that celebrates its heritage.

The diptyque 34 Bazar pop-up will be open to the public through December, The Invisible Dog, 51 Bergen Street, Brooklyn, diptyqueparis.com 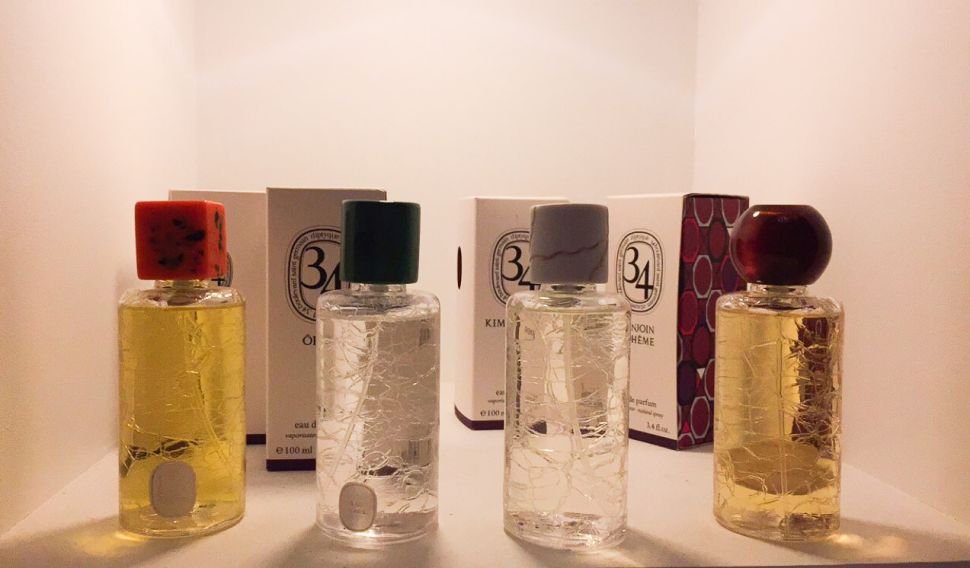