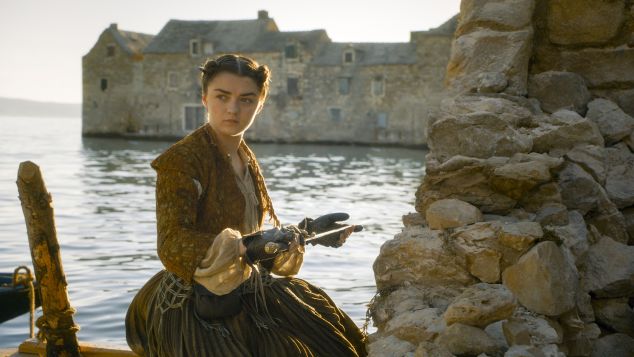 Welcome to our TV Fashion column, where TV Ate My Wardrobe‘s Emma Fraser discusses the trends in television apparel. This week: The Stark family on Game of Thrones proves you are what you wear.

This week’s TV Fashion Download could be called the Game of Thrones: Where Are They Now? Several faces from seasons long ago made a reappearance and in an extension of last week’s Stark wardrobe discussion there is a lot of reclaiming and shedding of name via clothing and accessories. The accessories in question are not like the mystical power necklace Melisandre and other red women wear, but are the more obvious instruments of death. A sword can mean much more beyond its intended purpose of protection and killing.

Let’s start with Arya, who might be geographically far away from her sister and brother (half brother/cousin), but she makes a big move that suggests she is not long for Braavos. Where better to go than home? When Arya was told to rid herself of all possessions she did so with the exception of one very important thing; the sword Jon made her back in season 1 before he left for the Night’s Watch. This gift is just as valuable in reminding Arya of her heritage as the cloak Sansa made Jon last week and has served Arya well throughout her many trials and tribulations across Westeros. When she fails to complete her killing task she heads straight for the rocks where she hid Needle. Now she is marked woman this weapon is all that stands between her and a skin peel which will lead to permanent residence in the Hall of Faces.

Arya’s death list includes Cersei Lannister, but she ends up with a proxy version to kill; Lady Crane looks and dresses like Cersei but she is far from the woman who was part of the plot to kill Ned Stark. Arya’s joy at “witnessing” Joffrey’s death by poison is soon replaced by sorrow as she figures out that petty jealousy is why Lady Crane is her intended target. When Lady Crane catches Arya sneaking around backstage she is compassionate towards her asking if she likes playing different characters and compliments her on the expressiveness of her eyes. Eyes that have only just been able to see again. The poisoning is all but done and just as Lady Crane is about to take a sip of her deadly rum Arya knocks it from her hand and points to the woman dressed as her sister Sansa with the warning that she wants Lady Crane dead. The Many Faced God will not be pleased that Arya chose the name Mercy as her alias and demonstrated this quality in such a literal fashion. 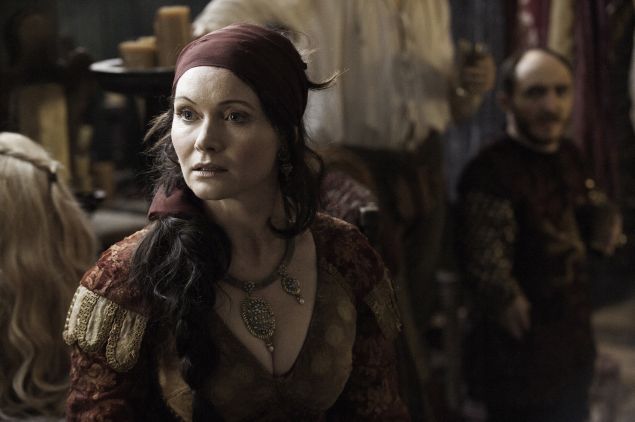 There is no denying who Arya really is and while she has taken on the persona of many throughout her travels from King’s Landing to Braavos there is always that Stark honor threatening to bubble to the surface. Arya can’t kill without knowing the reason or while under threat and no matter how hard she tried to lose her Starkness; by keeping Needle close by it was always going to be a case of when and not if that she stopped denying who she is.

Samwell Tarly has a difficult homecoming and one that gives him the opportunity to take another weapon that will be come in handy against White Walkers. Sam joining the Night’s Watch meant a loss of inheritance, but he had little choice as his father threatened to kill him if he didn’t. The Tarly’s live in quite an impressive location and the reputation of wildlings is no better here than at Castle Black before Jon made his pact with them. It is not pertinent for Sam to tell his family and especially his father about how he actually met Gilly if he wants to complete his Maester training here at home.

In a dinner scene that feels a little reminiscent of Jack Dawson dining in first class in Titanic, Gilly’s borrowed pretty frock and silverware confusion shares all the markings of being way out of her league. There is plenty of sneering and Sam’s father Randyll is a perfect combination of Billy Zane’s Cal and Frances Fisher as Rose’s mother. He can’t even let his son enjoy a bread roll without commenting on his weight. Just have the bread roll, Sam.

Reading books is no way to win the approval of this bad dad and Sam’s White Walker killing achievement is viewed as no more than fantasy, which is quickly forgotten when Gilly’s wildling heritage comes to light. Instead of doing as his father says Sam not only flees with Gilly and baby Sam in tow – when he tells her to get her things she points out that she has none, which is helpful in light of this quick exit – but also stops by to pick up the Valyrian-steel sword by the name of Heartsbane that he has been told should be his inheritance, but will never be in his possession. Sorry papa Tarly, but Sam has other ideas and I have a feeling this weapon will be used against the White Walkers Randyll doesn’t believe exists. What is the point of having a sword like that if is it just going to sit up on a mantle gathering dust? Sam might not look like a fighter, but his book smarts mean he is far more equipped to deal with the winter that is still coming. 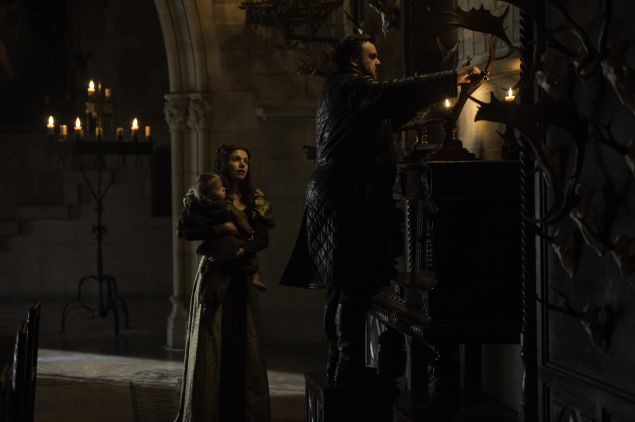 Hannah Murray and John Bradley. Macall B. Polay/courtesy of HBO

In a dramatic shedding of clothes Jaime removes his now out of date Kingsguard armor in front of his nephew/son and ponders what his punishment should be now that the crown and faith are one and the new Kingsguard armor sigil represents this union with a seven-pointed star and a crown in the center. There is no naked walk of atonement on his horizon; instead he must head to Riverrun and help the Freys win back this castle. What is Jaime if he isn’t part of the Kingsguard? Well he is still a Lannister (the preview for next week doubles down on this with his armor choice) and while he argues that they are being torn apart Cersei remains confident in their position. She still has a Mountain after all and her trial will be one by combat. I expect if anyone is going to get torn apart it will be whichever poor soul will be fighting against the Mountain.

And so we come to this notion that the Stark collective consciousness is coming back online with a reminder of the wedding that ended very badly indeed for anyone with the name Stark or Tully; the North does indeed remember. Ramsay Bolton has a Stark bargaining chip and Walder Frey has a Tully to trade for Riverrun. Edmure has been languishing in the dungeon since that fateful night and “Blood of my Blood” sees the return of one of the busiest guys on cable TV at the moment (see also Outlander and The Night Manager). Tobias Menzies as Edmure looks quite the shell of his former self and it will be interesting to see what his uncle the Blackfish does when presented with his kin. 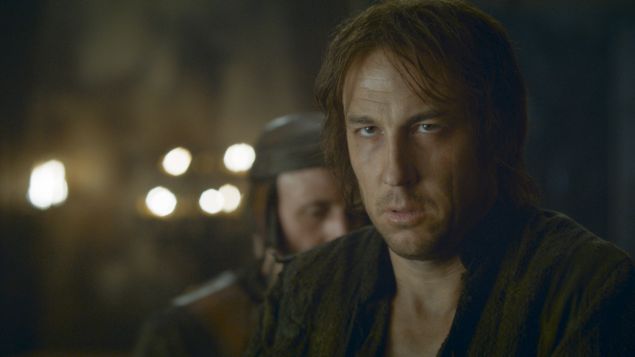 All roads lead to Riverrun as Brienne is also headed in the direction coming as a representative of the Blackfish’s niece, Sansa Stark. Jaime comes from the other side and foes who then became friends will also have a dilemma to contend with; Brienne is wearing the armor and wielding the Valyrian-steel sword Jaime gifted to her after all. The sword that was forged from Ned Stark’s and that Jaime told her to protect Ned Stark’s daughter with. The sword that Brienne named Oathkeeper. A name that now sounds like a klaxon of doom for these unlikely friends. Oh, this is going to get very awkward when they come face to face.

A weapon of another kind saves Meera and Bran from the wights that are still on their tail despite Hodor’s (*sob*) best holding the door efforts. Flames as well as steel come in handy here and the caped stranger is in possession of both. This is no stranger and after his disappearance in season 1 Benjen Stark makes a well timed return to save his nephew. Benjen has featured in Bran’s trip down all the memory lane and it turns out he is pals with the Three-Eyed Raven and the Children of the Forest after they saved him from death0-by-White-Walker. Benjen’s return shows that even those who have long since been given up for dead have a chance of swinging by to save the day and if we’re going to bring back any other Starks a direwolf by the name of Nymeria would be at the top of my list along with a person who would be considered a spoiler.

There are a lot of different weapons in the Game of Thrones universe; for some words are just as dangerous as a pointed blade and power can come in the form of name. Also there are dragons, which seems like an ultimate advantage for Daenerys when she gets those 1000 ships she needs for her army of armies. Those with the upper hand tend to use both physical tools of war such as swords to take what they believe to be theirs and something that is often harder to retain; loyalty of those that follow and serve under whatever banner or idea they represent. Things are forever shifting on Game of Thrones and this season is gearing up for an almighty battle between old and new enemies as well as the living and the dead. Time to suit up, grab those trusty blades and see who is left standing when all is said and done. War is coming. 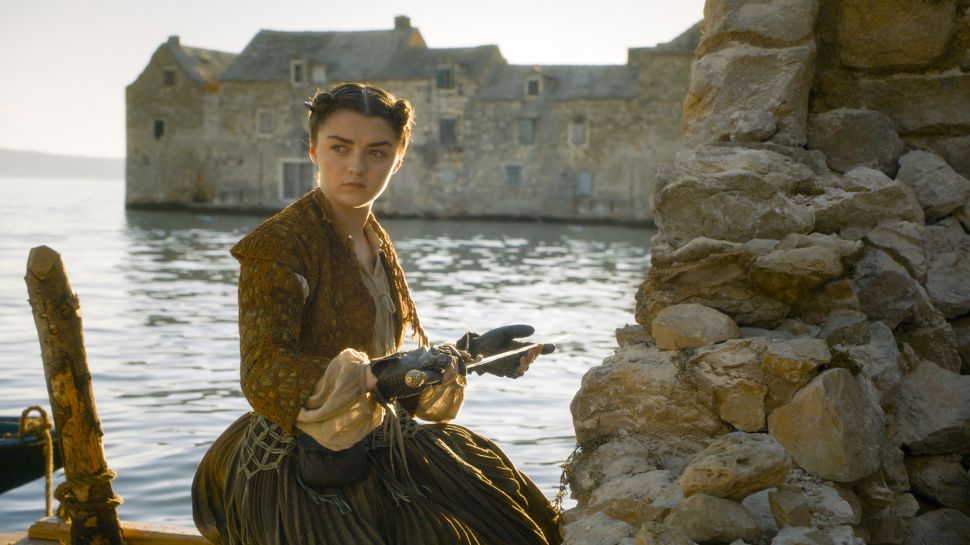