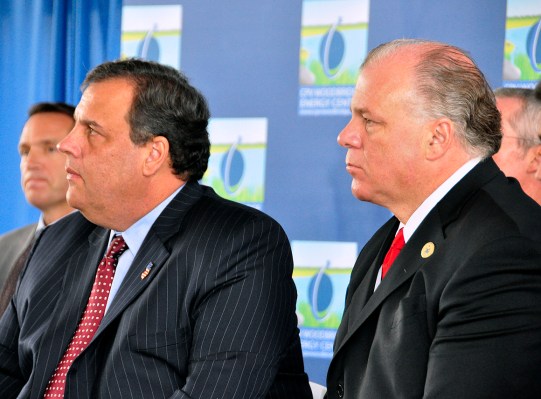 Though they will be bitterly opposed on school funding changes, Governor Christie and Senate President Sweeney both stand to gain from the debate PolitickerNJ

With the announcement of a sweeping school funding proposal on Tuesday, Governor Chris Christie made the first move in a dramatic play for his legacy. Christie, whose term ends in 2017, has seen his approval rating plummet into the twenties since coming forward as the first high-profile Republican to endorse Donald Trump’s presidential campaign in February.

Christie’s proposal to flatten out school aid to roughly $6,500 per pupil statewide could offer him a boost in popularity if he caters to those suburban districts that stand to gain from a boost in state funding and a subsequent dip in their property tax rate. But Christie has also given Senate President Steve Sweeney (D-3) an opening against his rivals in the Democratic primary for the gubernatorial nomination.

Conflict between the governor and the Senate President over school funding would be mutually beneficial, offering Sweeney a way to urban voters in long-suffering districts like Newark, Camden and Paterson by opposing Christie’s changes. That could go a long way toward building Sweeney’s support up north, and help him against one primary opponent: Jersey City mayor Steve Fulop.

Christie, in offering an alternative to Sweeney’s recent call to revise the school funding formula, will gain a welcome distraction from his controversial role in Trump’s ascendancy to the Republican nomination and a way to shore up his approval ratings with a concise and comprehensible message of middle class tax relief.

Though he called Christie’s plan both a long-shot in the Democratic-controlled legislature and “patently unfair to poor school districts,” Seton Hall political science professor Matthew Hale said that the governor has a lot to gain from pushing for the changes.

“This is about Chris Christie trying to salvage his reputation,” Hale said. “This is so much simpler than Sweeney’s proposal. He can say it in one sentence, so it doesn’t exactly take a lot of thought to give everybody exactly the same amount of money.

“A lot of the places in New Jersey that could be characterized as swing districts, or not urban centers, actually do stand to gain from this proposal. And that, I think, could be very popular.”

Hale noted that in Camden, where the district’s budget relies on state contributions, funding would drop to that $6,500 per-pupil level from around $30,000 — a decline that would be all but impossible to make up for. Suburban districts that are already adequately funded, meanwhile, would see per-pupil increases of up to 800 percent.

“We haven’t seen much of an appetite for him to go out and campaign for anybody except Donald Trump. But maybe this will be a turning point,” he continued.

Rider University political science professor Ben Dworkin agreed that the school funding plan could help the governor get out from under Trump’s shadow. Follow-through and consistent public appearances in the state will be crucial, he said.

“It’s going to be controversial, and it may well bring back some of his base, many of whom have been disappointed by his embrace of the Trump candidacy,” Dworkin said. “If he does that with this, then I’m sure the poll numbers will go up as a reflection of that kind of engagement.”

The governor, Dworkin continued, needs to reverse course and start catering to his base in the state to leave office with improved numbers.

“He simply has not followed up the way that he did in earlier years with a sustained public presence,” Dworkin said of Christie’s long absences from the state in the last year.

“If this is a one-off speech, I’m not sure it’s going to have any effect at all.”