Tarzan and all of the other jungle characters created by Edgar Rice Burroughs in 1912 have been dragged out of mothballs in countless movie incarnations, thrilling new generations and featuring a wide variety of Muscle McGurks from Buster Crabbe to Lex Barker, most famously in the series of MGM blockbusters starring Olympic swimming champion Johnny Weissmuller as the Ape Man and Maureen O’Sullivan (Mia Farrow’s mother) as Jane. The last time around the tree house was the 1984 saga Grekystoke: The Legend of Tarzan, Lord of the Apes with French hunk Christopher Lambert, which attempted to tell the original story as visualized by the author. Some producer who is firmly convinced that the moviegoing public has an insatiable appetite for monkey business has now come up with a lavish, expensive, woefully digitalized version of the legend that is again based on the original Burroughs adventure. The vision conceived by director David Yates, who made the final four Harry Potter films, is so close to the 1984 Greystoke that I fear the public may prove him wrong. Despite the exorbitant price tag, it all looks and feels perilously close to something we’ve seen before.

Fans of the old MGM series will be disappointed that Jane has become an American, there is no Boy or mischievous chimpanzee named Cheetah (both of whom were MGM inventions), and Tarzan is now an impeccably dressed English aristocrat refined by perfect diction and the title Lord John Clayton III, heir to the estate left by his grandfather, the sixth Earl of Greystoke. Flashbacks refer to the shipwreck on the Ivory Coast that left him stranded in the wilds of Africa and raised by gorillas. Twenty years later, he was discovered as a man nude as the censors would allow, swinging on vines and returned to civilization where he exchanged a loincloth for a three-piece suit and learned to prefer Earl Grey tea to yak milk. The new plot begins when Tarzan, now an emissary from Parliament, returns to the Congo with Jane in tow to save the natives from exploitation and a genocide masterminded by diabolical Belgian villain Captain Leon Rom (Christoph Waltz), who plunders their diamond supply, guarded by a tribe whose chief promises him the jewels on one condition: bring back Tarzan for the tribe to torture and kill. Tarzan declines the invitation with one of the film’s best lines: “I’ve already seen Africa—and it’s hot!”

You have to admire the sheer physical scope of this epic, even if there are no animals in it. The gorillas, lions and crocodiles hankering to make a meal of Tarzan are all computer-generated and have lost their bite. The gorillas snarl and bare their fangs, fighting Tarzan out of revenge for old time’s sake, but they look like dress extras in gorilla costumes from old Jungle Jim flicks. Jane (Margot Robbie) misses her old sarong but still speaks a mean Watusi. She gets chased through the at high speed by a hungry hippopotamus. Handsome Alexander Skarsgard is pumped, buffed and camera-ready, but too pretty and delicate-looking to be mistaken for Tarzan. And Samuel L. Jackson, of all people, is a survivor of the Civil War who tags along to make sure the natives are not turned into slaves. Which leaves Waltz to walk away with most of the footage conducting another of his sublime master classes in the art of delectable villainy, a smarmy smile on his face in a white ice cream suit. Everyone else in The Legend of Tarzan is like the impostors on To Tell the Truth. 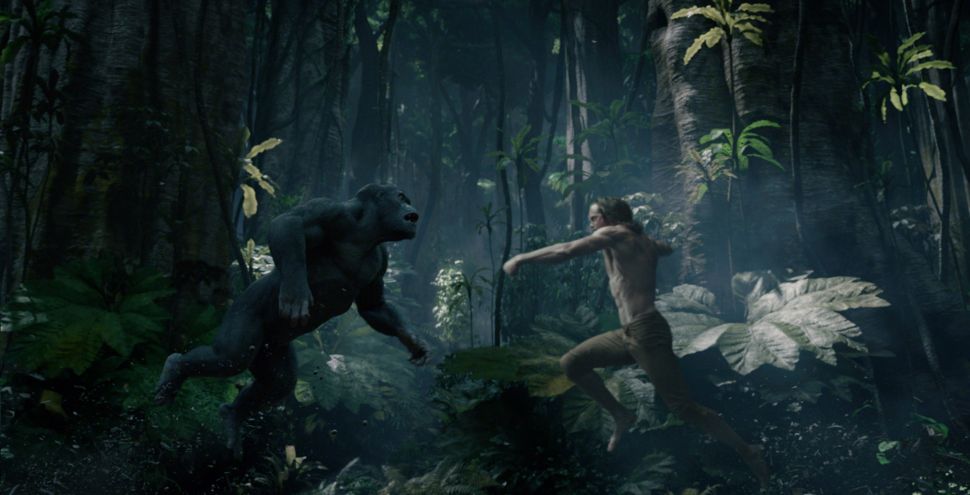