Fresh off her viral spin promoting Vogue covergirl Amy Schumer, Anna Wintour trotted out some new material at the annual excuse for media and advertising executives to get a company-sponsored trip to the south of France that is the Cannes Lions International Festival of Creativity.

The Condé Nast creative director and Vogue editor in chief wisely dotted her speech about fashion and media with fairly innocuous jokes about US presidential candidates, reported the New York Post‘s Page Six.

“Politics is not traditionally a creative industry, but in America its currently being dominated by people with very active imaginations,” she said about Donald Trump.

Wintour went on to reference Bernie Sanders when talking about a GQ story on hermits that was an unexpected hit. “Hermits are not publicity seekers, unless of course you count Bernie Sanders,” she said, before calling the septuagenarian senator “as old and as snow capped as Mont Blanc.”

Hillary Clinton, a candidate for whom Wintour has fund-raised and worn a Marc Jacobs T-Shirt, got off with a joke about private email servers.

Sure, none of those jokes are likely to offend—they were more along the lines of Trevor Noah-style bemusement than John Oliver’s pointed outrage. But as Wintour noted in her speech, the industry has changed.

“When I became editor of Vogue in 1988, if you had told me about everything that was to come in digital, that we would be coding our content, not to mention that [Condé Nast] would also be doing film and books and television, as well as events, podcasts and more, I would have had a heart attack,” she said. “I was struggling to get the magazine on the newsstand every month.”

But now, even Anna Wintour has to make viral videos and political jokes.

“Dare to be different,” she concluded. “In fashion, in advertising and certainly in journalism, there is always the pressure to produce, the market always seems to want a little bit more.” 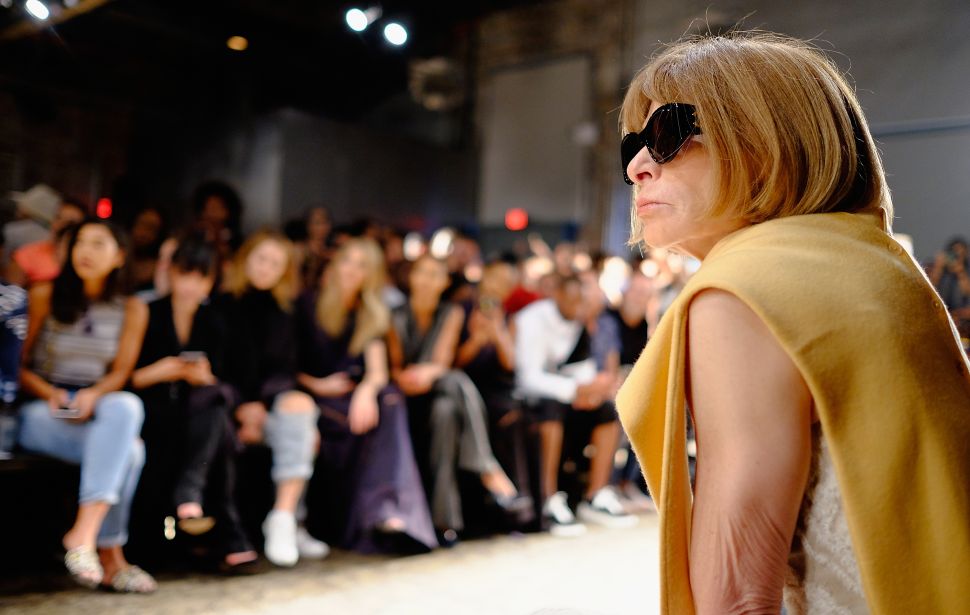