The years have salt-and-peppered his hair. He sports his share of wrinkles, crinkles and other signs of the times. But there’s something eternal and imperishable about Matthew Broderick’s boyishness. It’s as though Ferris Bueller took only one day off.

Ferris is still Broderick’s most famous creation—the first to mix crafty cunning with airhead innocence—and he has been Ferris-wheeling various versions of that ever since. Don’t look now, but that was 30 years ago.

That persona has served him well over these years, but every once in a while—just when you think you’ve got his number—Broderick will pull a fast one out of his bag of tricks and come up with a performance that can startle you with its power.

Handy case-in-point: Shining City, which the Irish Rep is reviving to launch its newly renovated digs on West 22nd Street. Like most Conor McPherson plays, it explores the Irish psyche in the guise of a ghost story (two psyches, in this instance: a former priest-turned-therapist and his patient, a new widower—both at the crossroads of their lives).

“In some ways,” Broderick says, “the play is really about the therapist taking on the problems of the patient. I guess that’s what happens in therapy. Both sides kinda learn things. This is almost a literal version of what happens in that relationship.”

Broderick does most of the talking as the patient, unburdening himself about the wife he has lost in a horrific car crash but still sees wafting around the house.

Getting to the root of his problem necessitates an epic confessional monologue that runs 20 pages in print and a good 35 minutes in playing time. Here and there, it’s punctuated by a word of encouragement from the attending therapist, but otherwise it is unbridled, uninterrupted Broderick Concentrate illuminating Shining City.

“I did not know Billy Carter, and I couldn’t be more impressed with him,” he says of the actor playing the shrink. “At the end of the play, we have a normal conversation, but the therapy scenes are mostly me talking, and Billy is a great scene partner. The way he watches, I can feel what he’s thinking, and that affects how I talk to him. Even when I’m doing most of the talking, it feels like we’re having a dialogue.

“He’s also there should I get lost—which, thank God, hasn’t happened yet. When I stumble, if I look up, he’ll nod or throw a word in. He’s right there to help me out.”

The troubled outpourings were not easy to learn because the character is not overly articulate. He talks in fragmented, elliptical sentences that, more often than not, trail off into “…you know?” (By actual count, there are 224 of those in McPherson’s script.)

“People may think I’m stumbling for words, but it’s really written that way. The sentences almost never finish. It just goes dot, dot, dot and then ‘you know?’ It took a while, but, as you learn it, you get the rhythm of it, and it’s great. It’s beautiful writing. You can tell the care that was put into each little broken sentence.”

Not making any of the above easier, Broderick opted to play the role in full-out “Dublinese.” “I don’t know if I sound exactly like I’m from Dublin, but people do say I sound Irish. Stephen Gabis, the dialect coach, taught me the accent. He made tapes of Irishmen for me to listen to. He was fantastic. I could email him, ‘How do you say this word?’—and BAM! he’d send the answer right back. I did work hard on it.”

Being half-Irish helped. Broderick’s roots go back to Kilcar, in the south west of County Donegal. “We have a home there and spend summers there, sometimes Christmas. My parents bought it when I was a kid. I don’t know any of my Irish ancestors, which I must have since my father was Irish, but we haven’t found them.”

In Shining City, Broderick acts his exact age—54—and it weighs on him that his dad, actor James Broderick, lived only a year longer. “He died right after the first table read of Brighton Beach Memoirs. It was devastating. He got sick the age I am now, so I do check-ups, but you can’t check everything. What he died of was completely hopeless whenever you find it. It was the kind of cancer that’s impossible to cure.”

The first acting Broderick ever did, at age 17, was with his father—in a Horton Foote play called Valentine’s Day. “My father did many, many Horton Foote plays. His first paying job was a television play that Horton wrote in the days of live television—The Dancers, I think. Horton was very proud that my first professional job was On Valentine’s Day. He liked to say, ‘I gave both of you your first jobs.’ ”

Broderick’s father did live long enough to see he had steered his son in the right direction. Brighton Beach Memoirs led to Broadway and the first of two Tonys. The second came two plays later for How To Succeed in Business Without Really Trying.

‘I wasn’t in on that,’ says Broderick about the possibility of reuniting with Nathan Lane for The Front Page. ‘But I think it would be a little weird. We should, maybe, take a little break from each other.’

He has had 11 Broadway outings in all, three very successful ones with Nathan Lane (The Producers, The Odd Couple and It’s Only a Play). You would have thought Broderick would have been asked to play Hildy Johnson to Lane’s Walter Burns in the upcoming re-plating of The Front Page, but no. “I wasn’t in on that, but I think it would be a little weird. We should, maybe, take a little break from each other. ”

His current debut with the Irish Rep came about in a circuitous way—via the PTA. Broderick and Ciaran O’Reilly, producing director at Irish Rep and the director of Shining City, “have kids in school together, and he gave me the play to read. The last thing I wanted to do was another play, then I read it and loved it. It was so good, and it had such a wonderful part for me. Then, I put off deciding until it was time to decide, and, by then, I thought I wouldn’t have enough time to learn all those lines.

“My son, James, heard me whining to my wife and jumped in. He said, ‘Get out of your comfort zone. You should do it.’ So I’m doing it. I couldn’t disappoint James.”

In addition to 13-year-old James, Broderick and wife Sarah Jessica Parker have twin daughters on the brink of 7. Has it come to this? Ferris Bueller, family man? ν 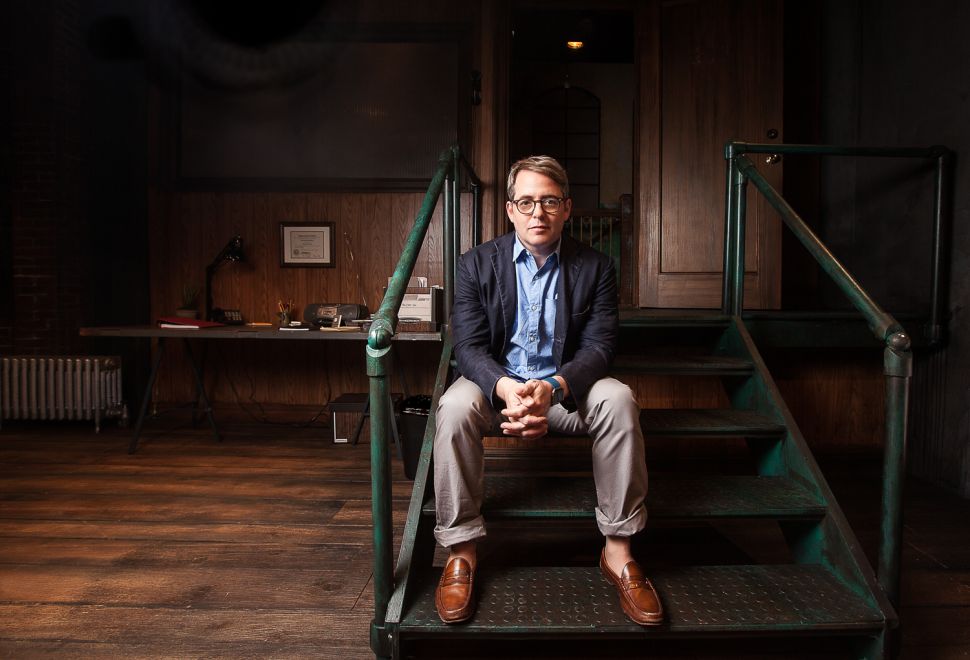