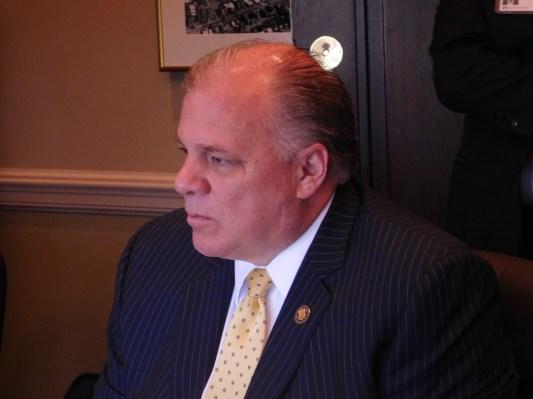 That 2011 legislation was the result of compromise between Sweeney, state Democrats and Republican Governor Chris Christie. Asked about today’s ruling at an unrelated State House press conference, Sweeney placed the blame for the state’s liability with Christie’s failure to make statutorily required pension payments and predicted that the COLA freeze will end.

“We didn’t end it, we suspended it,” Sweeney said of the 2011 COLA legislation. “We suspended it until we could afford to pay it. There’s a difference.

“The way the pension systems are set up, the biggest ones are going to be able to restore the COLAs. We didn’t eliminate the COLAs, that was the point.”

Sweeney is leading the charge on a constitutional amendment that would require the state to make quarterly pension payments, with half payments by 2017 and full payments by 2021. That measure advanced in an Assembly committee this week, with staunch Republican opposition.

Justice Jaynee LaVecchia said on behalf of the 6-1 majority that the state was within its rights to withhold adjustments it can’t afford.

“We conclude that the Legislature retained its inherent sovereign right to act in its best judgment of the public interest and to pass legislation suspending further COLAs. Having determined that there is no contract violation, and because the additional arguments advanced by plaintiffs are not meritorious, we must respect the legislative choice,” LaVecchia wrote.

New Jersey Education Association President Wendell Steinhauer called the decision another in a long line of failures on the state’s part.