The gun George Zimmerman used to kill Trayvon Martin in 2012 sold for over $120,000, and although it makes legal sense, there’s still something odd about the fact that the deadly firearm was returned to its owner to reap a handsome profit. Here are the fates of some other items central to notorious events in American history:

It was the first of many “crimes of the century.” On March 1, 1932, Charles Lindbergh, Jr. was kidnapped from his crib in what was at the time referred to as Hopewell, New Jersey. Found in the baby’s room was a ransom note rife with spelling errors, as well as a peculiar identifying mark to make plain whether future communications came from the actual kidnapper(s). The ladder the abductor used to reach the second-floor bedroom was quickly found on the property.

The kidnapper was wise to use a symbol to identify himself. Soon after many letters reached the Lindberghs, with cranks demanding ransom and half of America offering advice and false leads. A series of bizarre exchanges led to Lindbergh paying an enormous ransom, to no avail. The toddler’s body was found near the Lindbergh home on May 12, 1932. The crime was eventually tracked to Bruno Hauptmann in the Bronx, an illegal immigrant from Germany. Though some would like to believe Mr. Hauptmann was innocent, it’s hard to explain why, for example, he had tens of thousands of dollars of Mr. Lindbergh’s ransom money in his possession.

The ladder and the ransom note are on display at the New Jersey State Police Museum in West Trenton, New Jersey. The exhibit also includes the baby’s onesie, removed by the kidnapper from the already-dead infant and later sent to the Lindberghs as (fraudulent) evidence that the child was alive and in safe custody. Charles Lindbergh was so repulsed by the whole affair that he later moved to Europe, as disgusted with the American press as he was with the levels of domestic crime. The first man to fly solo across the Atlantic would go on to achieve notoriety as one of the most prominent spokesmen of the America First Committee, which opposed U.S. entry into World War II. As for the child’s remains, they were cremated and later sprinkled over the Atlantic in a secret solo flight by dad.

Presaging the Zimmerman auction, the rifle that shot the “magic bullet” that killed JFK was the subject of much controversy over ownership. Oswald’s widow sold her rights to the 6.5 mm Carcano Model 91/38 carbine to a Colorado oilman, who sued the government for possession. The legal acrobatics were as intricate as some of the Kennedy conspiracy theories, with arguments being heard over whether Oswald abandoned the gun in the legal sense, or if the fact that he bought the gun under a pseudonym rendered the sale invalid in the first place. Eventually the government was given full ownership of the deadly weapon. It’s securely stored at National Archives and Records Administration Building in College Park, Maryland, which for a few decades also stored…

What did the President know, and when did he know it? That was the question hovering around the Watergate investigation that spanned from 1973 to 1974. President Nixon’s plausible deniability went out the window when White House assistant Alexander Butterfield revealed there was a recording system in the White House that captured the President’s conversations. President Nixon stonewalled the tapes’ release—with very good reason. When the Supreme Court forced him to release them, it was all over and President Nixon was soon forced to resign. One has to wonder what was in the missing 18 minutes of the tapes, given how damaging what remained was.

After Mr. Nixon left the White House, Congress passed the Presidential Recordings and Materials Preservation Act to seize control of Mr. Nixon’s papers and the tapes lest they be returned to him and destroyed. They remained at the National Archives in College Park, Maryland despite Mr. Nixon’s several legal attempts to reclaim them.

In 2004, Congress amended the act to allow the establishment of the Nixon Presidential Library in his hometown of Yorba Linda, California. The library was jointly operated with the National Archives at first and then run by them completely. This allowed for the transfer of all of the White House tapes to the library. Since then, it’s been digitizing and releasing the audio on its website.

It was the most famous car chase in the world. On June 17, 1994, Al Cowlings got his buddy O. J. into his 1993 Ford Bronco and decided to high-tail it to Lord knows where. The first helicopter reporter on the scene was then known as Bob Tur, who as the current Zoey Tur would famously butt heads with Ben Shapiro on Dr. Drew’s show. Soon everyone worldwide was watching the chase from news helicopters.

After Cowlings was released on bail, he decided to sell the vehicle for $75,000—and eventually reneged on the deal, prompting a lawsuit. Eventually the car was sold to pornographer Michael Pulwer, who sold it a friend known only as Hunter (who refuses to discuss its whereabouts).

But here’s where things get weird: There were actually two white Ford Broncos. O.J. had a white Bronco of his own. Cowlings had wanted to match his buddy, so he bought one as well. It was O.J.’s Bronco that was seen outside the crime scene. That Bronco was bought by O.J.’s agent Mike Gilbert, who has kept it in storage in a “central California garage” for the past twenty years. The current whereabouts of the bloody gloves, however, are still unclear.

In 1998, Hillary Clinton was asked about the allegations against her husband on the Today show. The First Lady had a perfectly-worded answer. “If all that were proven true,” she said, “I think that would be a very serious offense. This is not going to be proven true.” Little did the future senator suspect that “semen-stained dress” would become the phrase of the year.

At the time, Lewinsky told Barbara Walters she’d burn the dress if she ever got it back. Now, however, she is refusing $1 million offers to sell it and put in on display (apparently it’s with her mom for safekeeping). Not to worry: Clinton fans can see the dress, kind of, at the National Portrait Gallery. Clinton portraitist Nelson Shanks snuck the dress’s shadow into his painting of the impeached former president. 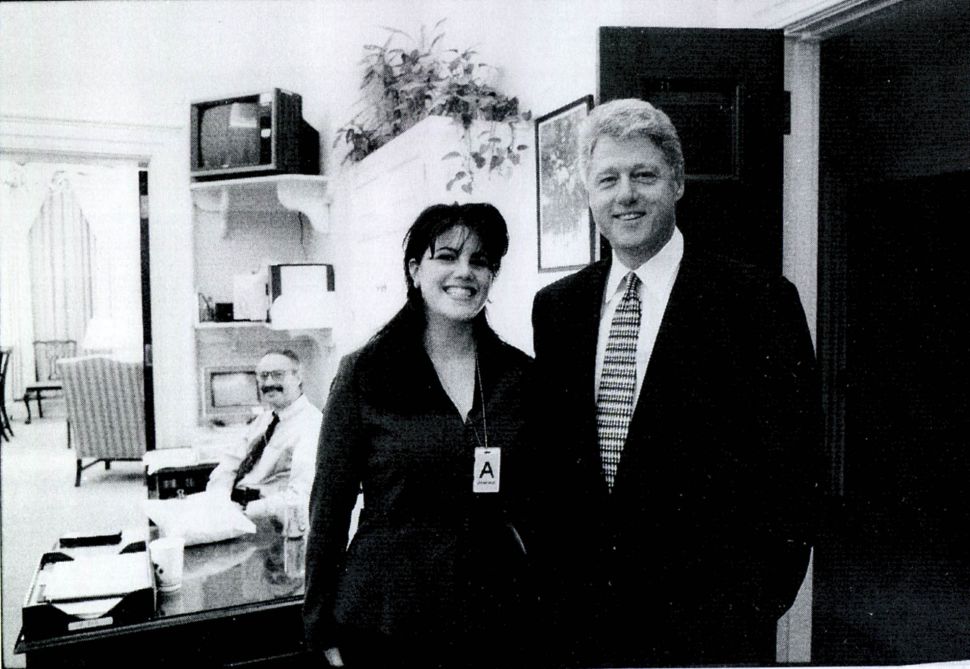