Like a cheap, drunken night at a Braavosi brothel, Game of Thrones usually leaves us with far more questions than answers. Each week, we’re going to take a deeper look into every single Q HBO’s fantasy mega-hit needs to A. Next up: SEASON SIX FINALE BOUTTA’ BE WILD(FIRE).

Just how many trials are about to happen in King’s Landing?

Two. Two trials, and neither of them will be of the “BY COMBAT” variety because Tommen Baratheon took a few online religion courses and now thinks violence is, quote, “Yucky no-good.” One of the defendants is Loras Tyrell, who the High Sparrow is accusing of being too gay for a universe that includes dragons and ice-zombies. Ironically, the High Sparrow is doing this because he himself is a huge dick.

The other trial concerns one Cersei Lannister, who is pretty much boned in a trial that doesn’t involve Gregor Clegane tearing out someone’s innards with his bear hands. Not a typo.

Luckily, it appears Cersei has a plan to introduce hot burning death and destruction to the jury, along with all of King’s Landing. You see, Cersei isn’t the kind of person to go down without dragging every living soul around her down, too. Two weeks ago, she asked Qyburn to confirm a tiny rumor she’d been looking into. Last, Tyrion coincidentally explained to Daenerys that there are entire caches of wildfire underneath all of King’s Landing, just in case the Mad King Aerys Targaryen ever wanted to throw Westeros’ biggest BBQ. It’s looking like Cersei feels lighting King’s Landing up like a candle seems preferable to being found guilty in a fair trial. To be fair, she told y’all she’d do it.

What’s really interesting is that Aerys never go to see his firework show because Jaime Lannister stuck a sword in his back. George RR Martin and the dudes who bring his story to HBO love themselves some parallels in their storytelling. Could Jaime, after a quick pitstop at The Twins, arrive just in time to see Cersei give the old “burn them all“?

Speaking of that beautiful, gold-handed son of a bitch…

Is Jaime about to get Red Wedding’d?

After a successful re-taking of Riverrun, Jaime sits down at the site of the Red Wedding for dinner with Walder Frey, which is the equivalent of sitting down in a literal nest of vipers underneath a precariously balanced boulder covered in spikes for dinner with Charles Manson, who you owe $50 to.

“The Freys, AND the Lannisters, send their regards” is an obvious callback to the words Roose Bolton said to Robb Stark right before killing him and everyone he loves, which in hindsight I’m starting to think is not the actual definition of “regards.” Either way, is Jaime in any danger here? He doesn’t have any actual problems with Walder Frey. Although it also wouldn’t shock me if Walder has simply gone senile and thinks Jaime is an overgrown houseplant.

Many, however, think Red Wedding Part Deux won’t come from within, but from the outside. Namely, some fans–including Vanity Fair’s Game of Thrones expert Joanna Robinson–have hypothesized that Arya Stark is going to show up and cross Walder Frey right the fuck off her kill list.

It’s intriguing, but I’m not sure how it would work. The only way Arya could make it from Braavos to Westeros in this short of time is if she had A) A speed boat, B) A helicopter, or C) Daniel Radcliffe’s farting corpse.

What’s the situation up North after the Battle of the Bastards?

Ramsay Bolton is dead, the Starks once again have Winterfell, but in the aftermath it might be time for both Jon Snow and Sansa Stark to realize they fucked up and got hundreds of people killed. Jon, despite everyone telling him to not fall for Ramsay’s tricks, charged straight ahead into Ramsay’s entire army with nothing but his sword and “Hey I’ve already died once”-sized balls. Sansa, despite everyone telling her Jon couldn’t possibly take Winterfell with an army made up of 115 homeless dudes, declined to mention the chance Littlefinger could add roughly 5,000 more guys with horses, armor, and weapons not made of gingerbread.

Wun Wun died because of this. I’m not sure I’m ready to forgive that.

How screwed is Melisandre?

So, just a reminder, Melisandre done goofed last season by setting Stannis’ daughter Shireen on fire, which Stannis thought would help in his attack on Winterfell. It didn’t. Stannis died a hilariously well-deserved off-screen death, and his entire army was destroyed.

Davos Seaworth, who is pretty much the only good person left on this show, was a huge fan of Shireen. She taught him how to read. It was goddamm adorable. As a result, Davos finding out that Melisandre turned Shireen into an ash pile was super upsetting. Naturally, he turns to Jon, the hero commander that just smashed Ramsay Bolton’s face in with his fists, for some justice.

My concern is that Jon…isn’t going to care that much? This isn’t baby-faced Jon Snow that willingly signed up for a lifetime of virginity and frozen piss out of some sense of duty. This Jon was stabbed to actual death by his sworn, saw nothing but endless blackness on the other side, and then was brought back against his will to fight an un-winnable battle. That rearranges your priorities a little bit. And Sansa’s no help. Sansa told Jon to pretty much give up on any chance of saving Rickon’s life and guess what? She was right.  After all that, what’s one little girl Jon has never even met?

Is Daenerys ready to play the game?

Let me tell you a quick story: I had an early growth spurt, around 11 or 12 years old, which made me a dominant force in the realm of eighth grade basketball. I was Shaq. I was Lebron. I was basically dunking on other dudes before we even knew what boobs looked like. And then, then, I went to high school, everyone else grew, and just kept growing, and I suddenly realized I was actually pretty garbage at basketball.

That’s Daenerys Targaryen. After countless obstacles and struggles, she finally managed to subdue the slave masters, get some ships and an army, and demonstrate full control over her three dragons. Real impressive…for Meereen. Now it’s game time. It’s Westeros time. Westeros has already dealt with dragons and you know how that ended? They put the dragons in a pit and chained them up until they died forever. “Fuck your flying death machines,” says Westeros in general. In Westeros, you can’t just have the biggest toys. Robb Stark had the entire North. Mance Rayder had giants and mammoths. Joffrey Baratheon was KING, and Tywin Lannister was his Hand. Dead, dead, dead, dead. All of them dead. The problem with Westeros is that you can have all the dragons, Dothraki, and Iron Born in the world and someone still might slit your throat while you’re making a sandwich.

Did I mention the ice zombies? The unstoppable force of death and coldness heading towards the Wall? The reason this whole damn thing is called “The Winds of Winter” in the first place? Someone should probably fill Dany in on all that. Perhaps Jon, who is probably her cousin, which is something else she’s going to have to deal with. 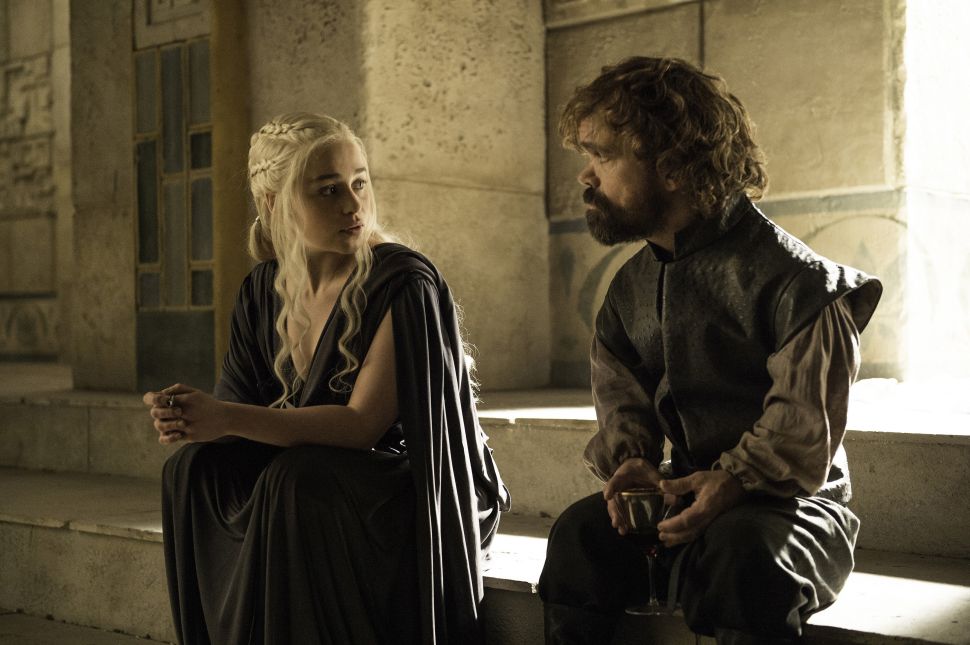