Like a cheap, drunken night at a Braavosi brothel, Game of Thrones usually leaves us with far more questions than answers. Each week, we’re going to take a deeper look into every single Q HBO’s fantasy mega-hit needs to A. Next up: Tits, dragons, and a whole bowl of Clegane.

Is it time to get hype?

So…..okay. Last chance, friend. Either get out now or don your finest tinfoil, pump your hype levels to 11, and come down this road with me.

This episode is titled “The Broken Man,” a pretty clear reference to a conversation between Brienne and a character named Septon Meribald in A Feast for Crows. It’s a heck of a piece of writing from good ol’ George RR, a rumination on the difference between straight crazy, banana-balls rapists and murderers and “broken men,” common folk stepped on and forced into the mud by whatever the Westerosi version of “the man” is.  “[M]ost outlaws are more like this ravening Hound than they are the lightning lord,” Meribald says. “They are evil men, driven by greed, soured by malice, despising the gods and caring only for themselves. Broken men are more deserving of our pity, though they may be just as dangerous.”

(Septon Meribald, if you hadn’t heard, is set to be played by Ian McShane, he of the very frightening face, who put the Game of Thrones fandom into a bit of a tizzy by saying the show was just “tits and dragons.”)

This monologue from Meribald establishes, among other things, that “the Hound” is truly dead. It also takes place on the Quiet Isle, a sanctuary for some monk-ish dudes devoted to the Faith of the Seven, where Brienne casually strolls past a massive gravedigger, who takes a moment from being massive and digging graves to pet the head of a dog. Popular theory dictates that this gravedigger is actually Sandor Clegane. When Meribald tells Brienne “The Hound” is dead, he’s subtly saying Sandor renounced his former, brutal persona and came to the Quiet Isle to live a life of penitence and solitude after Arya left him for dead.

Meanwhile, over in King’s Landing, Cersei Lannister fucked up something fierce. She’s backed herself into pretty much every corner imaginable in her feud with the High Sparrow that her one last chance lies in a trial by combat. Luckily, her champion is the 8-foot-tall undead monstrosity that used to be Gregor “The Mountain” Clegane. Now, it’s up to the Faith to produce a champion of their own to oppose the fearsome Mountain, an almost impossible task.

OH WAIT, the Faith just happens to have a Shaq-sized death-machine of their own just chilling on an island digging graves and making friends with friendly puppers. As an added bonus, this champion just happens to have a lifelong blood vendetta against Gregor Clegane, because A) They’re siblings, duh, and B) Gregor stuck Sandor’s head in a damn fireplace as a kid, condemning Sandor to a life looking like Two-Face’s left testicle.

Look at this GIF again:

It’s marketing 101 that to build excitement you show an unidentified pair of feet approaching the camera. Never, not even once, since the dawn of entertainment, has an unidentified pair of feet approaching the camera not led to a game-changing plot development. Notice how crooked, SOME WOULD SAY BROKEN, that person’s gait is. Notice how he’s walking through a field of dead bodies, which is usually cause to call in a gravedigger. And pay extra attention to what Davos’ voice-over is saying as those legs shuffle into frame: “The real war, it’s between the living and the dead.”

In the context of the episode, Davos is most likely referring to the unstoppable army of zombie Frozen cosplayers approaching from the North hell-bent on destroying humanity. BUT, this statement could just as easily refer to Sandor vs. Gregor. Brother vs. Brother. The Hound, who is very much alive, vs. The Mountain, who is more or less very much so dead.

If you’re new to the internet, this is called the Cleganebowl. The only appropriate reaction, is to get hype.

Who exactly is the Blackfish again?

The Blackfish is Brynden Tully, Catelyn Stark’s uncle, and pretty much the only person not named Frey or Bolton to make it out of the Red Wedding not dead or in a dungeon. As you might have heard Walder Frey slapping his underage wife’s ass about last week, the Blackfish has taken back Riverrun. Riverrun is a lovely stronghold situated conveniently on the banks of the Trident river, and also just happens to be basically impenetrable.

The Blackfish is one of the greatest characters in the Game of Thrones universe just by being, like, the most stubborn dude in history. By holding Riverrun, he’s basically continuing a war that ended just about three seasons ago. Still, we have a bit of three-way race to Riverrun going on. Walder Frey has ordered his sons to take the castle back, Cersei sent Jaime to solve the problem by dramatically looking up as the Blackfish walks toward him, and Sansa sent Brienne, who despite being a fantastic character is still very likely to fuck everything up.

However, for Brienne to even get to Riverrun she has travel through the riverlands, home to OH YEAH the Quiet Isle and Septon Meribald.

What is newly-badass Sansa Stark up to?

Do you think the Lannisters and the Starks would still be at odds if they knew how much they both love dramatically raising their heads?

So basically Sansa, Jon, and Davos are on a recruiting mission to rally any banners left willing to take on Ramsay Bolton. It’s like those college recruiters who came to your high school, if instead of trying to get you to join a frat they were trying to get you to attack an evil bastard goblin-monster in his impregnable northern stronghold.

(Tormund is on a similar mission, but basically all you have to do to get Wildlings to fight is to be like “¯\\_(ツ)_/¯come onnnnnnn.“)

Based on the fist sigil in the background, this stop brings the Stark-Seaworth Connection™ to Deepwood Motte, home of House Glover. The Glovers are one of the last families left that fought with Robb Stark not to since soil themselves into submission for House Bolton. The Umbers were also on that list, until they wrapped Rickon up like a Christmas present and dropped him down Winterfell’s chimney.

Really, the take-away here is that Sansa put on some fur and embraced her Stark-ness in all its snow-drenched glory. No more pretending to be Littlefinger’s niece that he kisses on the mouth an inappropriate amount. Sansa is in straight Queen in the North mode. “I will always be a Stark,” she says, and then seals a letter boldly signed “Sansa Stark” with a waxy Direwolf. “The Broken Man” seems like it will be about, more than anything, that sweet, sweet Stark vengeance.

It’s a shame Michelle Fairley just signed on to that other show, huh…… 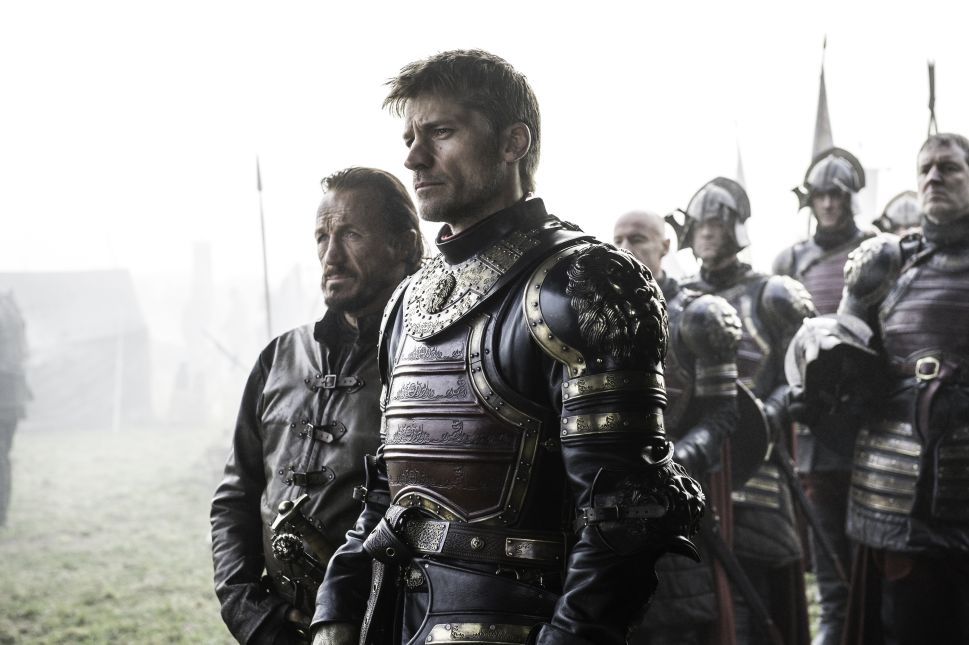