Like a cheap, drunken night at a Braavosi brothel, Game of Thrones usually leaves us with far more questions than answers. Each week, we’re going to take a deeper look into every single Q HBO’s fantasy mega-hit needs to A. Next up: Spider-Stark, A Braime Reunion, and VIOLENCE.

If we can define “alright” as “leaping through Braavos like Andrew Garfield-era Spider-Man,” then yeah, Arya’s doing pretty alright.

But…how is that possible? Last we saw Arya, she had just been stabbed repeatedly by the Old Witch from Snow White. And that turned out to be The Waif, who is–for reasons unknown to pretty much everyone–on a Terminator-esque mission to kill Arya and ONLY Arya despite being the only employee of the Faceless Men, as far as I can tell.

Long story short: In my limited experience, if you successfully stab someone in the stomach it should severely hinder their leaping abilities.

Because the internet is dark and full of nonsense, there’s no shortage of ideas out there as to how Arya survived last week: She swapped faces with a random person who is totes cool with dying. Syrio Forell is back from the off-screen dead, and helping Arya to survive. The Waif and Arya are the same person, and last week’s stabbing was akin to Ed Norton shooting Tyler Durden in the head.

I mean…MAYBE? I think it’s much more likely that everything rounds back to the Braavosi acting troupe and Lady Crane, who we spent so much time with over two whole episodes. Lady Crane could supply Arya with everything she needed–fake blood, fancy costume, the ability to conduct a super secret exchange of gold in the world’s loudest stage whisper–to get the Waif to drop the Faceless Men’s time-tested false-face stealth, and into a brazen parkour contest across the city of Braavos. That’s a fight Arya wins ten times out of ten.

Which would not only be logical, but hilarious, as it proves a single day of learning “Yes And” at improv classes is more effective assassin training than whatever the hell the House of Black and White’s stick-to-the-face internship program is.

Exactly how many faces is Zombie Clegane about to smash?

Exactly? Tough to say. But there’s five Sparrows standing in Cersei’s way in the preview so my money is on at least five faces. But with Lady Olenna out of the city, Jaime off at Riverrun, and Tommen pal’ing around with the High Sparrow, I think Cersei’s mammoth pet is about to be fully let off the leash.

Look, this has been a long time coming. Ever since her walk of shame, Cersei has show super uncharacteristic restraint, choosing instead to bottle her anger up over eight episodes like a tea kettle with the face of Lena Headey (something I would buy). But now it’s therapy time for Cersei. Catharsis via zombie monster. Xanax in the form of an eight-foot-tall killing machine.

If nothing else, from this day forward I will be responding to most corporate emails with this GIF:

What can we expect from the Jaime-Brienne reunion?

“Should I fail to persuade the Blackfish to surrender, and if you attack the castle, honor compels me to fight you.” – Brienne of Tarth

“I love Cersei, and if I have to slaughter every Tully who ever lived to get back to her, that’s what I’ll do.” – Jaime Lannister

Awwwwww. These two. It’s just like old times, when Brienne was dragging Jaime across the country in chains and then Jaime got his hand cut off by forest outlaws. It’s fair to say some stuff has happened between now and then, the most important being Jaime’s haircut. Second most important being most of Jaime’s children are dead now. That haircut, though.

But some things never change. Brienne is still tirelessly working for a redheaded Stark woman. Jaime is still desperate to return to King’s Landing and his lady-love/sibling. Both of them are still all up in each other’s faces about who would win in a sword fight. I’m still over here like, “Yo kiss already.”

The biggest X-factor here is Brynden “Blackfish” Tully. Jaime needs him out of Riverrun and into Lannister custody and/or dead. Brienne also needs him out of Riverrun, but only because his band of roughly 1,000 soldiers would bring Jon and Sansa’s headcount up north to 1,062. It’s a contentious issue, sure to have a number of casualties, the first of which is maybe… 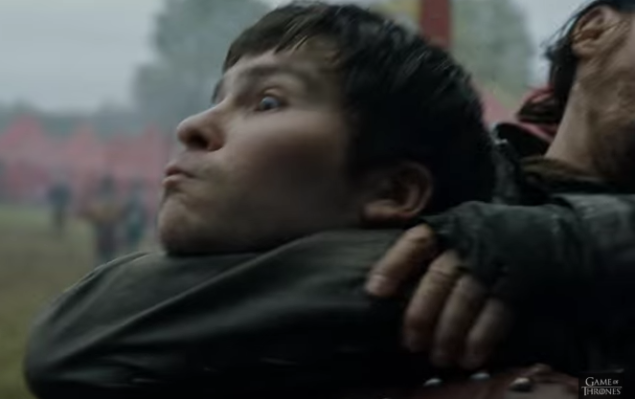 Pod is not okay. Pod is being strangled in the Frey camp, and not in the fun King’s Landing brothel way. What’s more, the culprit–based on one ear and a bit of hair–appears to be Bronn. I’m not saying Bronn has the Game of Thrones market for greasy, black hair cornered, but I know Bronn-stubble when I see it. I call it Bubble.

Either way, it shouldn’t be a surprise Bronn sneaks up on Pod from behind. He knows exactly how dangerous the squire is from the front.

How’s it looking for this random guy’s head? 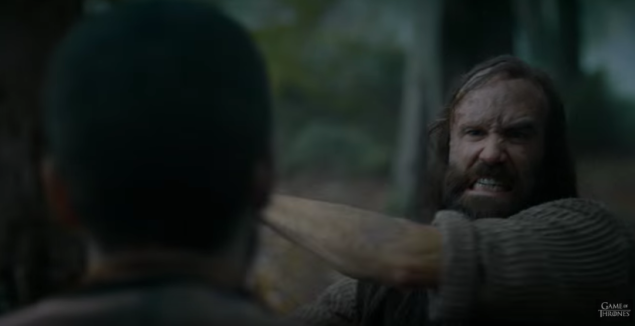 Not great, Bob. It appears that all the wood-chopping in the world couldn’t diminish Sandor Clegane’s passion for lopping dudes’ heads off with an axe.

It’s not exactly a surprise that The Hound jumps right back into the killing business because, as they say, business is booming. It’s who he’s killing right now that’s intriguing–The Brotherhood Without Banners, who last week executed the quietest slaughter in history a few feet away from Sandor. Last we saw them, they weren’t exactly moral or clean, but they definitely weren’t the type to pull an HBO and cancel Ian McShane for no reason.

There’s plenty of reasons for the Brotherhood to turn ruthless. Most of them are lame. One of them involves Catelyn Stark returning from the dead as Lady Stoneheart to enact sweet vengeance on the world. So, you know, we have options here. 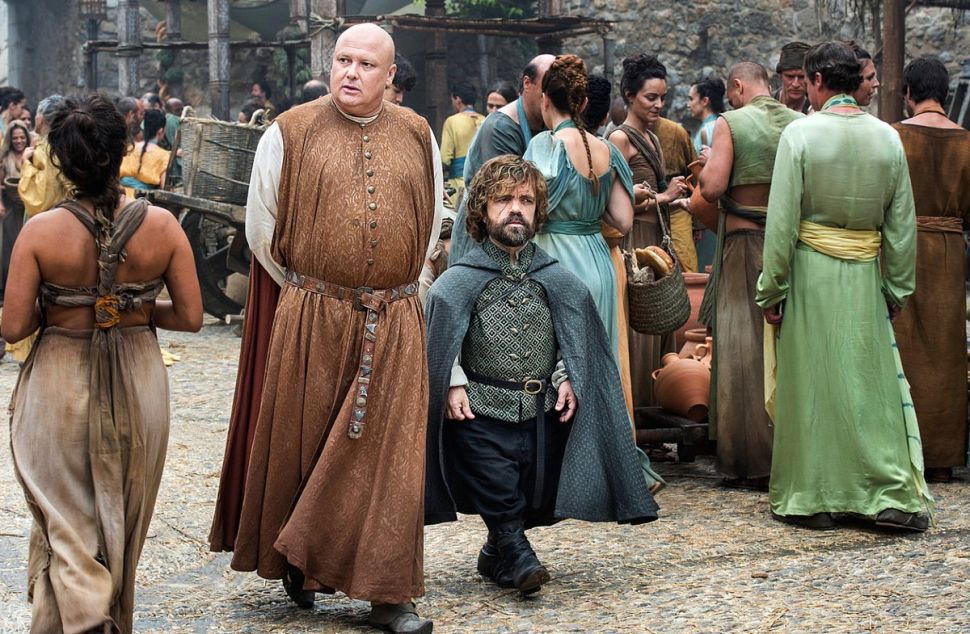