Most every type of animal, from pigeons to kangaroos, exhibits the same basic facial composition: a forehead, two eyes, a nose, a mouth, and a chin, in that order from the top of the face. But only one animal (aside from a few exceptional elephants and monkeys) can render its own face, and that’s us.

These days, it seems as if more and more contemporary artists, especially painters, are making the human face the cornerstone of their practices, and why not? It’s something that’s relatable to everyone and despite living in a world of amped up technology, we still mostly use our futuristic devices for taking selfies. But curiously, young painters today have become enamored with highly abstract faces—something that flies in the face (no pun intended) of our much ballyhooed selfie culture.

It’s known that humans were drawing faces as early as 25,000 B.C. Distinct portraits of individuals first appeared much later, in Greco-Roman funeral portraits dating from between 100 B.C. to 80 A.D.

Those paintings sought the closest possible likenesses to their subjects, as they were meant to be reminders of departed loved ones. But alongside portraits, early man learned to craft “idealized” faces, which were used to signify Gods or Goddesses. Conversely, distorted or hybridized faces were often used to describe demons and monsters.

Religion’s grip on art slowly began to wane after the Industrial Revolution, and once Modernism took hold, artists started applying idealized or distorted faces to other concepts. Irish-born figurative painter Francis Bacon, for instance, alluded to the psychology of sex and violence by obliterating his faces with beautiful smears and splashes of paint. In these “portraits,” Bacon frustrates our psychological need to understand the range of emotions a face conveys, which initiates a deeper reading of the artwork. By the late ’90s, painters like John Currin and Lisa Yuskavage had grown tired of regurgitated Abstract Expressionism and decided to bring back portraiture as symbolic satire. These works played with the abstraction of ideas—namely stereotypes or clichés—rather than just abstracted shapes, opening up a whole new arena of conceptual painting.

But by the mid-aughts, an abstract painter named Mark Grotjahn returned to investigating the abstracted visage, harkening back to early Modernists like Joan Miró, Jean Dubuffet, Paul Klee, and after that, the COBRA group of painters. In these works, Mr. Grotjahn confounded an underlying face image with an overabundance of linear paint skeins, creating abstractions that use visual phenomena to trigger psychological effects, much like those of Bacon’s portraits. But more importantly, this series of paintings enlist our brain’s desire to see a familiar pattern as a face despite only coincidental suggestions of that image, playing upon a psychological phenomenon known as pareidolia.

Mr. Grotjahn’s new works were both successful and influential, and after the economy recovered, abstracted face paintings began to flood into the art market from all corners. Eddie Peake, Heather Guertin, Robert Janitz, Jennie Jieun Lee, Brian Calvin, Austin Lee, Rashid Johnson and many other painters started to focus their practice on making suggested heads and/or faces, and it’s a trend that continues to gain momentum.

Two painters (and one sculptor/painter) with shows currently on view exemplify this trend: Jose Lerma and Denise Kupferschmidt at Halsey McKay Gallery in East Hampton and Lui Shtini at Kate Werble Gallery in the West Village. All three artists emphasize unusual surfaces and/or compositions as a means toward abstracting the people who occupy their art, but they all eschew identity in one way or another as, in my belief, a way of recapturing power via shrouded features, or in other words, using disguise to counter or deter our impetus to label something.

Mr. Shtini’s show “Jinn Skin” builds off of his great 2013 show “Face Paintings,” which was a group of portraits reduced to their essential shapes, colors and textures. But with “Jinn Skin,” the artist moves even further towards abstraction by using visual hyperbole as a way to ground emotion within structure may resemble a face. The Jinn that are referenced in the title of the show are Arabic mythological beings that have no visible presence but can unleash emotions into the human realm. As the location where we read visual cues about a person’s emotional state, “the face” makes sense as the form for these Jinn that unleash affecting emotions, much as real faces do. It also offers a uniform construct from which Mr. Shtini can improvise.

Some works, like Skin XII, have a distinct head-like portion, even alluding to hair and teeth with chunky and jagged paint marks, while others like Skin X, 2016, utilize smears and cuts in the paint to allude to the brain tissue behind the face, as well as primordial life forms that still dwells a mile beneath the ocean.

Mr. Shtini owns a variety of techniques with which to embellish his distorted shapes, and each of the twelve modestly sized works on panel in the show are manipulated differently. His thick yet restrained use of oil paint distinguishes the tactile qualities of the heads/faces, yet with the new work, Mr. Shtini pulls far enough away from what resembles a face that the paintings can wholly be seen as something else. They even go past the extreme facial distortions of Francis Bacon, into a realm where pedestrian likeness is almost completely averted.

While also highly abstract, the faces in Jose Lerma’s show “Huevolution” at Halsey McKay are much more of a conceptual exercise, albeit one that draws from historical facts and the languages surrounding them. Art history is a recurring theme in Mr. Lerma’s work, and it was the tradition of European portraiture, from the Renaissance to the Industrial revolution, that inspired the set of portraits in the show. These faces, each titled Potato Gave, are composite archetypes that tell a story through visual reference and word play. The “potato” referred to in the titles are seen in the bulbous and knobby noses that resemble the tubers that are famous for coming over from the New World via Christopher Columbus and, in a sense, revolutionizing food farming (while also letting Europe armies dominate far away lands because of this new-found sustenance). The Potato, called “papa” in Spanish slang (also short for father) and “gave” which also means Dio (God) puts an interesting spin on Mr. Lerma’s titles. The “potato gave” or “father God” both allude to first world Europe’s view of the rest of the globe as its birthright—a bounty that is theirs for the taking. The creamy icing-like paint used for the 17th century wig-like hair pins the historic medium of paint, and specifically portraiture, to the vicious conquest of unsuspecting people around the world—a loaded narrative that turns Mr. Lerma’s symbolic faces into much more than they seem at first.

In concert with these portraits, one finds a show of logo-like works by Denise Kupferschmidt titled “Studio.” These graphic icons (many of which include head- or profile-like forms) describe the human form as inanimately as possible. Heads echo a keyhole or a vase, cleverly turning forms often based on female curves back into figures. In the end, it’s a very effective gambit, especially when it comes to the heads, which signify our emotions to the world. In a sense, Ms. Kupferschmidt follows the lead of Mr. Grotjahn by daring the viewer to see something human in her highly abstract construct, but instead of overloading the viewer with information the way Mr. Grotjahn does, she reduces the image as much as possible—even draining the images and drawings of color—to create an inscrutable image that falls somewhere between person and object.

So what is behind this new brand of facial investigation? Emotion is a powerful force that’s often manipulated for nefarious purposes (advertising, political campaigns, etc.) and public image has become nothing short of a fiction meant to mislead. Perhaps artists want to hide the precious feelings that corporations spend millions of dollars to target with their marketing campaigns? After all, if faces give you away, there’s nothing to do but keep them under wraps. 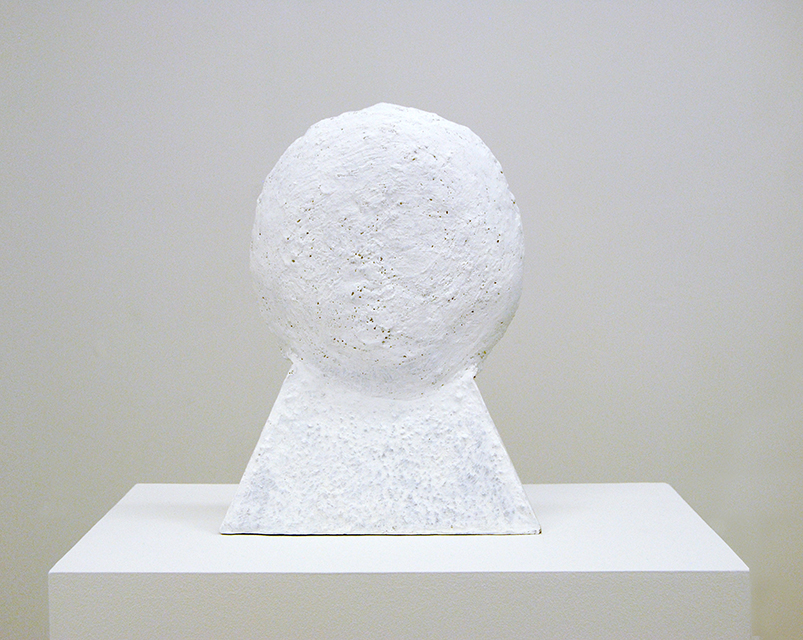