The Green Party, often cited as an alternative for disillusioned progressives, has been holding the Democratic Party accountable for years, with 2016 being no different. The Democratic Establishment’s coronation of Hillary Clinton came at the cost of disenfranchising millions of Bernie Sanders‘ supporters in the process, making the Green Party viable in the presidential election.

At the tail end of the Democratic primaries, new information came to light revealing Clinton’s defense regarding the FBI/DOJ criminal investigation into her private email server used as secretary of state, effectively debunking the defense she and her supporters have been rehearsing to the public for over a year. The State Department Inspector General reported in late May that Hillary Clinton broke Federal Records rules and never had authorization to use the server, yet the Democratic Party remains intent on propping Hillary Clinton up as their presidential candidate.

“The investigation should go forward,” Green Party presidential candidate Jill Stein told the Observer. “This is sort of typical Hillary Clinton; to do things that are not legal, to say that they are, and then try to cover them up. Hillary Clinton severely chastised other whistleblowers for using Internet channels that were not secure and yet she herself was doing that with private, high level state department information.”

‘If our vote is simply against what we fear most, then we are a ship lost at sea.’

Stein added there are several other transgressions throughout Hillary Clinton’s political record the public should know about preceding the general election in November. “It certainly includes what she was doing with the Clinton Foundation, taking money from other countries who were seeking various favors from the state department while she was in office.”

As the IBTimes reported in May 2015, foreign governments received surges in arms exports from the United States during Clinton’s service as Secretary of State, including dictatorships notorious for violating human rights—including Saudi Arabia, Qatar, Bahrain, UAE and Oman. The donations and increases in arms exports to controversial foreign governments is an extension of Clinton’s interventionist and reckless foreign policy exercised throughout her service with the State Department. “In war there is hardly a more horrifying example of the head-long plunge into reckless militarism than what Hillary Clinton led the way on in Libya,” Stein added.

Hillary Clinton’s unfavorable ratings are at record lows, with the average spread at negative 17.4 percent, according to RealClearPolitics. Despite Clinton effectively securing the Democratic presidential nomination with a victory in California, her favorability ratings have not shown improvements, attesting to the possibility of a third political party becoming viable in the upcoming general election.

“The most recent polls have us polling nationally at five percent. Where is this coming from? Because we certainly don’t have a big expense account for advertising and are not getting media coverage,” Stein said. For Bernie Sanders’ supporters, if Sanders chooses not to elect an independent bid there is still a campaign predicated on serving the interests of everyday people—of working and middle class Americans—that doesn’t accept money from Super-PACs, corporations, or lobbyists.

“In the words of Alice Walker, ‘the biggest way people give up power is by not knowing we have it to start with,” she said. “It is time to reject the propaganda that tells us we are powerless, to recognize we have the numbers here for a transformational political change and to stand up on our own behalf—not to use your vote as a weapon against yourself, but to use your vote to move us forward,” said Stein, referring to the emotional blackmail the Democratic Party has used to deter voters from supporting anyone who runs outside the Establishment.

“Democracy is not what we don’t want. Democracy is what we do want. It is a set of affirmative values by which we can move forward. If we cannot insert our values into our vote, and our vote is simply against what we fear most, then we are a ship lost at sea.” 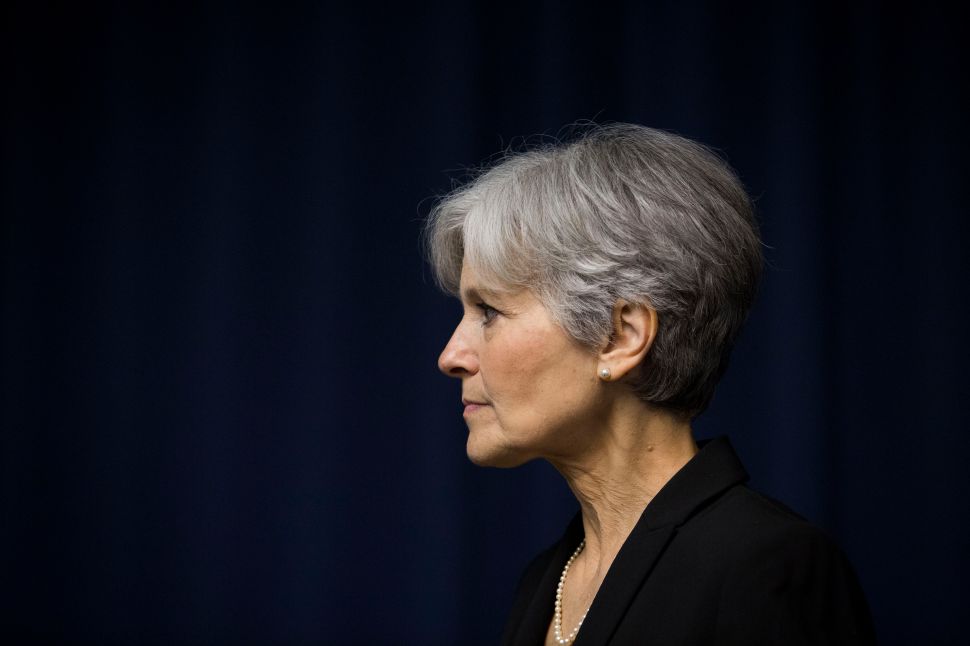