In the end, it all came back to New York.

Hillary Clinton feted her hard-fought Democratic primary victory over Vermont Sen. Bernie Sanders—and her becoming the first woman presidential nominee in American history—at a vast converted warehouse in the Brooklyn Navy Yard, joined by numerous pols and a moderate-sized group of supporters. From the glass doors in the back wall of the Duggal Greenhouse, you could see the 59th Street Bridge and the southern tip of Roosevelt Island, where the former first lady launched her bid for the White House a year ago.

A thin trickle of supporters came in through those doors as the sun waned, while volunteers and staffers stoked the growing crowd into chants of “Hillary, Hillary.” The few hundred people massed in front of the podium and in nearby bleachers cheered and fluttered campaign-supplied American flags as the public address system alternated between a cover band and news dispatches—and the enthusiasm reached a crescendo as the group performed Jay-Z’s ‘Empire State of Mind’ while CNN announced her victory in neighboring New Jersey.

“This is her base,” City Council Speaker Melissa Mark-Viverito, an avid backer and surrogate for the ex-secretary of state, told the Observer. “That we can be here in this moment with her and celebrate, means a lot to me personally and to everybody in this room and beyond.”

“I’m confident Hillary will be president,” Ms. Brewer said, adding that Ms. Clinton’s credentials were as important as her gender. “It’s not just a woman, it’s someone who has more qualifications maybe than any man has ever had.”

The candidate took the stage after a film strip on feminism, highlighting the upstate 1848 Seneca Falls convention and the work of the late Brooklyn Congresswoman Shirley Chisholm, who became the first woman and first African-American to run for Democratic presidential nomination in 1972. A shriek of feedback echoed the shouts from the audience as Ms. Clinton began to speak.

“It is wonderful to be back in Brooklyn,” she said. “Thanks to you, we’ve reached a milestone.”

Ms. Clinton has kept her campaign headquarters in Brooklyn from the outset of the campaign, but there was an unavoidable symbolism to celebrating her triumph in the borough of her opponent’s birth—and in a new high-end venue that replaced an older industrial space that employed the kind of blue-collar workers Mr. Sanders grew up around. And it was the Empire State, where she served as senator and still resides, that gave her a 16-point victory in April that made it clear her advantage in the primary would prove insurmountable.

“I want to congratulate Senator Sanders for the extraordinary campaign he has run,” she said, calling the often heated contest “very good for the Democratic Party and for America.”

Today also marked the exact eight-year anniversary of Ms. Clinton’s suspension of her 2008 campaign, which allowed then-Sen. Barack Obama go on to claim the White House. So far, though, Mr. Sanders has not yet been so charitable—and has vowed to fight all the way to the convention next month. The underdog independent-turned-Democrat has yoked his hopes to California, hoping a victory there tonight would convince hundreds of superdelegates to defect from the frontrunner and presumptive nominee.

The Associated Press called the primary for Ms. Clinton Monday night, as a victory in Puerto Rico in Sunday and the endorsement of 571 superdelegates lifted her over the threshold to victory. She padded her lead tonight with wins in the Garden State, South Dakota and New Mexico.

New York, too, gave birth to the Republican nominee—Donald Trump, the Queens-born businessman who made his name in Manhattan real estate. Despite having captured his party’s nomination last month, he held a simultaneous celebration tonight in Westchester.

Ms. Clinton tore into Mr. Trump, asserting that he wanted to “take America backward,” and mocking his flagship promise to construct a barrier along the Mexican border.

The White House announced shortly after the speech that Mr. Obama had called both Ms. Clinton and Mr. Sanders and “congratulated” them both on their “inspiring campaigns.”

Updated to reflect Ms. Clinton’s victory in South Dakota, and to include comment from the White House and Ms. Brewer. 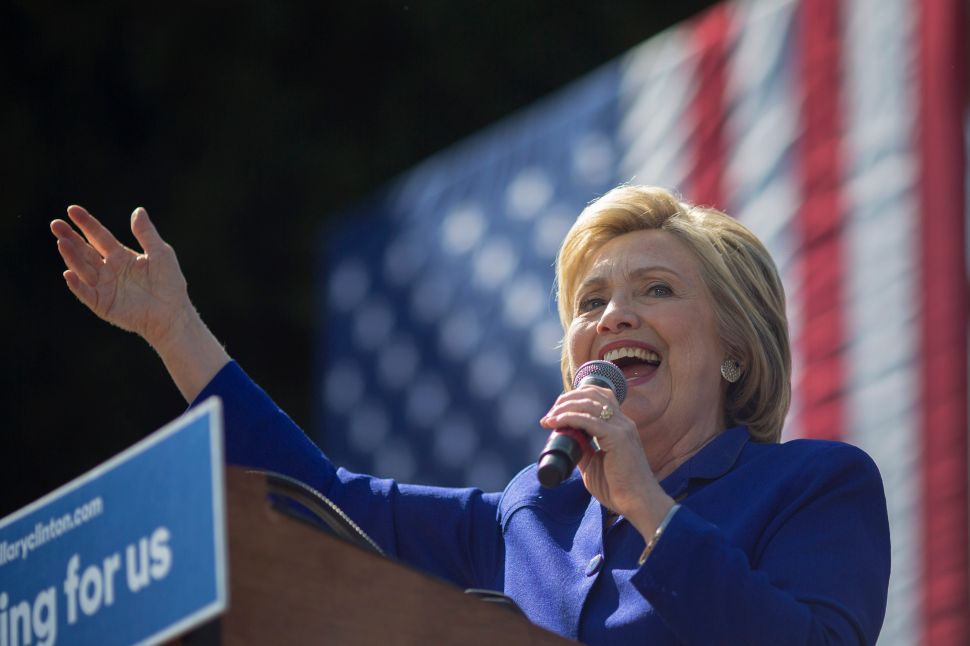