I try to minimize election predictions—especially long before the voting on election day—but I consider this prediction one of the easiest I have ever made.

Hillary Clinton will win by a landslide against Donald Trump. I expect her to win 46 states, and if I am wrong, it is equally likely she will win more than 46 states in November, rather than less.

FBI Director James Comey will announce that he is not recommending a criminal prosecution in the Clinton email case, which will give her a tremendous boost. To understand the full magnitude of Clinton’s coming victory consider the news over the last week, which is a sneak preview of the future.

After Trump attacked the judge in the case against him about Trump University, falsely saying the judge is a “Mexican” in terms that even some conservatives and Republicans condemned as racist, virtually every senior Republican across the landscape of the national GOP harshly criticized Trump’s attacking the judge.

At one point the lead story on the front page of The New York Times quoted prominent authorities on justice and law, including several who are staunch Republicans and conservatives, worrying that the election Trump could literally pose a threat to the rule of law and the constitutional separation of powers.

Clinton responded with outrage and with a strong and sustained political attack against Trump that was universally bannered in the media, which rallied Democrats and appealed to independents who will be crucial in November.

While Clinton was on the offensive over Trump’s attacks on the judge and Trump University, the news was full of interviews with former customers of Trump University who claimed they were defrauded and former employees who publicly charged that they were put under pressure to engage in unethical business practices and decided to resign.

I am not judging which party should or will prevail in the Trump University case. That is for the court to decide based on the evidence. The Trump camp has produced favorable reviews by other customers of Trump University, and at some point, probably after the election, the court will decide the ultimate outcome of the case, as other courts will decide the outcome of similar cases.

Whether Trump University did anything wrong—and I am offering no opinion about this—the political problem for Trump and Republicans will be that between now and election day there will be more stories in all media about Trump University customers and employees charging fraud.

While Clinton has at times taken some heat from reporters who believe she has not made herself as open and accessible to them as they would like, Trump’s all-out attacks against the media—which were reminiscent of a former vice president named Spiro Agnew—were offensive to virtually all professional members of the media.

Republican House Speaker Paul Ryan was highly embarrassed when, after announcing his support for Trump, he was forced to spend the next several days harshly criticizing the GOP nominee he had just announced his support for.

Republican Senate Majority Leader Mitch McConnell, whose GOP majority is threatened by strong prospects of a Democratic takeover, was forced to criticize Trump repeatedly over the weekend as his Senate Republican candidates were forced by local media to either defend Trump, or in most cases, join senior Republicans in deploring his comments.

Clinton continued her attack throughout this period while the free media, reporting on events, gave her ammunition for her offensive while Republicans were running for cover as Trump kept doubling down on his name-calling.

There are several main factors contributing to the high likelihood of a Clinton landslide in November.

The former first lady, United States senator and secretary of state begins with a huge advantage in qualifications for the presidency. She has a worldwide stature and credibility at home and internationally as a highly qualified candidate for the presidency.

At the very moment Trump achieved the status of presumptive nominee, which guaranteed a much higher degree of scrutiny and a much greater need for him to establish his presidential-calibre bona fides, he continued his practice of insulting and berating many Republicans as well as Democrats and then began insulting and berating many in the media who will be reporting on whether Trump is qualified to be president, or not!

As a result, the enormous advantage Clinton possesses in presidential qualifications and stature in the eyes of voters and the press grew even wider with every new insult Trump offers, and doubles down on, day after day.

Because of the insulting and divisive style of the Trump campaign, the Democratic electoral advantage will be even greater than previous presidential elections. The prospect of a Trump presidency will galvanize Democratic voters to come out in huge numbers, generate a wave of anti-Trump Hispanic voters that could win key states for Democrats in both the presidential and senate elections and alienate and alarm many female, independent and younger voters.

During the last week voters witnessed Clinton launching and escalating her attack, Trump put on the defensive and repeating his controversial insults against the judge and the media, while leading Republicans either ran for cover or ran to the television cameras to denounce the latest insult from Trump.

Anything is possible in presidential politics, but things are shaping up to produce a Democratic landslide for Hillary Clinton similar to the landslide of Lyndon Johnson over Barry Goldwater in 1964. 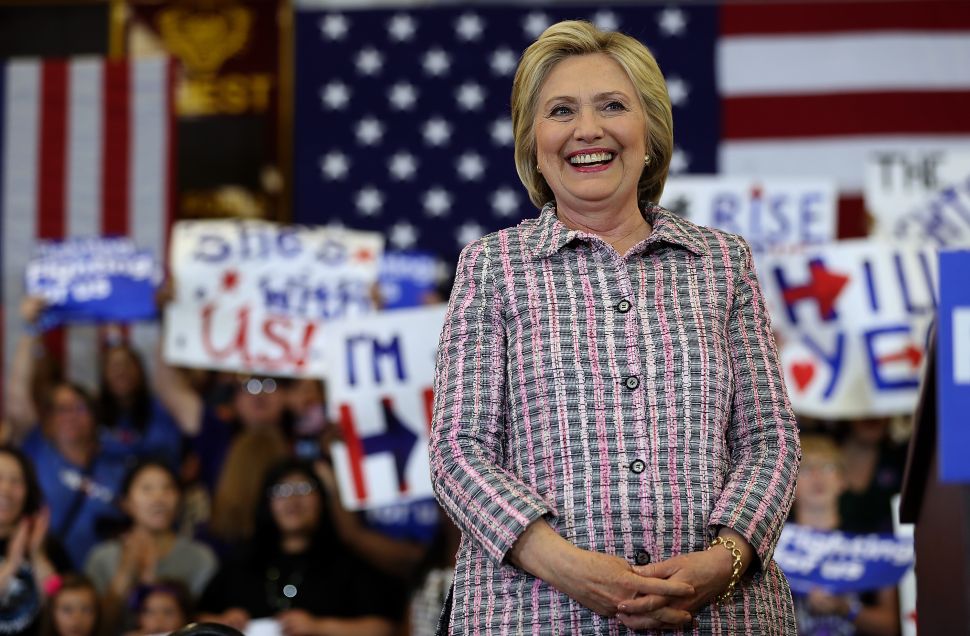