Many people have been asking me to write about this topic for a while. I’m fairly new to the whole speaking and giving talks kinda thing. But within the last two years I’ve stood on many stages around the world giving 30+ talks in more than 25 cities. I’m only counting the talks since the last 2-3 years, because those are the only ones I gave in English, my second language.

Now that doesn’t make me an expert at giving talks, but there are a couple things I learned during this time.

This article is for those who want to give more talks. It’s for those who also read countless useless advice on “How to give a perfect talk” only to find out that they’re now more nervous than before.

I’m often being asked if I enjoy public speaking. My reply usually is: “If you enjoy the feeling of potentially shitting your pants out of excitement days before an event, then YES”.

“There are only two types of speakers in the world. 1. The nervous and 2. Liars.” —Mark Twain

More people on this planet are afraid of speaking in front of a crowd than they are of death. Well, at least according to a study where people are being asked to list the things they are most afraid of. On Nr.1 we find “Public Speaking” far ahead of the fear of heights, spiders, financial problems and of course death.

I have a huge fear of public speaking. I don’t even like to speak up in a meeting room with just over 10 people in it. It makes me cringe, I can feel the silent judgment and my stomach goes all gaga like I’m being chased by  an ostrich. And there is nothing that freaks me out more than an ostrich, please never use one against me. We’re in the trust tree here! Super promise!

So when I started being asked to give talks in front of crowds I began to freak out and soak up all the public speaking advise I could find online. By the end, I was even more nervous. Most “How to give a talk” advise is bullshit because they tell you about all the things you should NOT do. Don’t do this with your hands, don’t stand still, don’t look weird. Small thing’s that actually don’t matter, but someone who’s already nervous enough will of course obsess over them.

So let’s talk about my main take aways from giving talks the last couple years and seeing hundreds of others:

1. Answer this question before you start giving your first talk:

I’m one of those people in the second group. It freaks the fuck out of me when there is someone I know really well in the audience. I don’t know why, but nervousness level is up 10000%. I appreciate an audience full of strangers, ideally in a different city. Maybe because I always tell myself that when I fuck up I’m like “whatevaaa I don’t live here anyway lol bye”

But seriously. When giving your first sets of talks, it’s important to understand what group you belong to. If you feel more relaxed with relatives in the audience, try to have them come to your first couple talks. If you’re like me, try at least to not have your mother in the audience for the first time. Practice with strangers.

There is one big misunderstanding when giving talks. Most people think they need to be smart, show a lot of data, share knowledge and bore the crap out of the audience. We think that we need something “worth showing”. But you know what? If I want to learn something new, I read a book, but I go to a talk to get entertained. (unless it’s TED)

If your talk is entertaining, no one gives a shit about what you talked about. You can be at the fanciest developer conference where people may expect live coding responsive frameworks (lol). But even there, if you manage to entertain and make people laugh, no one will even notice what you just did.

I’ve always been stressed out about showing a lot of complicated stuff in my presentations. Showing how talented I am, look at my grids, look at this list of buzzwords, look at this piece of code. But ultimately, no one really cares. If I want to see your work, I go online and look at your portfolio. But at an event, I want to be entertained, even if that just means you’re doing stand up comedy.

My point is: You don’t have to appear super smart, you just need to make people have a good time and laugh. Everything else is a bonus.

PS: Most talks are boring, knowing this little thing saved my ass many times. I’ve been completely “off topic” at a lot of conferences, but I’ve been told the audience always appreciated my talk because it felt like I gave them a break between the serious stuff. Be that break, be that person that makes the audience relief, because they’ve been sitting for hours and all they can think of is going to the toilet.

“There are always three speeches, for every one you actually gave. The one you practiced, the one you gave, and the one you wish you gave.” —Dale Carnegie

Do everyone a favor and keep your talk short. As we all know, people nowadays have an attention span of a squirrel. 1h talks are way too long. 40min is stretching it. 30min is optimal. 20min is just perfect.

If you can give a talk, make it short and snappy. You want people to say “Oh no, it’s over already? That was awesome! I WANT MORE!” – If you get that, you won.

4. Start with a joke

This is my little secret. When you enter the stage, everyone is starring at you. Everyone is thinking: “DO IT! ENTERTAIN ME! SLAVE!”. And I’m just standing there, blinded by the stage light, looking into the black void of audience.

Then, I start with a joke. Maybe something from my childhood. Maybe something related to the event, maybe just something embarrassing about myself. Then everyone laughs, then I laugh. Now we’re on! The audience is warmed up, my stage fright just disappeared by 80% and I’m ready to get started.

The hardest thing about giving a talk is the beginning. It’s the long stretch until you get a little bit of response and feedback from the audience. When telling a joke straight from the beginning you’re not only setting the mood, but also you get the feedback you need.

There are a few things that make me help cut some of my nervousness right before I give a talk.

a.) Always know where the bathroom is at the event venue. If you’re like me, you need it right before.

b.) About 10min before the talk, I usually go somewhere private and do the super hero pose. Yes, I do that kinda shit. Essentially, you just go somewhere, and you pretend you just won an award with your hands high up in the air. This pose helps A LOT. I’m usually cramped up right before a talk, so this pose helps me to loosen up.

c. ) Always ask for a headset microphone, not the one you have to hold. There are so many things you can fuck up if you have to worry about holding your microphone, I prefer just not worrying about this at all.

d.) Arrive a little earlier at the event and socialize a bit with the people who will end up sitting in the audience. The moment you give your talk, they’re not complete strangers anymore and they can serve as your eye contact anchor in the audience once you’re on stage.

I’ve written about this already a couple weeks ago. When it comes to giving a talk, there are a few things you have to do right, and there are few things you can do wrong. But there is only one thing you need to nail: Create value by either being useful, or by giving people a good time. Find this one thing you will leave people with, whatever it might be.

I also let you in on a little secret: If you are standing on stage, you’re essentially telling the truth. You will be quoted, photographed and your every word will be taken as if it’s the smartest thing you’ve ever said. You can basically say whatever you want, as long as you do it with confidence and people will clap their hands. Knowing this gives you a lot of advantages, because it might help you with the little boost of confidence you need. But the fact that you’re on stage, already says a lot.

I do hope that some of the above tips & tricks will help you give the talk you always wanted to give. This might be in front of a conference audience, or maybe just presenting in front of a client.

And in case you are interested, I can write another future article about how to prepare a and structure a good talk. If that’s something you’re interested in, send me a gif on Twitter. (because I know you want to share that favorite gif of yours with me)

PS: Of course, if you know someone in need who is about to give a talk and super nervous about it, forward them this article.

Tobias is the Co-Founder of Semplice, a new portfolio platform for designers. Also host of the show NTMY — Previously Design Lead at Spotify & Board of Directors AIGA New York. If you enjoyed this article please let him know on Twitter @vanschneider. 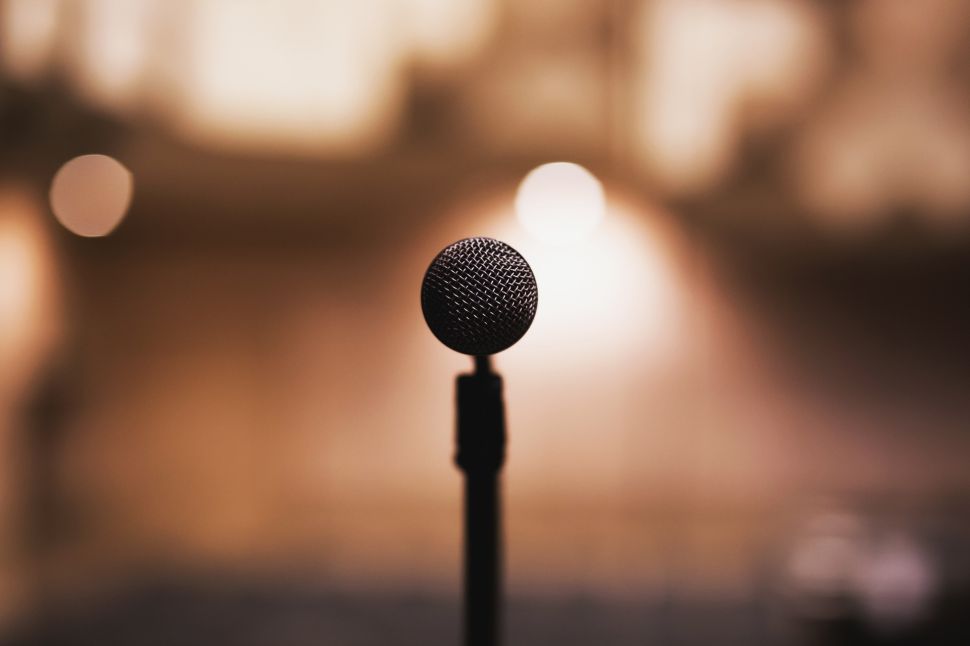