1988 was a very special year, dear readers. Why, you might ask? Besides the fact that it was the year the Soviet Union began to collapse, and NWA released the influential record Straight Outta Compton, it was also the year that presumptive Republican presidential candidate Donald Trump released his book Trump: The Art of the Deal. Meanwhile, the art world’s favorite plate smasher Julian Schnabel released also released a memoir: CVJ: Nicknames of Maitre D’s and Other Excerpts from Life. It was a very good year.

Spy magazine writer Bruce Handy brilliantly noticed that the two men had more in common than just book deals, and decided to parse their memoirs/self-help guides for some choice quotes, which he presented in the publication’s April 1988 “Nice Issue,” in an article titled “Egos A-Go-Go.” The piece is an enlightening game of “whose ego is bigger?” wherein the two men share their most narcissistic thoughts on death, the sublime and bad behavior. And I have to give it up to Handy here, for he has done God’s work, tallying the average number of times Trump and Schnabel refer to themselves in the first person per page in their respective tomes. (Schnabel: 15.3 and Trump: 21.2, for the record.)

Here, my favorite quotes from each book via this archival gem, bearing in mind that in 2016 Julian Schnabel continues to wear pajamas in public regularly.

Schnabel: I paint paintings because I can’t get the experience in any other way but there are many more experiences that are equally satisfying to me and equally inept at answering all my questions, but hover in exactitude in describing themselves and defying me to define their logic.

Trump: I do it to do it. Deals are my art form….I like making deals, preferably big deals. That’s how I get my kicks.

Schnabel: I saw a Van Gogh drawing of his girlfriend’s mother in her backyard….It made me feel like I was standing on Houston Street in late November, when the temperature has just changed; I don’t have a scarf and a friend has canceled a dinner appointment with me. I have nowhere to go. I feel the air go through me. I have a sense of my own twilight.

Trump: I now have in my will a clause describing the importance of that restrictive covenant [preventing Hyatt Hotels from opening a hotel in New York that would compete with the Trump-built Grand Hyatt], just on the chance one of my heirs happens not to be that smart.

“BOYS WILL BE BOYS”

Schnabel: [While visiting a seedy Mexican town on a whoring trip] Red [a friend] received a baptism from a bucket of douche thrown in his face through his car window. We thought it was real funny.

Trump: In the second grade…I punched my music teacher because I didn’t think he knew anything about music…I’m not proud of that, but it’s clear evidence that even early on I had a tendency to stand up and make my opinions known in a very forceful way.

Schnabel: For me art isn’t about self-expressionism.

What did we learn kids? Some stray thoughts:

— Schnabel is a poet.
— He also has a strange grasp on weather patterns in the Northeast, because by late November in New York he should definitely have been wearing a scarf.
— Ned Stark should have taken a page out of Trump’s book on protecting assets, and written into his will the importance of why a Stark must always be in Winterfell. Because foresight goes a long way.
—Does anyone really change? Like, truly change?

Spy magazine’s original article “Egos A-Go-Go” can be read in its entirety on Google Books. 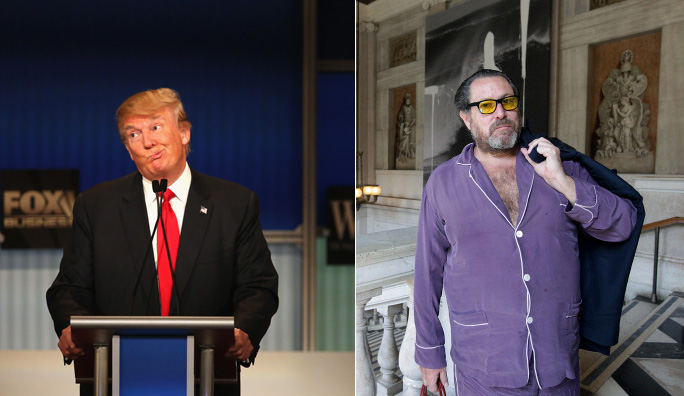