The stakes for the most recent of New Jersey’s few competitive legislative districts became clear this week as freshman Assembly members Joanne Downey and Eric Houghtaling (both D-11) unveiled their sponsorship of a plan to fully fund the state’s public schools. The move reveals one strategy by which state Democrats will combat blowback from a likely gas tax increase when voters go to the polls in 2017, and offers an early glimpse of the pointed attacks likely to fly between the eleventh district’s new lawmakers and incumbent state Senator Jennifer Beck (R-11).

Beck lost two running mates when Downey and Houghtaling defeated Republicans Caroline Casagrande and Mary Pat Angelini in 2015 in that cycle’s biggest upset. With the district now split, Beck has made her opposition to funding the depleted Transportation Trust Fund the cornerstone of her reelection bid’s earliest days.

Though Downey and Houghtaling have declined to offer a firm position on the gas tax increase, their sponsorship of a new school funding bill could give them an out if it passes, proves unpopular, and leaves Democrats in contested districts on the defensive.

As of the 2015 election, the district broke down as 27 percent Democratic, 20 percent Republican and 53 percent unaffiliated according to the New Jersey Department of State.

Holding a rally in Tinton Falls earlier this week, Beck came out hard against the tax hike and argued for her own alternative plan to fully fund repairs, maintenance, and new construction for the state’s transportation infrastructure with agency mergers and cuts to certain state employees’ health benefits. Democrats are calling for raising the state’s 14.5 percent tax to 20 percent, and propose increasing the Trust Fund from $1.6 billion to $2 billion.

“We’ve already had thousands of people sign our ‘No Gas Tax Increase’ petition online, but we need to do more to demonstrate the massive opposition to higher gas taxes,” Beck said Monday. “Many who live along and commute on the Garden State Parkway will be hit especially hard. If you oppose paying hundreds a year more at the pump, I urge you to contact the legislative leadership in Trenton and make your voice heard loud and clear.”

Meanwhile, Beck’s Assembly counterparts unveiled their first major policy initiative after a quiet first few months in the lower house. Apart from a measured statement opposing their caucus’ $15 minimum wage effort, the two had kept silent until closing in on another of Beck’s signature issues Thursday. Beck has repeatedly argued for changes to the way the state portions out school aid along with Assemblymen Declan O’Scanlon (R-13) and Jack Ciatarelli (R-16), and called for top-down changes to the school funding formula.

“It’s very much a crisis situation at this point,” Downey said. “For a matter as important as protecting the educational rights of our state’s students, we don’t have room for politics or gamesmanship. That’s why we aim to take the politics out of school altogether with this particular legislation.”

Yet their sponsorship for the bill, if it is successful, would give them an opening against Beck, who has railed against inadequate funding for schools in those same districts. If Democrats broker a hard-won trade-off with Republican Governor Chris Christie and raise the gas tax in exchange for a five-year phase-out of New Jersey’s estate tax, the LD11 Democrats will have an ace up their sleeve in being able to say that they sought property tax relief for constituents by fighting for more state aid to district schools.

Sweeney, primary sponsor of the school funding bill and himself expected to mount a gubernatorial campaign when Downey and Houghtaling go up for reelection, could also be making an overture to Monmouth County Democratic chairman Vin Gopal. One of the lingering questions after their 2015 upset was to whom Downey and Houghtaling would turn for support, but the two now seem most likely to serve as a bridge between North and South.

That outcome would be mutually beneficial for the Senate President and Beck’s Democratic district mates. Pairing himself with Downey and Houghtaling on the school funding issue could be a bid for the line in Monmouth County when Sweeney goes up against North Jersey rivals Steve Fulop and Phil Murphy in the primary.

The TTF faces insolvency this summer, and the outcome will depend on lawmakers’ willingness to accept an estate tax phase-out sponsored by Senator Paul Sarlo (D-36). Regardless of how and when the Trust Fund becomes fully funded, the eleventh district will be the proving ground for each party’s strategy in the aftermath. 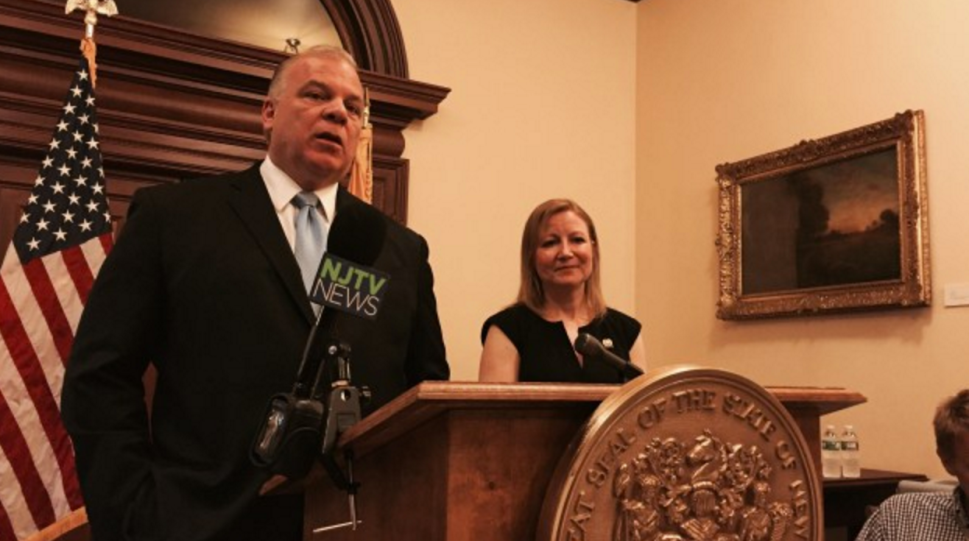