CLIFTON – It was standing room only at the Palestinian American Community Center (PACC) in Clifton on Thursday as  members of New Jersey’s thriving Arab American community came out to support the presidential candidate many in the community feel best represents their interests: Vermont Senator Bernie Sanders.

The event—organized by Arab Americans for Bernie Sanders—brought together Arab leaders to advocate about why community members should head to the polls on Tuesday June 7 to cast ballots in the primary for Sanders rather than his Democratic competition former Secretary of State Hillary Clinton. Speakers included Brooklyn activist and Bernie Sanders delegate Linda Sarsour, Michigan comedian/Sanders surrogate Amer Zahr and Jim Zogby founder of Arab American institute who called in by phone. Zogby is an ardent Palestine supporter who Sanders has enlisted to help write the Democratic Party’s platform.

According to Zogby, it is Sanders’ stance on Palestine that sets him apart from Clinton.

“This is the first presidential candidate since [Jesse] Jackson in 1988 that has made a point of advocating justice for Palestine and not just a two-state solution that everyone talks about. He talked about compassion,” Zogby said of Sanders. “We now have a chance to support a presidential candidate who not only advocates for our issues but has gone out on a limb. We have the power to be a decisive power for him.”

For Sarsour, Sanders is the first candidate that has given Arab Americans the opportunity to become a meaningful part of the political debate.

“I never really thought that there was a candidate who reflected my values,” Sarsour said. “Bernie Sanders chose to put someone like me, a woman in a hijab, a woman attacked by Islamiphobes, and Bernie Sanders put me in front of his campaign. I believe in a man who is giving us a chance to engage in his campaign… who allows us, sisters and brothers, the become part of the conversation.”

Zahr said that he believes Arab Americans will be an influential voting block in helping carry Sanders to victory. He cited the unexpected victory in Michigan as an example of what Arabs can do when motivated.

“In Michigan 1.2 million people voted in the democratic primary. Bernie Sanders won by 20,000 votes,” Zahr said. “If you have ever been to Dearborn, that is about two neighborhoods. What does that mean? It means that Arab Americans won Michigan for Bernie Sanders.”

According to Zahr, the Sanders campaign envelops people from all different ethnic groups and crosses cultural barriers. He cited the fact that Sanders, if elected, would be the first Jewish president of the United States. But, despite ongoing tensions in Israel and Palestine, Sanders has spoken about “respect and dignity” for the Palestinian people.

According to Zahr, many Arabs including himself are unlikely to switch their votes to Clinton if she becomes the eventual nominee. He cited her record in Middle Eastern countries including Libya and Syria as reasons why he “morally can’t” vote for her.

“We cannot have a president anymore who bombs our countries all the time,” Zahr said.

While the speakers recognized Clinton’s strength in New Jersey, they still encouraged event attendees to turn out and vote on Tuesday for Sanders. They said that, even if Clinton wins New Jersey, it is critical for Sanders to have significant delegate representation at the Democratic National Convention in Philadelphia in July.

Though the event skewed heavily toward Sanders, not everyone was there to speak about the Vermont senator. Al Abdelaziz recently lost a city council election in Paterson’s 6th ward, one of the most heavily Arab populations in the nation. While Abdelaziz is supporting Clinton, the Palestinian American came to the Bernie event to encourage voters to cast their ballots for the Passaic County candidates for freeholder, surrogate, and sheriff rather than for the two freeholder candidates whose names will appear under Sanders on Tuesday.

“Regardless if it is Bernie of Hillary, we have the county Democratic candidates who we have to make sure we get elected,” Abdelaziz said. “I just want to advocate for the people who have been supportive of our community in this election.”

According to Sarsour, this election is a milestone for Arab Americans.

“When our community stands up, when we organize, when we mobilize, when we take our legacy to the polls guess what happens? We win,” she said.

While the event was held at PACC, the organization is not supporting any particular candidate for president. The two Democratic presidential candidates will face off at the polls on Tuesday. While some are saying that Clinton will lock up the nomination (counting superdelegates) after New Jersey, Sanders and his supporters say they will continue onward to the July convention.

“He can win the nomination, don’t let anyone tell you anything different,” Zahr said. 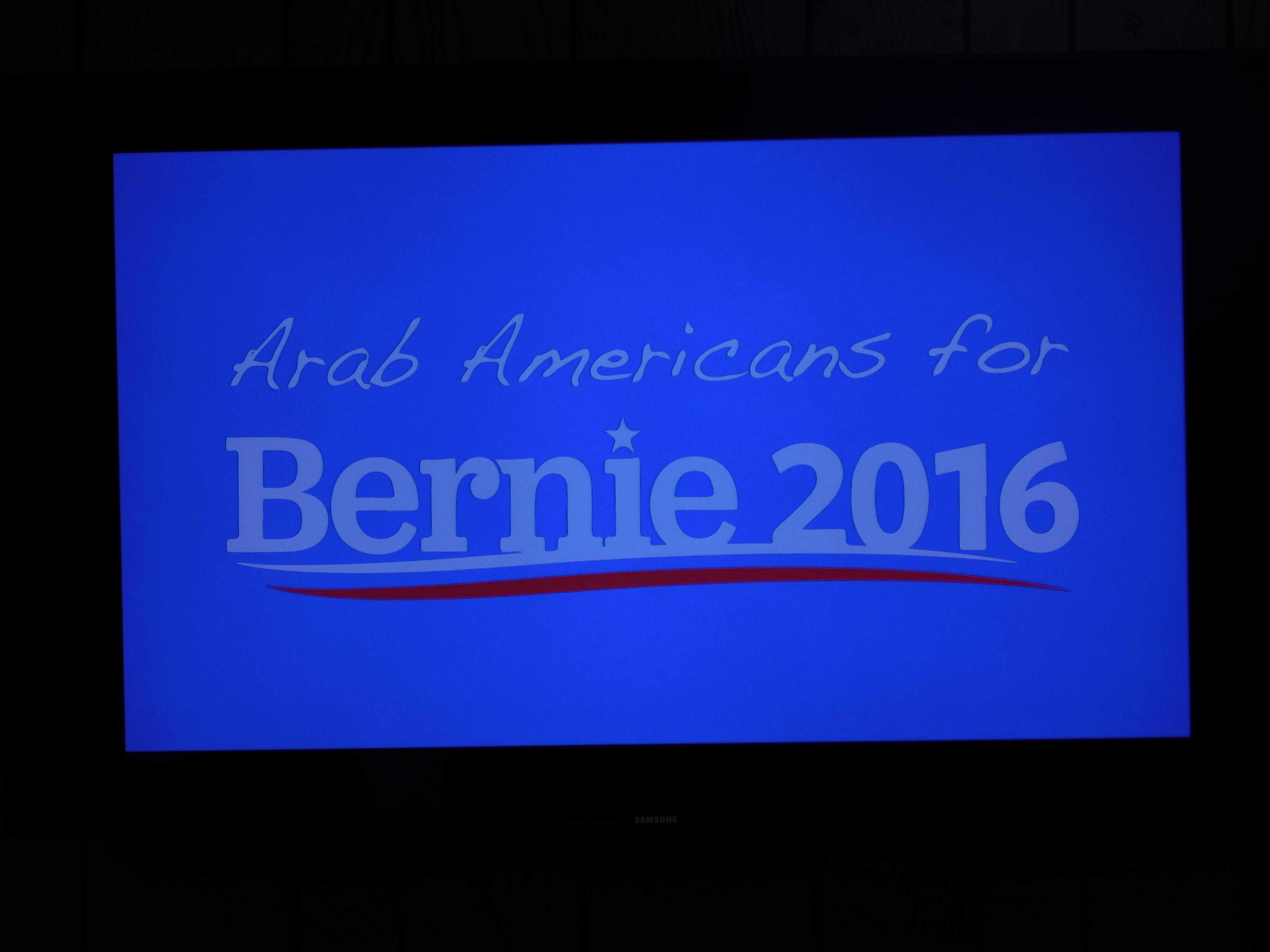 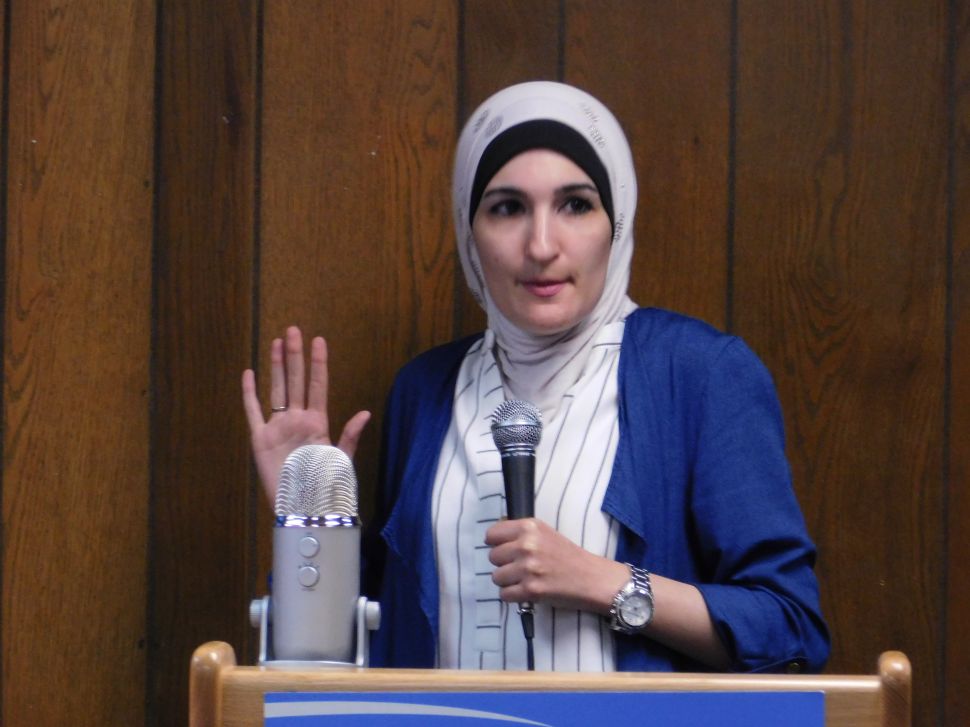