Charles Dickens didn’t just have a great mind, he had great calves as well.

On any given day, Dickens averaged 12+ miles of walking through the lush Kent countryside or the bustling streets of Victorian London.

One particularly dreary night in October of 1857, Dickens set out to escape his increasingly disharmonious marriage, walking from his home in Central London to his house in Kent—a 30-mile trip that would eventually be repeated (in reverse) by his character Pip in Great Expectations. In fact, many moments from Dickens’ solitary walks later ended up as fodder for his work.

“There are details in Dickens’ descriptions—a window, or a railing, or the keyhole of a door—which he endows with demoniac life. The things seem more actual than things really are,” explains critic G.K Chesterton in Charles Dickens: A Critical Study.

Like Dickens’ walks, studies and anecdotes alike describe the creative virtues of spending time alone and inside your own mind: solitary work, being in nature, daydreaming.

But what is it that happens when we allow our minds to dive deep into our subconscious? And how does it help us break through creative blocks?

Is being alone the key to creativity?

Just what makes us ‘creative’?

Back in the 1960s, psychologist and pioneering creativity researcher Frank X. Barron brought together a group of the eras most high-profile creators including writers Truman Capote, William Carlos Williams, and Frank O’Connor, as well as leading architects, scientists, entrepreneurs, and mathematicians, to see if he could determine a common trait across creative individuals no matter their speciality.

What Barron found was that the most creative thinkers all exhibited certain common traits: an openness to one’s inner life; a preference for ambiguity and complexity; an unusually high tolerance for disorder and disarray (and vodka and orange juice if we’re talking about Capote); and the ability to extract order from chaos.

Describing the cluster of traits that he observed, Barron put forth that the creative genius was: “both more primitive and more cultured, more destructive and more constructive, occasionally crazier and yet adamantly saner, than the average person.”

80 years later, leading creativity researcher and the father of ‘flow’ Mihaly Csikszentmihalyi would sum up the creative individual in a similar fashion:

While Barron’s studies were one of the first to show the sheer complexity of creative thinking from a behavioral standpoint, it’s now almost a given that there is no one key trait that defines creativity.

Inside your creative mind

Years after Barron’s studies, technology and research would further support his observations.

Far from the ‘right-brain/left-brain’ myth, these days, most neuroscientists agree that activating our ‘creative mode’ involves different interacting cognitive processes (both conscious and unconscious) as well as our emotions.

In fact, while we still don’t know exactly how creativity and the brain work together, we do know that any time we’re tasked with a creative problem, parts from all over our brain are activated.

Getting more specific, there are three main ‘networks’ of brain functions that we know are used for creative tasks:

Seeing these networks in action allows us to understand which ones are used more during different parts of the creative process. And while we still don’t know exactly how it all works together, we’re getting closer.

In a recent article in Frontiers in Human Neuroscience, researcher Rex Jung and his colleagues concluded that when you want to loosen associations, let your mind wander freely, imagine new possibilities, and silent the inner critic (aka, get creative and come up with interesting and novel ideas), it’s good to reduce the activation of the Executive Attention Network and increase the Imagination and Salience Networks.

In other words, you want to block out the external world and retreat inwards.

Even more recent research on jazz musicians and rappers shows this is exactly what happens while improvising. Our creativity flourishes from mental isolation.

How isolation is tied to idea incubation

From a social, cultural, and scientific standpoint, creativity seems to come more freely when we’re able to utilize the parts of our brain that are less connected to reality and more free flowing in nature.

And I’m sure this is something we can all agree on. We’ve all felt that shock of sudden enlightenment when our brain wanders. But how does this work into the creative process as a whole?

Back in 1926, English social psychologist and London College of Economics co-founder Graham Wallas published The Art of Thought—one of the first attempts to define how the creative process works.

Since Wallas, researchers, psychologists, and thinkers of all kinds have put for their own ideas of what creativity entails. Yet in every single one, there is a huge emphasis placed on the period of ‘incubation’—of time spent alone, letting your thoughts wander and random ideas coalesce.

60 years ago, psychoanalysts theorized that one of the hallmarks of creativity was ‘the ability to regress into the unconscious while still maintaining conscious ego controls.’ While back in the 70s, Csikszentmihalyi suggested that creative individuals ‘tend to be strong on certain traits, such as introversion and self-reliance, and low on others, such as conformity and moral certainty’.

T.S. Eliot celebrated the ‘near mystical’ quality of idea-incubation. Alexander Graham Bell spoke of the power of ‘unconscious cerebration’. While Lewis Carroll advocated for the importance of mental ‘mastication’ (chewing on a thought).

In almost every ‘system’ of creativity devised, the most important part of the process involves a letting go of your consciousness to let the deeper parts of your mind come in and make connections.

Without incubation—that space away from direct thought—there is no Eureka!

4 ways to nurture and control your unconscious mind

So, we’ve seen how creative insight depends on a multitude of free-flowing ideas and emotions, all funneled through our unconscious mind. But is this a skill we can actually train?

In our busy day to day with our attention constantly being pushed and pulled in every direction like our mind is being drawn and quartered, there are, however, a few methods you can use to block out the world and slip into this deep sense of mental meandering.

The current trend for mindfulness training and the rise in meditation isn’t just for calming our inner mind.

One of the greatest advocates for the creative benefits of meditation is filmmaker David Lynch, who has practiced Transcendental Meditation for years.

The purpose, as Lynch describes it, is not to ‘get’ more creative. Increased creative thinking, rather, comes as a side effect of the calming of the inner mind during and after meditation. Rather than be controlled by his thoughts and emotions (like the conscious brain so often is), post-meditation, these become raw materials he can pick up and manipulate as he pleases.

But Transcendental meditation is only one of numerous forms of meditation that you can practice. If you’re interested in getting started, here’s a great article on building a daily meditation practice from Zen Habit’s Leo Babauta.

2. Schedule disruptions to your day

Taking breaks is nothing new. Back in the 20s, Wallas proposed a technique for optimizing the Incubation stage of creativity—something our modern day psychology of productivity would confirm.

His method involved building interruptions of concentrated effort into our workflow. Some people to do this deliberately, scheduling mandatory breaks into their day, while others take a more natural approach—drinking enough so that the call of nature forces them to take ‘micro breaks’.

“We can often get more result in the same way by beginning several problems in succession, and voluntarily leaving them unfinished while we turn to others, than by finding our work on each problem at one sitting.”

It’s why people like designers Dann Petty and Jeff Sheldon start multiple projects at once. Multitasking may kill your brain, but having multiple things incubating at once can have real benefits.

There’s a reason the creative or the academic is often portrayed as a loner, inept in social situations. When looking at creative minds and social rejection, researchers found that a feeling of rejection or isolation from their peers may spur on more creative thinking.

Many of the greatest thinkers of our time have been outsiders in some aspect.

Think of Einstein moving from Germany to Switzerland, Italy, and then the US. Ghandi growing up in South Africa. Stravinsky leaving Russia. Eliot settling in England. Martha Graham as a child moving from the South to California where she became exposed to and influenced by Asian art. Freud as Jewish in Catholic Vienna. Or Picasso leaving Spain for France.

As Mihaly Csikszentmihalyi sums up:

“It seems that a person who is comfortably settled in the bosom of society has fewer incentives to change the status quo.”

The outsider—someone who faces a personal sense of rejection or being different, or is actually in a place of social isolation—is not only in a position to experience new and novel experiences, but is more likely to spend more time in their own heads working these ideas through and seeing how they can be used.

One of the traits that Barron found during his creativity study was that creative people are more introspective. But not only in the sense that they have an increased level of self-awareness, but that they also have a familiarity with the darker and more uncomfortable parts of their psyche.

You’ve probably read about the creative benefits of daydreaming, but one of the things that is rarely mentioned in these essays is the importance of uninhibited daydreaming—not letting your brain filter the thoughts coming into your head.

In a subsequent study of creative writers, Barron and researcher Donald MacKinnon found that the average writer was in the top 15% of the general population on all measures of psychopathology.

But, strangely enough, these writers also scored extremely high on all measures of psychological health—meaning they were better equipped to deal with these thoughts and feelings.

For most of us, those darker thoughts are filtered and tucked away. They don’t serve us as good, law-abiding and moralistic citizens.

But, Barron would argue it’s this full experience of the light and the dark, even if only in our heads, that fuels the creative mind. And the more we experience these thoughts, the more we’re able to control them.

Effectively, the creative mind is able to shape our experience not only through the external world, but with a deep synthesis of our imagination. It’s why it’s so common to hear creative individuals say that inspiration comes from within, not without.

Keats described his life of solitude as his ‘wife and child’—something that both gave him attention and needed his attention.

While Thoreau exclaimed, “I never found the companion that was so companionable as solitude.”

In our lives, we face so many distractions, notifications, and constant demands on our attention that it’s difficult to find time to let your thoughts go inside.

Yet when we search inside ourselves, we become more open to the ambiguities of life.

And there, nestled among the chaos, is the birthplace of creativity. 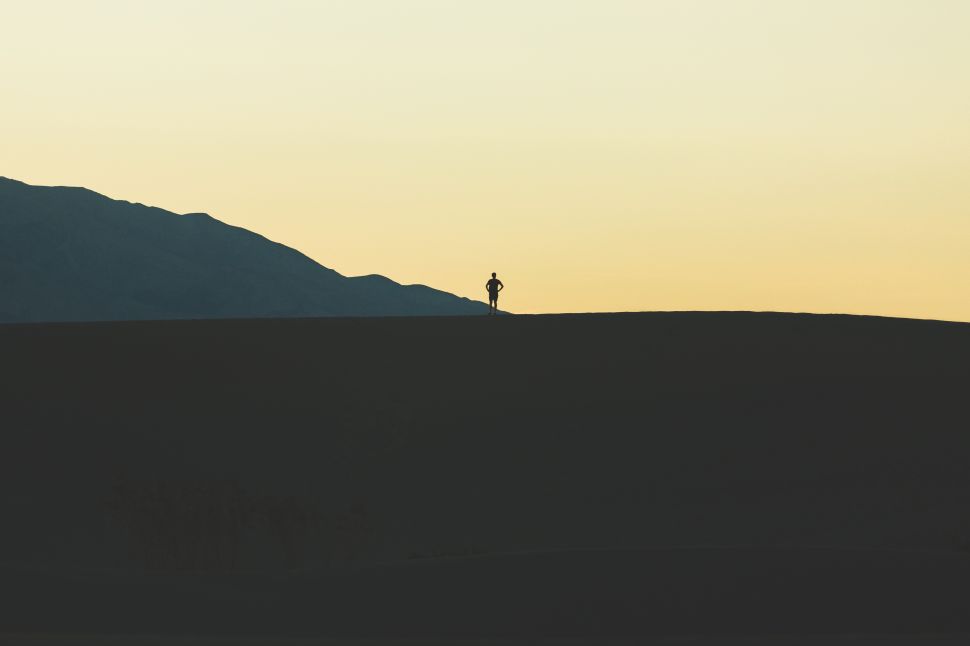