Raise your flayed man flags at half mast: Ramsay Bolton, everyone’s favorite sociopath, met his end after the Battle of the Bastards. Sansa Stark fed him to his own dogs in a baller Lion-King-style move that had me watching that gif of her little smile at the end of the episode on a loop.

I was lucky enough to speak with the much less murderous actor behind Ramsay, Iwan Rheon. You’ll have to imagine his Welsh accent for yourself, but take my word for it: it’s charming. I actually recommend reading the entire interview out-loud with your most talented friend.

As for spoilers, yes. Obviously. It’s been days. There’s a statute of limitations when it comes to appointment television.

Observer: Do you watch the show?

Iwan Rheon: I do, yeah. I’m a big fan of the show actually. I kind of got hooked when they offered me the part for Season 3. I watched Season 1 and 2 in about a week I think, and got really hooked. So I really enjoy watching, and I find I learn a lot from watching myself. You remember what you thought you did and then you see what you actually did, and it’s really interesting to see.

They’re all disturbed. [Laughs] No, I mean, everyone needs fangirls, don’t they? So why can’t Ramsay have some.

Has portraying such an evil character changed the way fans interact with you?

Not really. I dunno. Maybe a lot of people just don’t come and talk to me because they’re afraid of being flayed, but the thing I’m noticing is they’re saying, “We’re really glad to see the back of Ramsay, but we’ll kind of miss you,” which means the fans can see that it’s an actor, playing a role, which is really nice. I’d hate for people to actually think I was a raging psychopath.

Did Ramsay get the death you would’ve wanted? If you could have chosen any other death, how would you have wanted to go?

Oh, battling a dragon probably. But I’ll take the dogs. The dogs is a lovely sense of irony. It’s the right thing, I think.

So I hear you’re playing Hitler next [in TV movie, Adolf the Artist.]

Yeah. Well, I’ve already filmed it. It’s not been aired yet, I don’t think. It’s a short film for Sky Atlantic over here. It’s kind of like a comedy.

One of those classic Hitler comedies.

Well, it depicts Hitler before we know him; it’s him trying to be an artist in Vienna. So it’s an untold story. It’s quite cool.

They’d probably be very good friends. The Hitler that I play is way before he was politically motivated or anything, so he’s just a strange young man who really wanted to be an artist as opposed to the monster that we’ve come to know through history. But Ramsay, he gives that Hitler a good run for his money, I’d say.

Do you think Ramsay has a softhearted origin story too? Maybe he just wanted to be an artist back at the Dreadfort.

[Laughs] I don’t know. I’m not sure he would have been allowed. Maybe. Maybe if he had just been cuddled more by his father, that’s what I think it is. I always say that to Michael McElhatton (Roose Bolton).

What’s been the hardest scene for you to film as Ramsay?

The rape scene is the most difficult one, in Season Five, because it’s just so horrible. It was a very, very difficult scene to do. I didn’t get really any sleep the night before that. Things like that are just really horrible to be involved with, but you just get on with it. Sophie [Turner] and Alfie [Allen] were great, and Jeremy Podeswa, the director, was really sensitive about everything, and it was a real somber mood on set, but I was really glad when that day was over.

How do you go back to feeling normal after that’s over?

Just go out, and have dinner with the guys and have a game of pool or something. I think that’s what we did. Have a few drinks—we needed it [laughs].

So, would you have changed anything about Ramsay’s strategy in the Battle of the Bastards?

To be honest, Ramsay didn’t do anything wrong. I don’t think I’d do anything differently, because he had won the battle— Had Sansa never sent the raven to Littlefinger they’d never have turned up and it would have all been over. I don’t think Ramsay would have changed a thing, but I don’t think he would have needed to. It was practically sound. He knew the odds. He knew he had a better army and so he used it. And he beat them fair and square until the knights came, in shining armor, across the hill.

If only Rickon had tried to dodge! If only he had zig-zagged a little bit. I was shouting that at my screen.

[Laughs] Mmmmm, I don’t think Ramsay would have had a problem with that.

What are you going to miss about being on Game of Thrones?

I’m going to miss getting the scripts, and the excitement to start to shoot again, and going over and seeing everyone, and just being part of the whole show. It’s been a wonderful experience to get to do it, and I’m very, very grateful. So I think that’s what I’ll miss the most: doing the work, and getting to do lovely scenes with lovely actors.

Now that you’re out of the show, who do you want on the Iron Throne?

I think the best overall person for the job would be Jon Snow.

I think he’s good! I think Daenerys would be a bit mad sometimes; I think she’s got a bit of her dad in her. She tends to get a bit extreme sometimes and she makes some silly mistakes. I think Jon Snow because he’s good. Well he should certainly be Hand of the King, or right up there. They need someone good like him.

What about Sansa? Sansa won that battle! She made the real plan!

Yeah, yeah, I suppose she did. I wouldn’t mind Sansa being on the Throne. I’m not sure about her leadership qualities though—I’ve not seen any of that yet.

Do you read fan-theories? Are there any that you believe?

Not really. I’ve heard one, with Daenerys, where it’s a flashback and she’s in the Great Hall where the Iron Throne is, and it’s just all burnt and a mess and everyone’s gone, and so that [actually happening] is quite an interesting theory, but I can’t see it all amounting to nothing. Something good’s got to come out of it all.

What about Sansa being pregnant?

Poor Sansa. That would be quite awful for her, wouldn’t it? Yeah, I mean, there’s every chance that could happen. I have absolutely no idea. Not a clue.

Oh, I have, but not in its mathematical format that you used. Yeah, I mean that’s a very good theory. I’ve got absolutely no idea whether it’s true or not but it’s a very, very good theory. I’ve always been a little bit unsure as to whether [Jon] really was Ned Stark’s bastard even though he said he was. There was something going on in Sean Bean’s eye. Yeah, I think that would be a very fitting end. 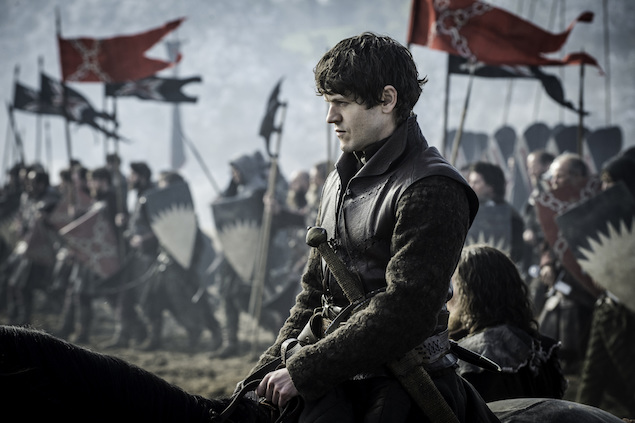