“My beard is owned by HBO,” Kristofer Hivju jokes over the phone. “Without it I don’t have a job.” The 37-year-old Norwegian actor might be kidding, but he’s not entirely wrong. Right now Hivju is probably best known for his reoccurring role as head wilding/Brienne of Tarth-charmer Tormund Giantsbane in HBO’s massively popular fantasy series Game of Thrones. Facial hair is crucial to his character’s lawless aesthetic — and it stands to reason that like his on-screen comrade Jon Snow (Kit Harington), he’d be virtually unrecognizable without it.

Hivju’s follicles certainly make him a shoe-in for his latest role as 13th century rebel Viking Torstein in Magnolia Pictures’ The Last King, an action-adventure period film based on true events in civil war-torn Norway. After the country’s acting king dies, his illegitimate child, then just a baby, is the last heir to the throne. In order to keep Norway from falling into the hands of the church’s corrupt Bishopmen, Skjervald (Jakob Oftebro) and Torstein (Hivju), two members of the rebel group Birkebein must protect the infant king by safely taking him to the Norwegian capital of Trondheim.

Below, Hivju calls up the Observer to tell us about more his forthcoming feature, improvising The Last King scenes based on the baby actor’s moods, and whether or not he, too, “ships” a Tormund-Brienne romance.

What drew you to the role of Torstein in The Last King?

It’s always interesting to play the heroes from your childhood. In school we learned about the Birkebeinerne as some of the bravest men. And these two guys saving the Norwegian king… There’s a kind of mythology around it. There’s a painting of these two guys — one of our posters is based on a painting where they’re skiing together with an axe in hand in the snow. We don’t know that much about those two guys — we just know that they saved Norway.

So much of The Last King’s choreography is built around skiing as a mode of transportation — both to get from point A to point B, and as a means of escape. To what extent did you have to hone your own skiing skills?

Well, it’s said that Norwegians are born with skis for our legs. That’s why we always win the Olympics. [Laughs.]

[Skiing] was the only [method] of transportation in the snow. I did a lot of work to get good. Some [of the more complex moves] were stunts the insurance company wouldn’t allow us to do. But I will say this: I sacrificed my life in some of those [stunts] to make it look real. And the cameraman — he sacrificed [a lot] as well because he had to ski backwards with the camera to get it right. We did a lot and we almost died, but you only need one good take. [The Last King] is Vikings on skis — that’s the only thing people need to hear. [Laughs.]

To what extent did you research this period of time in Norwegian history?

Well, it’s definitely one of the most important events in Norwegian history because if they had [failed in their mission], there wouldn’t be a Norway. [For a long time], the Vikings were only fighting for glory, for money, for power. But at this time, we have this first Norwegian army that fought for something bigger than themselves. They fought for the people’s freedom, and for the king, and for the nation. So, that’s the interesting thing to follow the history from the Vikings’ selfishness to a more united way of thinking.

The environment looked so cold and unforgiving — not too unlike Tormund’s life Beyond the Wall on Game of Thrones.

Of course there are similarities. But the funny thing is, I thought we were trying to do one of the biggest action films ever made in Norway. Torstein is a tough and cool guy, but when the baby came on set, all focus and all attention went to taking care of the child. So then, the idea of this cool guy became secondary. It was all about trying to save that little child. [Oftebro and I] joked about how we were supposed to be action heroes but we ended up being nannies on a skiing trip.

So instead of Three Men and a Baby, it’s Two Vikings and a Baby.

Yeah, we talked about that!

There’s one particularly brutal scene where you and Oftebro — and the baby, of course — walk through a dangerous snowstorm and find shelter in an abandoned hut. How much of the film’s ice and snow was real vs. movie magic and set design?

The director of this, Nils Gaup, his breakthrough was with an Oscar-nominated film called Pathfinder. They actually remade it in the U.S. with the same title. Very different movies, though. He has this vision — he wanted to make [The Last King] realistically. So it has this documentaristic element. What you see is what it was. We shot it outside. No sets. Everything’s real. We tried to make the crew as small as possible.

Did the cast and crew have concerns about keeping the baby warm enough in such an unforgiving climate?

The baby’s safety was the most important thing. But still, Norwegian babies are used to being out in the wilderness. [Laughs.] You’re out there in the mountains and you have a small baby, it’s freezing cold, and everybody’s attention and concentration on set was so different when the baby was there because that was the main thing. He’s a great actor, though, the guy who plays the little boy. He never even read the script! [Laughs.] We had to do whatever he wanted.

In the shelter scene, we had all of these great ideas, and the script was beautifully written. But we had to do whatever it took [to get the shot] and [react to] whatever [the baby] does. Most of that scene was improvised because [the baby] was wouldn’t stop crying. So we just came up with this story about a horse riding through the fire, doing whatever it takes, and that was just in the moment. Many of the scenes were like that. If he didn’t cry, we were like, “Wow, he stopped crying.” If he was crying, we were like, “Boogie-boogie-boogie-boogie!” They say you should not make movies with babies and animals, and we had 50 horses and a baby with us. You just go with the flow.

You do make a lot of silly faces in The Last King to cheer up the baby. That comedic break from the tough-guy act reminded me of the, uh, looks you give Gwendoline Christie on Game of Thrones. Was all of that improvised, too?

No, actually, that was done from the very beginning. We had fun with it, though. That’s something [showrunners] Dave [Benioff] and Dan [Weiss] had planned. It was in the script.

Yeah, you know, I just joined Instagram. And I’ve never been on social media. So suddenly I’m exposed to all of the fans and the fan theories and the fan art. It’s so much fun. I enjoy it a lot. It’s almost touching how many fun drawings and cartoons things people make and the enthusiasm about this strange flirt.

You have to wait and see, but if I can speak on behalf of Tormund, I will say that he’s very into this girl. When you have a relationship where you don’t know who will win in a fight, that’s a great start to a relationship.

The Last King comes to theaters, OnDemand, Amazon Video, and iTunes on June 17th. Game of Thrones airs every Sunday on HBO at 9 p.m. EST. 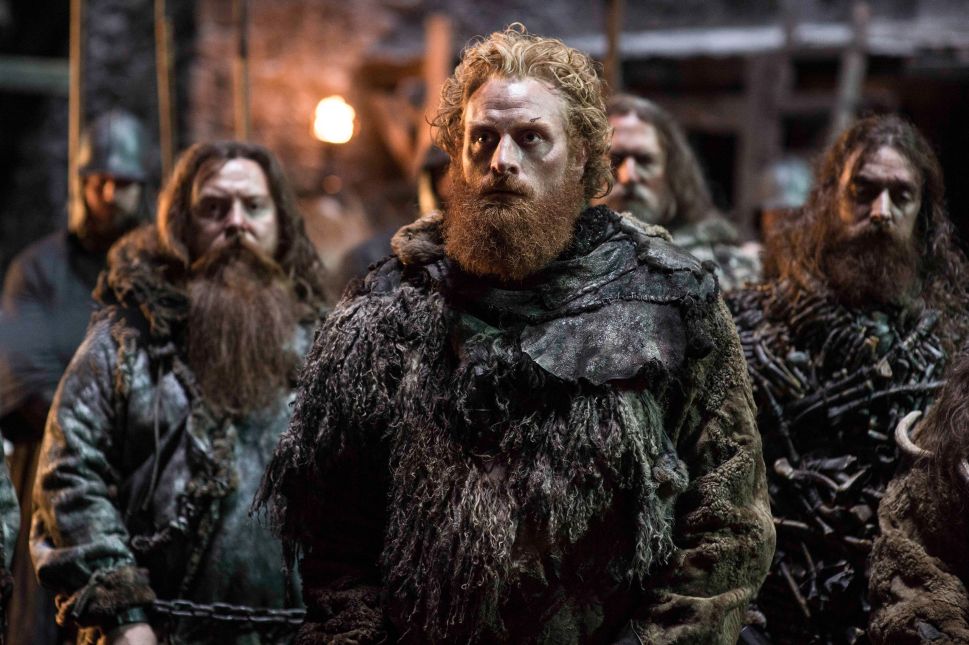