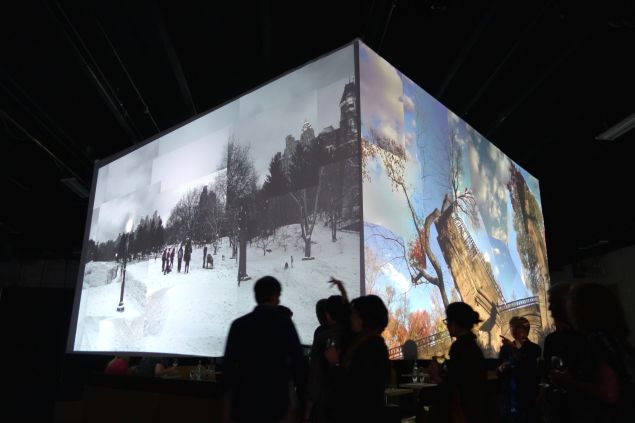 Dining out in L.A. is often about enjoying the show as much as it is about food. Here are four new ways to have dinner with a side of entertainment.

If you believe everybody cool in New York eventually heads to Los Angeles, it’s no surprise at all that Montgomery Knott’s roving food-meet-art pop-up is having its last stand from now through Oct. 1 in downtown L.A.

I went to the first incarnation of Monkey Town 12 years ago in Williamsburg and seem to remember sitting on the floor, eating Mexican food made by Gramercy Tavern alum Josh Cross and Chanterelle alum Coleman Lee Foster, passing on the hash brownies that were circulated, watching guys play Xbox on screens that surrounded us, enjoying a performance from noise-rock geniuses (and friends of Animal Collective before they became Animal Collective) Black Dice and geeking out with then-Village Voice food critic Robert Sietsema about how, whoa, Knott was from Texas and Cross and Foster were from Texas and Sietsema was from Texas and I was from Texas. I swear I didn’t eat any hash brownies. 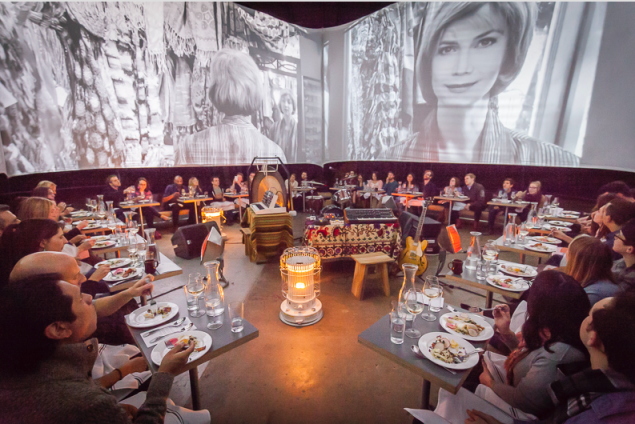 Monkey Town is a feast for the senses. (Photo: Monkey Town)

Monkey Town is more polished now, but still refreshingly indie at its core, with diners sitting in a 27-foot cube watching a diverse array of videos from artists and filmmakers including Knott himself while eating a tasting menu from Momofuku Ssam Bar alum Nick Montgomery (hey, another N.Y. transplant!). Montgomery also cooked at the Brooklyn Star, the restaurant that OG Momofuku Noodle Bar chef Joaquin Baca opened in Williamsburg after leaving the David Chang empire.

Montgomery’s dishes—like heirloom tomatoes with charred corn and torpedo onions; fresh cavatelli with chicken confit, cauliflower and hazelnuts; and red-wine-braised short rib with roasted radishes and crispy shallots—are wonderful and inventive but not weird, less experimental than what you’ll find at avant-garde pop-ups like Wolvesmouth. Montgomery cooks like an accomplished chef with little to prove.

With 16 different videos plus a live performance that changes regularly, Monkey Town’s programming is eclectic and purposefully unappetizing at times. You’ll see Central Park and kids playing blissfully and bizarre fashion and grotesque displays and a wolf with zero-fucks-left-to-give riding a motorcycle and smoking while he plots a brutal act.

On the night we visited, the performer was art-rock band Dallas Acid. The trio includes a woman playing instruments such as a gong. She reminded my dining companion of Aimee Mann, except that the gong-player had better hair so she clearly wasn’t Aimee Mann. (Nobody at our table was high, I promise.) There was a song and a video called Beamers and Bloody Marys that indeed delivered on the band’s promise of BMWs and brunch cocktails.

We recommend Monkey Town highly to fans of food, film, art, indie rock and a good value: Tickets, which include a wine pairing, range from $45 to $50 for a four-to-five-course meal. 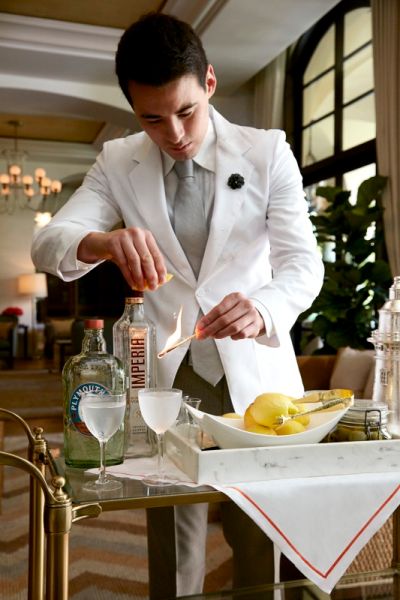 Last Friday, during Georgie’s opening week, food-TV fans might have been tickled to see Zakarian and L.A. celebrity chef Ludo Lefebvre chatting during Lefebvre’s dinner with local restaurant mogul Stephane Bombet. But regardless of who’s in the dining room, you can get a show at Georgie and the adjacent Garden Bar at the Montage Beverly Hills every single night, thanks to a martini cart that brings premium vodka and gin along with fire (matches are lit for lemon-peel garnishes) to your table. Zakarian might be from New York, but we think he’ll burn bright in Beverly Hills. 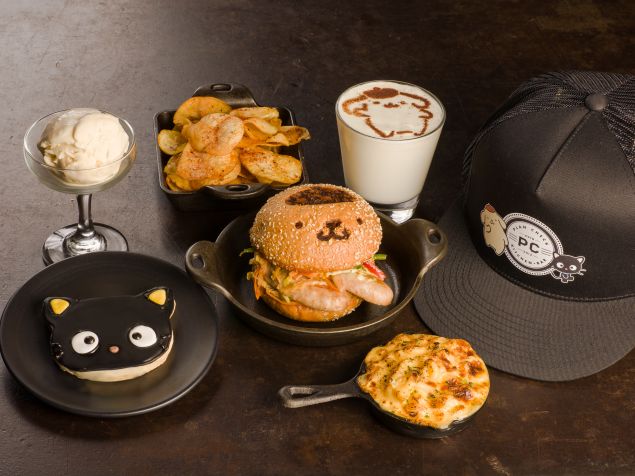 Plan Check, with Sawtelle, Fairfax and downtown gastropubs, is known for its modern riffs on comfort food, including some of L.A.’s mostly highly regarded burgers. It’s also known for pop-ups and fun limited-time menus (full disclosure: I’m curating a future guest-chef series at Plan Check, to be announced).

From now through July 10 at Plan Check, the food is simultaneously the entertainment, thanks to a collaboration with Sanrio that celebrates the 20th anniversary of beloved characters Pompompurin and Chococat. The Pompompurin grilled sausage sandwich and the Chococat cookie included in the $39 tasting menu (which also comes with swag in the form of a Pompompurin/Chococat cap) are almost too cute to eat. Almost. Anyway, whether you spend more time Snapchatting and Instagramming (#SanrioXPlanCheck) than actually consuming this food is totally your decision. 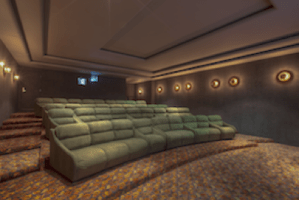 Estrella has its own screening room. (Photo: Gaelen Casey)

Dakota Weiss (you might remember her from “Top Chef”) and the team at Estrella have unveiled a 55-seat screening room for your one-stop dinner-and-a-movie needs. The theater, attached to Estrella’s main dining room and bar, can be rented for private events and will likely announce monthly open-to-the-public movie nights soon.

You can, of course, eat at Estrella, with its bacon-wrapped, egg-stuffed avocado, before the show. But Weiss has also created a theater menu with popcorn in dozens of flavors, ice cream, oysters, vodka, cheese, charcuterie, poke, dim sum and tacos. How very L.A. 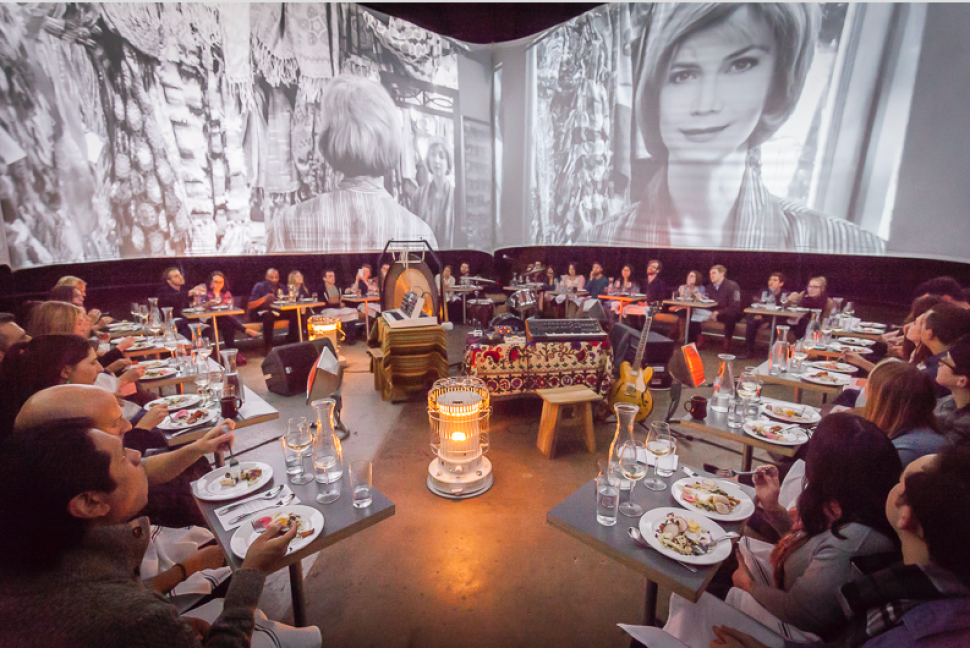