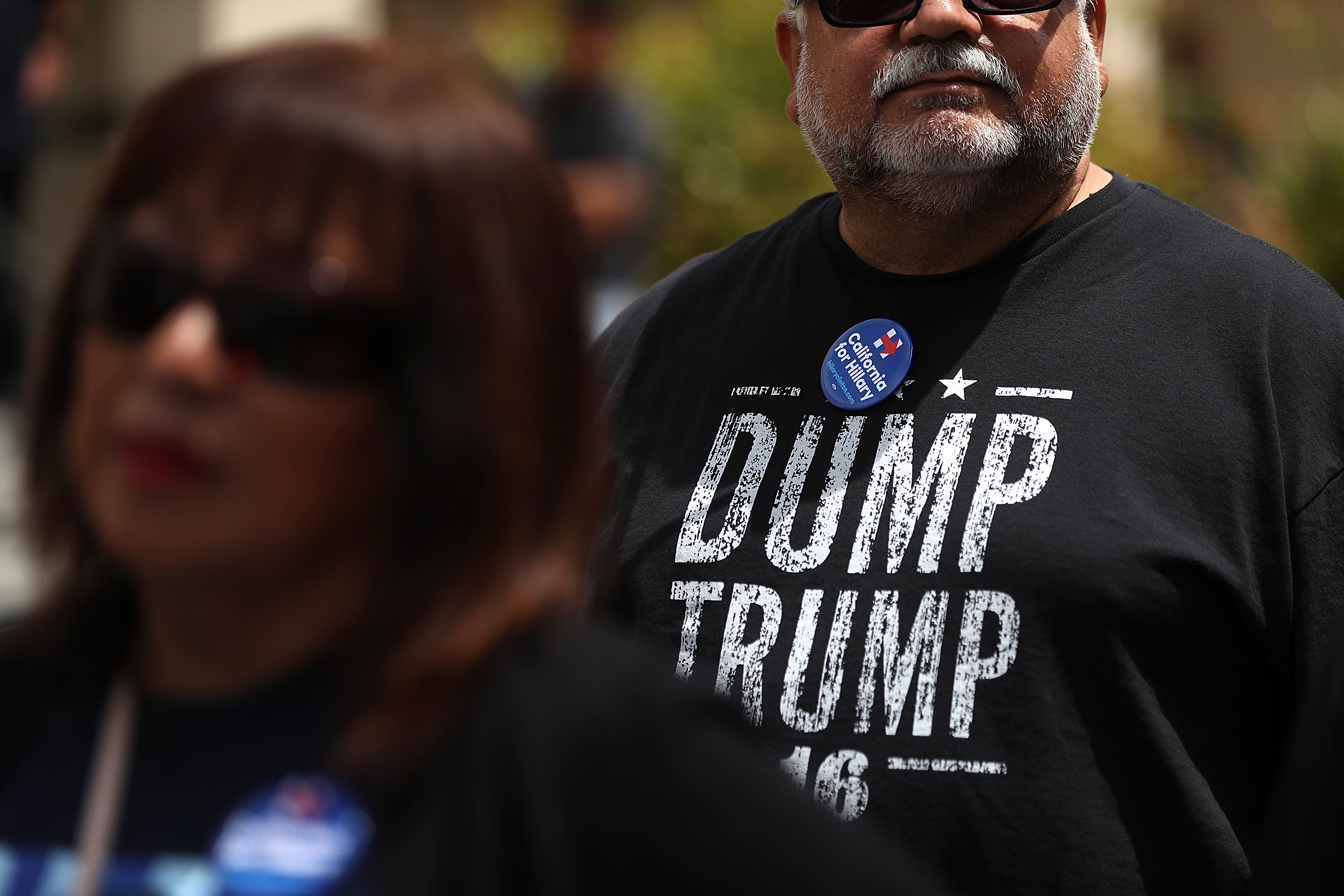 While Bernie Sanders, in the death throes of his campaign, continues to yammer about a “political revolution,” he and many television commentators are missing the real revolution that’s happening quietly and out of view, as many revolutions do.

Real revolutions in a democracy require more than rhetoric and rallies. A revolution in a democratic republic such as ours often takes place in the unsexy and unseen work of registering voters and turning them out.

While the TV screens are filled with cameras focused on an empty podium while pundits breathlessly await the arrival of Donald Trump, a key demographic group that Trump has angered is quietly beginning to assert its growing muscle out of the cameras’ view. Type “Latino registration 2016” into Google, and in 0.49 seconds, you’ll have more than 800,000 results to choose from.

Although there are plenty of such stories online, they certainly aren’t getting the same kind of television coverage Trump’s empty podium receives. Clearly, Gil Scott-Heron was onto something when he assured us in 1970 that the revolution will not be televised.

The data points developing at the moment are quite interesting. According to The Hill, the surge in naturalizations and voter registrations among Latinos are such that the Latino vote nationwide is projected to increase by as many as two million voters in 2016. While some articles dismiss the potential impact of this surge due to the fact that so many Latinos live in California (which is safely Democratic) and Texas (which is safely Republican), there is growing evidence that the spike in Latino registration is not confined to these two states.

The Washington Post reported on May 9 that spikes in Democratic registration are being seen in the crucial swing states of Florida, Colorado and Nevada, where the Latino vote has been a major factor in turning all three from Republican red in 2004 to Democratic blue in 2008 and 2012. Certainly, not all Latinos have the same voting patterns, but even among Cuban-Americans in Florida, who traditionally have voted heavily Republican, there has been movement to the Democrats among the younger generations, and a heavy influx of Puerto Ricans into the state, especially in the Orlando area, also stands to benefit Team Blue. According to an article published by the Pew Research Center last October, Florida’s Puerto Rican population has surpassed one million and is nearly as large as New York’s. And the Puerto Rican vote has traditionally been strongly Democratic.

The aforementioned Washington Post article also reported demonstrable spikes specifically among Latino voters in two southern states increasingly coming into play: North Carolina, which narrowly went Democratic in 2008 and barely flipped back to the GOP in 2012, and Georgia, which may still be a few election cycles away from truly being competitive. Granted, there is not the same kind of Latino presence in these two southern states that one sees in Florida, Colorado and Nevada—and the extra 9,000 Latino voters registered in Georgia this cycle are not going to swing that state into the blue column by themselves—but rapidly changing North Carolina is becoming close enough that a few thousand extra Democratic votes could make the difference. Barack Obama won North Carolina by a little more than 14,000 votes in 2008, becoming the first Democratic presidential candidate to take the Tar Heel State since 1976. The next flip to Carolina blue is not likely to be another 32 years in coming, but it’s still close there, and the state’s small but growing Latino population could play a decisive role as soon as this November.

One also must not forget that Latinos make up almost five percent of the population in Virginia, formerly a solid red state that flipped to blue in each of the last two elections. If Latinos begin punching at or near their numerical weight in the voting booth, and overwhelmingly support Hillary Clinton over a Republican opponent the Latino community has come to despise, they could push Virginia completely out of reach for Trump.

If Latino voters take Florida, Colorado, Nevada, Virginia and even North Carolina off the table for the Republicans this November, Trump would have to make astonishing inroads in the blue-leaning states of the “Rust Belt” to cobble together a majority in the Electoral College and win the presidency. In such a scenario, the presumptive Republican nominee would have to win not only the ultimate swing state of Ohio, which has voted with the winning candidate in every election since 1960, and Iowa, which has gone blue in five of the last six elections, but he would also need to sweep Pennsylvania, Michigan, Minnesota and Wisconsin—none of which have gone red since Ronald Reagan was president. (Minnesota, in fact, hasn’t abandoned the Democrats since Richard Nixon’s 49-state landslide in 1972. The Gopher State has the longest Democratic presidential streak of any state in America; even New York and Massachusetts flipped red for Reagan.)

Then, there’s another nightmare scenario for Team Red that few people seem to be talking about yet. A massive spike in Latino registration, turnout and Democratic performance could jeopardize the Republican stranglehold on Arizona, which has gone into the GOP column all but once since 1948.

For the Democrats, Arizona has long been analogous to the football that Charlie Brown repeatedly tries to kick but always gets ripped away from him at the last second, landing him flat on his back every time. While neighboring states with large Latino populations have flipped to blue—including California, Colorado, Nevada and New Mexico—Arizona has remained stubbornly red. Frustrated Democrats have long puzzled over why they can’t win Arizona, and they remain convinced that if Latinos register and turn out in force, it is entirely possible it might join its neighbors in moving leftward. But thus far, such a development has remained elusive.

This year, however, there are troubling signs for Team Red in the Grand Canyon State. A poll released in late April showed Clinton defeating Trump by seven percent in Arizona. While a single poll is not necessarily a definitive indicator—and a later poll by Public Policy Polling gave Mr. Trump a four percent edge in the state—there’s also another sign that Arizona may not go according to form.

Senator John McCain, who has represented the state in the U.S. Senate for nearly 30 years, recently voiced his concern about the impact Mr. Trump’s candidacy might have on his own. According to Politico, which reported it obtained a recording of McCain speaking at a closed-door fundraiser in April, McCain said that the Latino community “is roused and angry in a way that I’ve never seen in 30 years.” Polling shows McCain facing tight primary and general election races in his campaign for a sixth Senate term.

Should Democrats break through and win Arizona, in combination with the other states where Latinos could play a decisive role, there is no realistic scenario by which Trump can win the presidency. He would be bled to death by too many cuts, without enough of the older, whiter states he would need to overcome losses in the formerly red states President Obama won in 2008 and 2012.

Trump shot himself to the front of the Republican pack by promising to build a wall to keep out Latino immigrants from Mexico and Central America. But in the process, he has built a political barrier, brick by brick, that may well wall off any prospect of a Trump victory in November. 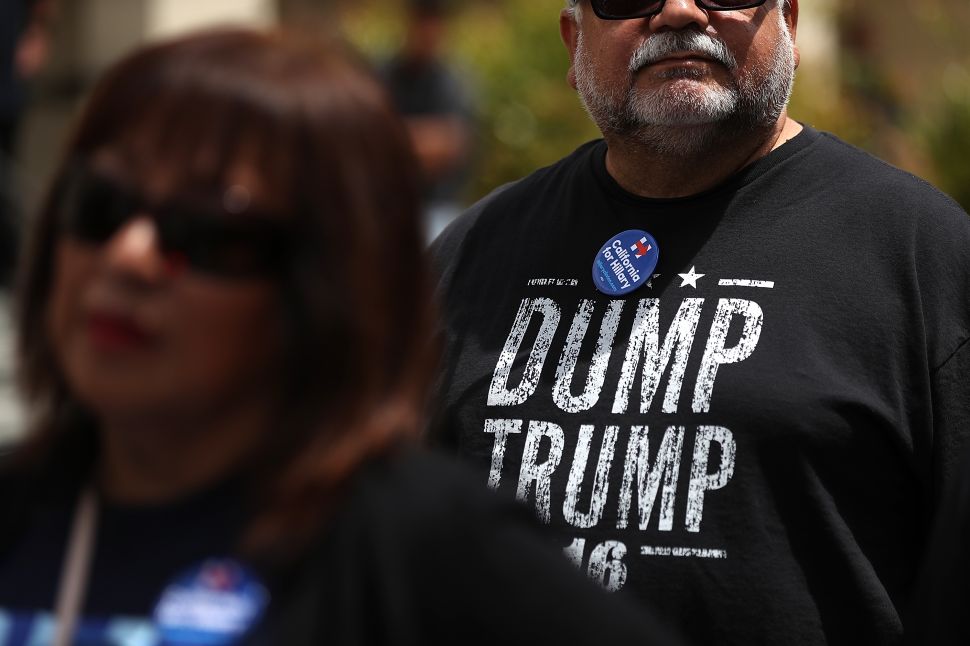