INT: Richie Finestra has gathered the entire staff of American Century Records, in the wake of HBO’s abrupt cancellation of Vinyl’s second season. Richie is just fucking covered in cocaine, but it’s fine because it’s the 1970s. The office walls are still plastered with spray paint, which is also fine because that’s how rock and roll works. Zak Yankovitch, standing off to the side in the shadows, does not have spray paint on him which is a metaphor. Devon Finestra and Jamie Vine are not there because they are women. Richie snorts a line of cocaine so large that quite frankly it would kill a fair-sized elephant, and begins to read from a piece of paper [also covered in cocaine]:

Richie [reading]: “After careful consideration, we have decided not to proceed with a second season of Vinyl. Obviously, this was not an easy decision,” HBO said in a statement. “We have enormous respect for the creative team and cast for their hard work and passion on this project.”

Silence, punctuated only by the sound of something by Foghat playing lightly in the background to indicate this is still the 1970s. Then:

Intern: Actually my name is —

Richie throws a glass of whiskey he most definitely was not holding a second ago against the wall.

Richie: I don’t give a SOMERSAULTING FUCK what your FUCKING name is, unless it’s Casey Bloys, president of HB-FUCKING-O, and you can pull a second season of Vinyl literally out of your asshole in the next ten seconds. Is that your name? Can you do that? In ten seconds, can you pull an entire second season of an HBO show out of your own fucking asshole?

Richie throws a second glass of whiskey against the wall.

Richie: Why do I even pay for the company HBO GO account? Do any of you remember what your first prestige HBO series was? Was it Sopranos? Was it Curb?

Richie: Kip I don’t know what the fuck you just said but that’s exactly the attitude I’m talking about. HBO isn’t about ratings, or showrunners, or Academy Award-winning executive-producers. It’s about a fucking feeling. HBO series should kick you in the dick repeatedly for hours on end. It should tear your heart out of your chest and eat it in front of your children. It should make you want to fuck, or fight, or fuck and fight at the same time, or fuck then fight and then fuck the person you just fought. It’s a FEELING. You should FEEL IT.

Clark Morelle: Can you offer any specifics?

Richie: NO! NO I CAN’T, CLARK! You’ll know the feeling when it comes because your dick will literally explode off of your body.

Julie: I might know a guy who helped do the “Battle of the Bastards”. People seemed to really like that.

Richie: UNGHHHH yes! Get me that!

Scott Levitt: Oh, I think Ballers is starting again. People really like The Rock, Richie. He gets numbers.

The office is buzzing with enthusiasm now. Buzzing with hope. Everyone shouts out names of HBO shows that are better than Vinyl, including Togetherness, which had its moments. Everybody but Zak, that is, because he still values money and profit over rock and roll. Finally, Clark chimes in:

Clark: Oh, I might have an in with that new thing, Any Given Wednesday with Bill Simmons.

Without a word, Richie walks out of the room. Right before he disappears he puts a hand to the paint-covered office walls. But instead of a normal handprint, he leaves one of those cool rock-n-roll devil horn things. Like this. This is another metaphor. One by one, the employees of American Records follows him, until the only two left are Lester Grimes and the intern from before.

Lester: Say, kid, I never did get your name. I’m Lester Grimes.

Intern looks directly into the camera.

Fade out over the sound of Thriller. 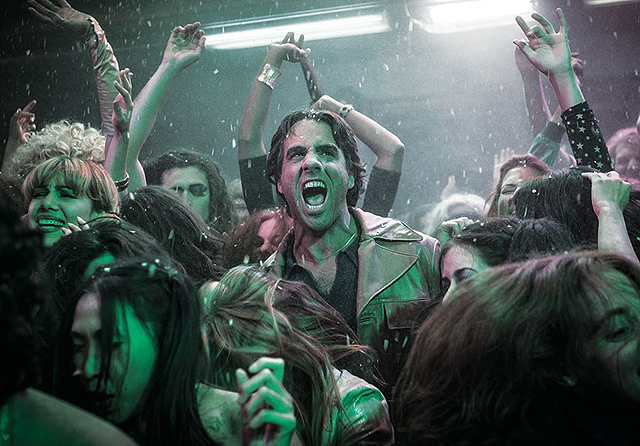