In an interview with MSNBC on June 24, Bernie Sanders answered “yes” to whether he would vote for Hillary Clinton in November, but then diverted into attacks on Donald Trump. Mainstream media outlets quickly began touting the answer as though Sanders endorsed Clinton.

“Sanders: I’ll Vote For Clinton,” read a misleading headline in The Washington Post, when the only thing Sanders said was “yes” in a insincere manner which gave the impression it wasn’t a question he wanted to answer. Rather, Sanders went with a response that would give the most credence to his continuing political movement, instead of giving Clinton pundits more ammunition with which to smear him.

Later that day, an interview on CNN, Sanders clarified his remark, saying he would likely vote for Clinton, but affirming he is still focused on the political revolution his campaign started. “My job right now, as a candidate, is to fight to make sure that the Democratic Party not only has the most progressive platform in the history of the Democratic Party, but that that platform is actually implemented by elected officials.”

Not reported with nearly the same veracity is what Sanders said on June 22 in an interview on C-Span: “The action is going to be within the Democratic Party, or perhaps a third party, but the goal right now is to open up the Democratic Party to millions of people who want to help shape this country.” The future of Sanders’ political revolution depends on how responsive the Democratic Establishment is in either embracing his progressive proposals, or continuing to in smear the Senator as they have done throughout the primaries.

Sanders’ response to voting for Bill Clinton in 1996 illuminates why Sanders responded “yes” to whether he would vote for Hillary Clinton in November. The response should in no way should be equated to an endorsement. “No, I do not want Bob Dole to be President. I’m voting for Bill Clinton,” Sanders said in his book, Outsider In The White House. “Do I have confidence that Clinton will stand up for the working people of this country—for children, for the elderly, for the folks who are hurting? No, I do not. But a Clinton victory could give us some time to build a movement, to develop a political infrastructure to protect what needs protecting, and to change the direction of the country.” By now, Bernie Sanders knows that if Hillary Clinton and the Democratic Establishment continue to refuse to take his campaign and supporters seriously, a third party will be necessary to restore democracy in America.

Regardless of whether or not Sanders eventually endorses Clinton, many of his supporters will never trust her—nor should they. Green Party candidate Jill Stein and Libertarian candidate Gary Johnson offer two other viable options, along with the protest action of writing in Bernie Sanders’ name to send a message to the Democratic National Committee.

Sanders does not want mainstream media to tarnish his legacy and discredit his movement as a “spoiler” for Clinton—a pejorative myth Ralph Nader debunked in a recent op-ed for Los Angeles Times. “Pragmatism is just another name for electoral extortion,” Nader wrote. “Either they are all spoilers, or none of them is. Arrogantly applying that word only to minor party candidates is to treat them as second-class citizens and set them up as scapegoats in close elections. Candidates running for public office on third-party or independent tickets are exercising their 1st Amendment rights: freedom of speech, assembly and petition. Insiders may oppose them but should not demand that they shut up. Their right to run and express themselves is equal to that of Democrats and Republicans.”

Bernie Sanders has every right to vote for Hillary Clinton. He also has every right to refuse to formally endorse her or actively campaign on her behalf, while maintaining a presence in the media and politics, and holding the Democratic Party accountable for progressive ideals and working and middle class Americans—even if that means eventually running on a third party ticket.

Despite what Clinton pundits say, avoiding an endorsement does not equate to helping Donald Trump. For too long, Establishment Democrats have ignored the voters Bernie Sanders represents—many of whom will be protesting at the Democratic National Convention in late July. As Sanders told Rachel Maddow in May 2016, his supporters have every right to protest peacefully outside Clinton events. “Never lose your sense of outrage,” he told them at a rally in New York City on Thursday, June 23.

Although Bernie Sanders is closer to conceding the Democratic nomination, his campaign continues to help ordinary people get involved in politics, rather than allowing the Democratic Party to be overrun by wealthy campaign contributors. Millions of Americans are angry with what has happened over the last couple of decades, and those principled sentiments aren’t going to fall by the wayside just so Hillary Clinton can push Democratic Party on a path to oligarchy. 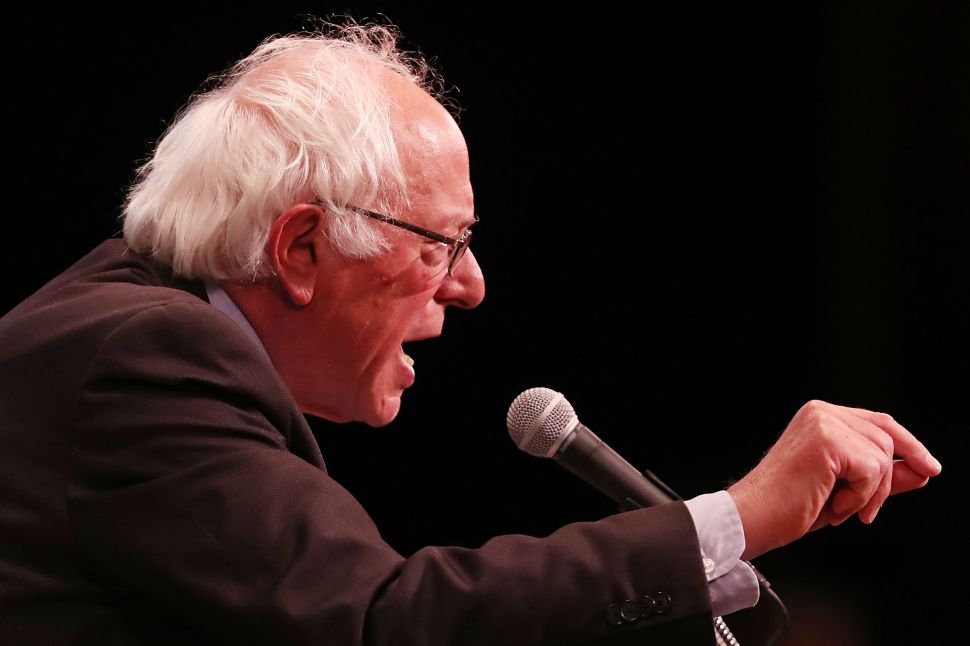