Espionage is widely reputed to be mankind’s second-oldest profession. Spying on each other has been around as long as people have been aggregating in anything like societies. The Old Testament is replete with examples, including Moses sending spies out ahead of the Israelites to reconnoiter the Promised Land as they made their way out of bondage in Egypt

From the outset there have been rules about what’s permissible in espionage. Not everyone went so far as German spymasters of a hundred years ago, who insisted spying is gentleman’s work, but physical violence has generally been considered out of bounds. Stealing secrets is the point of the business, not roughing each other up unnecessarily.

Moscow was always at the rougher end of the espionage spectrum, and it gave the Cold War a famous ruleset that inspired a generation of spies. Although the Moscow Rules were never definitively codified, they explained how difficult it was to conduct intelligence operations inside the Soviet Union, where the KGB owned the turf and could cover any suspected Western spy non-stop with physical and technical surveillance. This made conducting any espionage operations difficult and dangerous.

Key to the Moscow Rules was an understanding that coincidences rarely are: “Once is accident. Twice is coincidence. Three times is enemy action,” per hoary counterintelligence wisdom. In other words, if you think it’s the KGB, it probably is.

The collapse of the Soviet Union, when Moscow went broke, curtailed some of this aggressive surveillance but it never went away. The Federal Security Service or FSB, the successor to the KGB’s domestic side, remained a competent and well-staffed service even in the darkest days of post-Soviet Russia. They have made life difficult for any Western spies in the country, as I can attest, having received the unsubtle attention of the FSB more than once.

After the KGB officer Vladimir Putin took over the Kremlin, having used the FSB as his entrée to power, Russia’s intelligence agencies were flush with cash and eager for action. Since Russians assume all Westerners are spies until proven otherwise, this has meant a lot of work for the FSB, which under Putin has become every bit as powerful as the KGB ever was—and perhaps more so.

In recent years, as relations with the West have deteriorated, FSB activities against suspected Western spies have risen considerably. A taste of things to come arrived in mid-2013—just weeks before Edward Snowden defected to Moscow—when Ryan Fogle, a young CIA officer serving at the U.S. Embassy in Moscow, ostensibly as a novice diplomat, was arrested by the FSB. The Russians claimed to have caught Fogle trying to recruit a Russian turncoat and had the American spy deported from the country (declared persona non grata or PNG in spy-speak).

Worse, there are mounting indications that the FSB is exporting its nasty aggressiveness beyond Russia.

While PNG’ing an umasked fake diplomat is normal in the SpyWar, how the FSB handled Fogle—including parading him before the cameras in a ridiculous blond wig—indicated that the Kremlin was sending a message that any American espionage in the country would not be tolerated.

Over the last three years, FSB operations against American spies, real and imagined, in Russia have increased in intensity. While their surveillance has never been subtle, Americans who played by the rules—keep your work within mutually accepted bounds; be cagey but not a jerk; don’t make life needlessly difficult for the FSB guys following you, it’s their job too—received occasional harassment but nothing too aggressive, in most cases.

However, FSB operations against Americans inside Russia have gotten downright nasty, including harassment of diplomats at home plus scary levels of surveillance. It’s long been understood that FSB operatives visit the homes of American diplomats when the residents are out, sometimes leaving signs they were there, sending a message. Of late, that message has included changing passwords on computer accounts, breaking china in the kitchen, even killing family pets—and in the case of a friend of mine, defecating on a pillow.

Just how bad things have gotten is illustrated by a recent assault on an American official at the door of Embassy Moscow. On June 6, a uniformed FSB guard posted in front of the embassy attacked a diplomat who was about to enter the compound. The victim was roughed up so badly that he had to be medically evacuated from Russia, suffering a broken shoulder, among other injuries.

Exactly what inspired this assault remains unclear—neither side is commenting officially on the case—but it’s believed that the diplomat is in fact a spy. Whether he is or not, the FSB obviously believes him to be one. Regardless, physically attacking the other side wasn’t normal even in the depths of the Cold War. This attack goes beyond the vaunted Moscow Rules.

Worse, there are mounting indications that the FSB is exporting its nasty aggressiveness beyond Russia. Recent reports indicate that rough Russian surveillance of American diplomats has become the norm in many countries, and in some cases it’s taken the form of aggressive harassment that is scaring our diplomats.

Across Europe, Moscow’s surveillance of American diplomats has jumped dramatically since 2013, and in the countries that spent the Cold War in the Warsaw Pact it’s become downright threatening. Russian spies have been breaking into the homes of our diplomats to intimidate them, tailing them aggressively to the point of stalking, and generally creating a climate of fear that’s reminiscent of the worst days of the Cold War.

The State Department is sufficiently rattled that it’s begun training diplomats in how to handle in-your-face Russian harassment, which is something the post-1991 generation of American diplomats has no experience of. As Norm Eisen, our ambassador to the Czech Republic from 2011 to 2014 (Prague being a hotbed of Russian espionage), who witnessed the emergence of these aggressive spy games, explained, “They are hitting American diplomats literally where they live.”

This secret offensive against American diplomats must been seen as part of a broader Kremlin strategy using the FSB as its extended arm for clandestine aggression—as part of what I’ve termed Special War. Bureaucracy matters here. The powerful FSB is Russia’s domestic intelligence agency. Officially, its foreign operations are limited to the former Soviet Union, what Moscow terms the “near abroad”—hence the FSB operatives who periodically get arrested in Ukraine.

Elsewhere foreign espionage is the work of Russia’s Foreign Intelligence Service or SVR and the military’s Main Intelligence Directorate or GRU. Every Russian embassy includes a station (what they call a residency or rezidentura in Russian) for both the SVR and GRU, with officers usually serving under diplomatic and related covers. Those agencies jealously guard their prerogatives in foreign operations and resent the FSB’s interference in such matters.

However, Putin, who takes a deep personal interest in all intelligence matters, favors the FSB—and, according to Western counterintelligence officials, he has allowed it to operate beyond the “near abroad” on a limited basis, on his authorization. The 2006 assassination of Alexander Litvinenko, the KGB/FSB defector who was notoriously killed in downtown London by polonium-210 in his tea, was the work of the FSB—not the SVR or GRU.

So was the mysterious death in Washington, DC of Mikhail Lesin, a longtime member of Putin’s inner circle who was fatally beaten last November only a mile from the White House. “This op bears the hallmarks of the FSB,” explained a senior Pentagon counterintelligence official, who noted that neither GRU nor the SVR would want to use its officials serving in Washington—most of whom are known to the FBI—for such a risky operation.

The move of the FSB into foreign intelligence against the West has been noted in many countries since 2013. In many cases, FSB operatives are appearing in NATO countries to supplement normal SVR and GRU operations, including the harassment of American diplomats. The FSB has closer ties to Russian organized crime than other Moscow spy agencies, and some of its operatives are active Mafiosi, making them a real risk to our officials.

Poland, a frontline NATO state with a savvy understanding of Kremlin espionage, has noticed a surge in Russian intelligence operations inside their country since 2013. Activities by the SVR and GRU have increased markedly, including attempts to recruit Polish officials, politicians, and journalists to spy for Moscow. They have also detected numerous operations by the FSB in Poland, a new development that has Warsaw concerned, since Polish counterintelligence has identified few of these fresh operatives. “The appearance of the FSB in our country is a big problem,” given that service’s aggressiveness, explained a senior Polish defense official: “We see this as a real threat.”

I’ve explained before that we’re in Cold War 2.0 with Putin’s Russia, whether we want to be or not. The espionage offensive unleashed by the Kremlin and the FSB since 2013 against the West—and particularly against America and its interests—is further proof that Moscow seeks this new confrontation, no matter what Putin and his mouthpieces may say publicly.

American diplomats have complained to Russian counterparts about FSB aggressions, including calling the Russian ambassador to Washington to the State Department after the June 6 assault in Moscow. But nobody should expect mere diplomatic politesse to get the FSB, the successor to the KGB, to behave better.

The only language Russian spies speak—including Vladimir Putin—is force and intimidation. That the FSB assaults American diplomats in Moscow and harasses their co-workers in many countries is a clear sign that Putin has no respect for Barack Obama and feels he can get away with anything without fear of our retaliation. So far, the former KGB officer has been correct in his assessment.

If we want the Kremlin’s Special War against the West, including brazen assaults on our diplomats, to cease we must resort to Cold War tactics, as the Russians already have. This includes finally taking counterintelligence seriously and starting to watch Russian intelligence operations abroad carefully—especially when they involve the unsavory FSB.

When the FSB misbehaves against American diplomats, the U.S. Government should do what we did during the Cold War and evict known Russian spies from our country. For every assault on one of our diplomats, a dozen SVR or GRU operatives will get PNG’d. Espionage tit-for-tat is something the Kremlin understands very well. The longer we stop fighting back, the longer Putin and his FSB will continue to get away with murder. 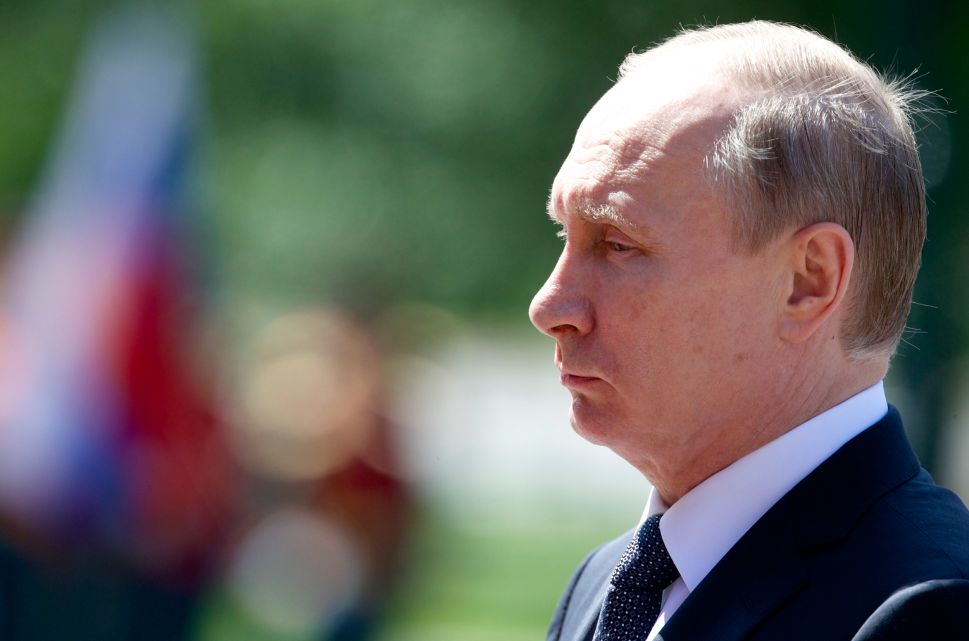