When stars collaborate on albums, it gets people guessing: “Who wrote what?”

“And they’re always wrong,” Elvis Costello once told me.

He was referring, specifically, to the clutch of songs he wrote with Paul McCartney in 1987, an exchange so fruitful, Costello later created full, joint albums with Burt Bacharach, Allen Toussaint and The Roots. “The parts of the songs that sound the most like Paul, I wrote, and the ones that sound most like me, Paul wrote,” Costello said.

Upon first hearing the music, without seeing the credits, I felt sure the smokey torch songs were penned by lang, the enigmatic power pop ditties by Case and the sensitive character portraits by Veirs. Certainly, that would conform to their work of the past.

Similarly, Case revealed that, while the cut “Atomic Number” would fit snugly on one of her vaunted solo albums, all three stars wrote it together. Case likens the collaboration process to a game of Legos. “I put my Lego piece with the others and then we have a Transformer,” she said.

Not that their process was quite so easy. “We had a few breakdowns,” Veirs said. “It wasn’t as dramatic as Fleetwood Mac, but we were bound to lock horns.”

“It’s hard for three alpha personalities,” Case said. “We’re not going to get everything we want. Ultimately, we had to serve the song.”

It helped that Veirs wrote so many of them. Though the least known of the trio, this Portland-based songwriter has put out nine albums in a little over a decade. Of the three artists, she’s the only one who had a hand in writing every single piece. “She’s a super-strict work horse,” Case said.

Yet, the project began with the best-known of the stars: lang. She modeled her idea on The Traveling Wilburys, which aligned Bob Dylan, Roy Orbison, Jeff Lynne, Tom Petty and George Harrison in the late-’80s.

Lang’s project started three years ago, when the Canadian singer moved to Portland where she was introduced by Case to local heroes Veirs and her husband Tucker Martine. A major music producer in the northwest, Martine owns a studio, where he has worked with The Decemberists, R.E.M., Modest Mouse, My Morning Jacket and many more. Lang sent emails to the two other artists proposing the project. That surprised them since she hadn’t put out an album in eight years. “She’s been blocked,” Veirs said. “She was feeling confused about what her next project would be. So she said, ‘Let’s try something fun.’ ”

The offer excited Veirs but also concerned her. “I had never done co-writing,” she said. “I wasn’t sure I could do it.”

Veirs tested the waters first with lang. Case proved more difficult to wrangle. “I was working with the New Pornographers on a record, I was touring behind a box set and I was also going to school to get my B.F.A.,” Case said. “I was supposed to get that degree back in 1998.”

Due to her dense schedule, Case didn’t add her touch until one year into the project. She describes her contribution as “like a pollinating insect. I’d do some pollinating, then have to leave again.”

It helped move things along that Veirs’ husband produced the album and provided the artists with time in his studio. “He’s the M.V.P of this band,” Case said. “We would send our demos off to Tucker and say, ‘Does this sound like a song?’ He would tell us, ‘If you add the bridge over there and move these lyrics over here or add horns, the problems you see won’t be there.’ ”

While the writing eventually jelled, the women weren’t sure their voices would. “It wasn’t until quite a long way into the writing process that we started harmonizing together,” Case said. “At one late point, kd said, ‘Man, I hope our voices work together.’ We were so busy writing, we hadn’t stopped to figure that part out.”

While their combined voices provide punctuation in the songs, each star takes the lead in a given track. At times, the lead voices match the songs you’d expect of them—especially in the first three numbers. Case kicks things off by singing the cheeky “Atomic Number,” followed by lang burning through the evocative “Honey and Smoke,” before Veirs delivers “Song for Judee,” one of her textbook character studies.

The last number tells the harrowing, real life tale of Judee Sill, an oft-forgotten singer-songwriter of the ’70s who was signed to David Geffen’s legendary Asylum Records, before Jackson Browne and the Eagles. Sill had a harrowing life, ruined by drug addiction and an attraction to danger. Before she died at age 35, in 1979, she managed to put out two treasured albums. The music stood out, in part, through her integration of classical chord structures in a folk-rock setting. Veirs said she discovered Sill’s story through a BBC documentary. It seemed like a perfect subject for her.

“I like when there’s a juxtaposition of a dark character and a bright feeling,” Veirs said. “Judee’s story is tragic but her passion for life is there. She wouldn’t have written these songs if she didn’t have that spark.”

In the past, Veirs has written similar odes to outsider artist Howard Finster and jazz performer Alice Coltrane. “I love sharing the story of an underdog,” she said.

“I would be surprised if we did it again. The process was hard.”

Veirs does so again on the new “Best Kept Secret,” whose title references a little known musician she admires. The artist in question—guitarist Tim Young—actually plays on the new album. Veirs’ ode to Young cleverly inverts the strategy of Carly Simon’s “You’re So Vain.” “I could have called the song ‘You’re So Humble,’ ” Veirs said with a laugh.

Similarly, Case continues her bent for enigmatic songs on the album. “I feel like writing about myself would be incredibly boring,” she said. “I like fairy tales a lot—Eastern European ones which don’t have a moral but which illuminate something you don’t want to forget.”

As seamless as the final album sounds, Veirs said, “I would be surprised if we did it again. The process was hard.”

At the same time, the singers are proud that, for a brief spell, they found a rich place to meet. The detente is reflected in their name, which mimics lang’s love of lower-case letters. “That’s our way of saying that not one of us is more important than the other,” Case said. “We’re all in this together.”

Case/lang/veirs headline the “Celebrate Brooklyn!” festival at the Bandshell in Prospect Park, on July 26. 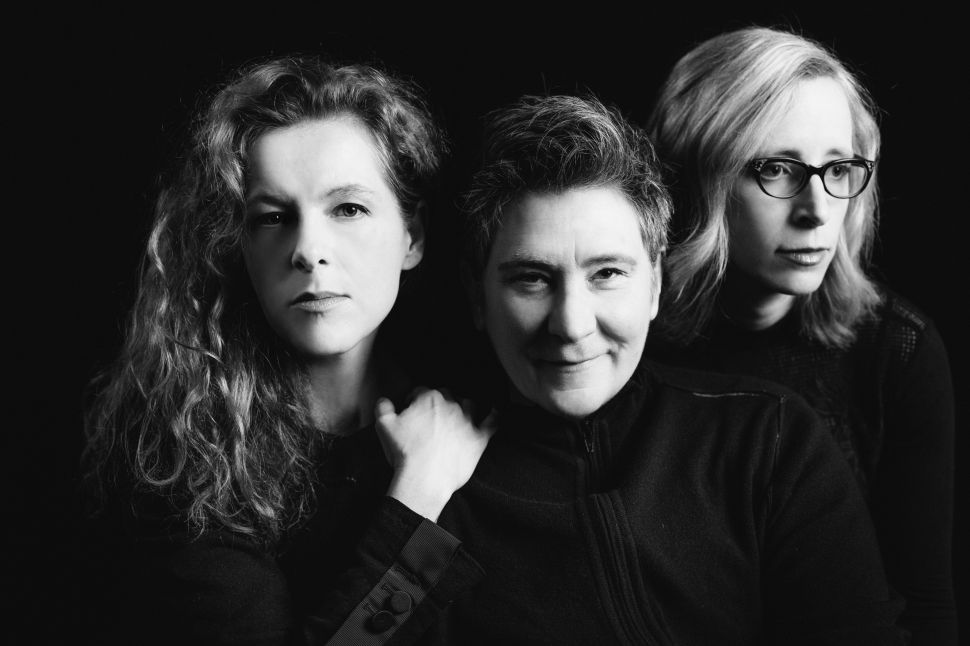