John Kingston, the Massachusetts bundler and Mitt Romney supporter who executive produced the documentary Mitt, is preparing to announce a ballot access initiative that is promising a potential new candidate a way to run for president. The effort has been described to potential hires as a desire to provide the American people with an alternative to the Democratic and Republican presumptive nominees, given that there are substantial objections to each of them within their own parties.

This new effort – one among many that have taken shape—can be viewed as aimed primarily at defeating Donald Trump’s presidential ambitions, since all of the people the Observer’s reporting has been able to identify with it are Republicans or associated with conservatives. Late last week, representatives from the as-yet-unnamed entity began contacting political and press operatives familiar with the mechanics third-party candidacies and ballot initiatives.

Others involved alongside Kingston in the effort include Joel Searby, a GOP pollster with the firm Data Targeting, who has been working for months with Weekly Standard editor Bill Kristol to recruit a Trump alternative, and Anne MacDonald, who was Laura Bush’s Chief of Staff after the Bush presidency. The lawyer for the group is said to be Matthew D. Sawyer, whose presence is notable because he was general counsel for Ross Perot’s 1996 bid, and also helped found the Reform Party, securing a ballot line on every state for both Perot in 1996 and Pat Buchanan in 2000.

It’s hardly a secret that many members of the GOP establishment have failed to coalesce behind their party’s nominee. An article last week in Mediaite even pondered the fate of the #NeverTrump movement following the group’s failure to recruit a National Review writer to carry the banner.

But what’s new here are the connections of some in the group to the top echelons of party elites and the degree to which names long associated with the Grand Old Party are suddenly willing to attach themselves to an effort thought to undermine its presumptive presidential nominee. In other words, it’s one thing to be less than thrilled by the prospect of a Trump candidacy and not doing much to advance that candidacy would be expected. But it’s another thing altogether for those who disfavor the candidate – including some who are related to candidates Trump defeated in the primary like Jeb Bush or others like Mitt Romney who Trump has brutally criticized for failing to defeat a weakened President Obama—to actively fund an effort designed to hurt the GOP’s chances of taking the White House in November.

John Kingston was active in Kristol’s failed efforts to recruit National Review writer David French to lead a third-party effort, a plan that struck even the National Review itself as odd, since French has, in its words, “little national profile,” and is best known for looking exactly like indie rocker Bob Mould. French is said to be a confidant of Romney’s who was trying to lure the former Massachusetts governor and two-time Republican candidate for president into this year’s race.

While some have suggested that the moment to recruit a viable third-party candidate – or even a legitimate protest candidate — has long passed, the group has told at least one operative they are trying to recruit that “they can get 46 states, between petitioning, using existing parties, and other mechanisms.” According to this source, the group says it has $1 million in seed money from John Kingston, who before taking up films made his dough as Vice Chairman at global asset management company AMG. As a member of the National Republican Senatorial Committee’s “Majority Makers” (big donors with access to important GOP senators at the Capitol Club), and the Republican Governor’s Association Executive Roundtable (same but for govs), Kingston is an establishment Republican all the way. His defection can be read either as a sign of broader trouble for Trump’s efforts to unite the party or as an act of loyalty toward persistent Trump critic Mitt Romney, who aggressively sought and accepted Trump’s support for his own candidacy just four years ago.

Emails to Kingston at Sword and Spoon Group and to Sawyer at his law firm were not returned at press time. This story will be updated to reflect their comments. 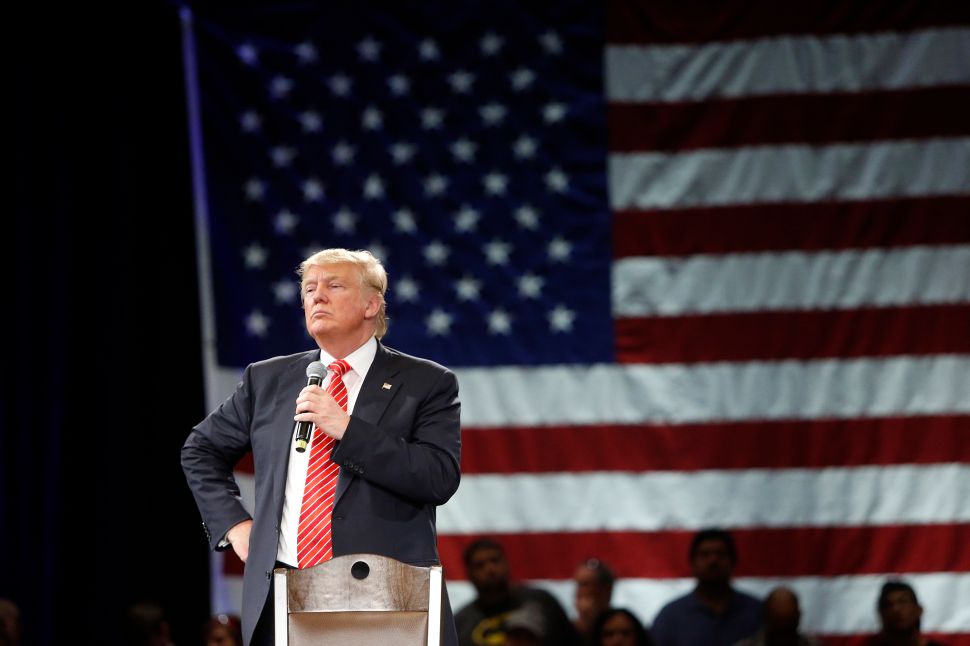