Lugubrious tearjerkers lapped up by drooling female readers have proven to be quite a profitable cottage industry. Nicholas Sparks has become a multi-millionaire by writing 18 American romance novels that refuse to underestimate the ignorance and innocence of those gullible readers, includingThe Notebook, Dear John and Message in a Bottle. Critics hate him and he cries all the way to the bank. Following in his footsteps, there is now England’s Jojo Moyes, a girl who is catching up fast. Her tearjerker Me Before You has made it to the big screen with mountains of Kleenex to spare. Forgive me if I temporarily shelve my customary cynicism in favor of commerce. A first film by theatre director Thea Sharrock, it goes down smooth as sherry.

The film’s appeal is due largely to the charisma of its two leads, Sam Claflin and Emilia Clarke. He’s the impossibly handsome young actor who played Finnick Odair in the Hunger Games series, as well as roles in one of the ghastly Pirates of the Caribbean clones. She’s a regular on the overrated TV series Game of Thrones. In real roles, they easily prove they’re both better than the junk they’ve been assigned so far.

In the opening setup, he’s Will Traynor, the privileged, well-educated son of a rich, aristocratic family who is making waves as a dashing banker and scheduled to marry his dream girl in a country wedding that dominates the society pages. She’s Lou Clark, a poor girl who works as a waitress in a bake shop that suddenly goes belly up, leaving her searching for a new job to help out with her family’s badly needed income. Suddenly, as things often happen in romance novels, the page turns when Will, preoccupied on his cellphone, steps off a curb and gets slammed by a speeding motorcycle in an accident that dashes his hopes, wrecks his future and turns him into a bitter, depressed and joyless paraplegic. His spinal injury also leaves him vulnerable to infections and confined to a wheelchair—a predicament he vows he will end with suicide. Without experience, but loaded with personality, Lou is hired by his distraught mother (the great Janet McTeer) to spend each day in the Traynor family castle and become Will’s companion and nurse. Resistant to her chatty ebullience, Will is turned off by this annoying extrovert, but is nevertheless amused by her outrageous costumes, faux pas and classic screw-ups. Their class differences are obvious, but eventually, of course, as their relationship grows, he loosens up, warms to her silliness and learns to laugh.

By the time Will melts in the glow of Lou’s charm and devotion, an unlikely duo has found true love. The conflict comes when they go away on a beach holiday in Majorca and Will is forced to decide if he’s man enough to overcome his paralysis and marry Lou, or make good on his threats of going to a beatific clinic in Switzerland, where suicide is legal and he can end his misery? Will Lou save him, or does Will carry out his threat, leaving everyone in the film dissolved in tears? No spoilers, but get ready to feel devastated, disappointed or uplifted by the theme that “Living boldly with love and courage is better than not living at all.”

If he doesn’t succumb to easy money and Hollywood blockbuster trash, Mr. Claflin is headed for a major career as a leading man. He even smiles in Technicolor. Ms. Clarke sparkles, but she plays every mood shift, from sadness to joy, with a cheerful exuberance that grows exhausting. She’s a symphony of facial tics, wide-open grins and a picket-fence smile that is gooier than Julia Roberts. She even acts with her eyebrows. Me Before You is not without punishment, but it’s so well made that it survives every drawback. I guess I was in just the right emotional frame of mind the day I saw it, but what the hey; a little occasional unrequited love on the screen never hurt anybody, including a critic. 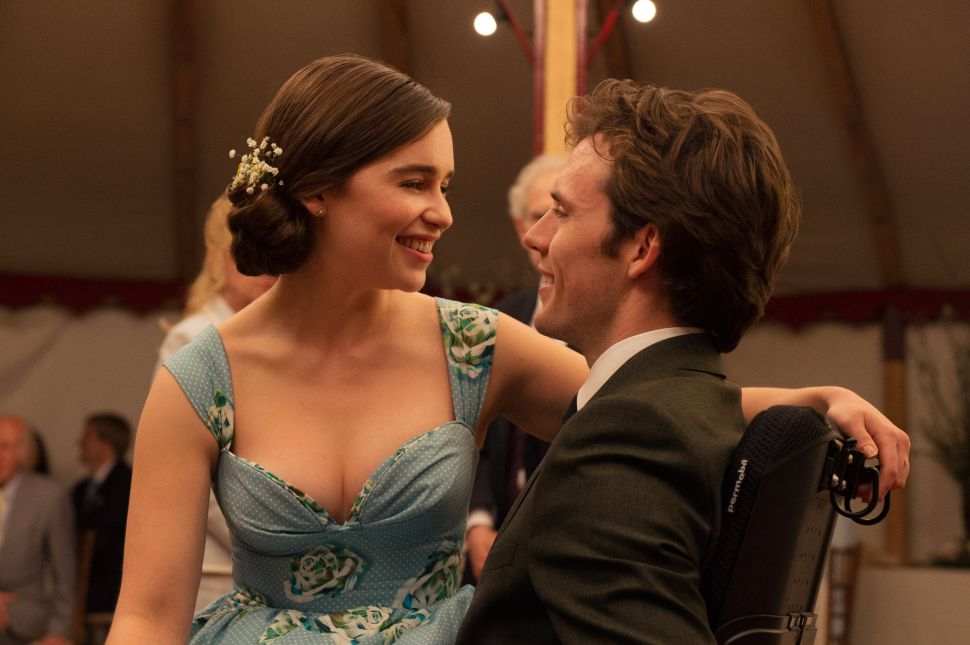