The comments, made outside the brash businessman’s eponymous Manhattan tower, came just days after House Speaker Paul Ryan—arguably the most prominent national Republican lawmaker—formally endorsed Mr. Trump. But Ms. Mark-Viverito was outside the Fifth Avenue Xanadu to protest the candidate’s claim that an American judge’s Mexican ancestry made him unfit to handle the fraud case against the mogul’s real estate seminar, Trump University.

“People should be very mindful of who it is that is running. And this is the nominee, and this will be the nominee, of the Republican Party. And that the Republican Party is rallying, and closing ranks, around this candidate,” the Council speaker, a native of Puerto Rico, told reporters. “They all have to take responsibility for what rhetoric he’s spewing. What values, so-called values, he says he represents. They all have to take responsibility.”

The often belligerent Mr. Trump dispatched 16 rivals, almost all of them more seasoned politicians than himself, in a Republican primary that often turned bitter. Some conservative intellectuals, finding Mr. Trump evasive and inconsistent on key issues, have sought to recruit a more ideological candidate to run as an independent.

But so far such efforts have proved fruitless, leaving Mr. Trump to likely face Ms. Clinton as his main opponent in November. Mr. Ryan was the most influential Republican to initially resist supporting the Queens-born magnate, and the Wisconsin lawmaker’s shifting position appears to be a weathervane for the party establishment.

The House speaker has, however, criticized Mr. Trump’s claim federal Judge Gonzalo Curiel “should have recused himself” from the fraud case. The candidate asserted that Judge Curiel, an Indiana native, could not remain impartial in the proceedings because his Mexican heritage constituted an “inherent conflict of interest” given Mr. Trump’s plan to construct a wall along the U.S.’s southern border.

Ms. Mark-Viverito seemed to dismiss any attempts by Republican leaders to distance themselves from their nominee’s more inflammatory remarks—and called Mr. Trump a “bully” and a “racist.”

“There’s no other way but to say that this is not acceptable, and it does not represent who we are,” she said.

Mr. Trump has also indicated that a Muslim jurist could not properly adjudicate the Trump University case because of the candidate’s proposal to temporarily bar people of the Islamic faith from entering the country.

The GOP candidate’s camp did not immediately respond to requests for comment. 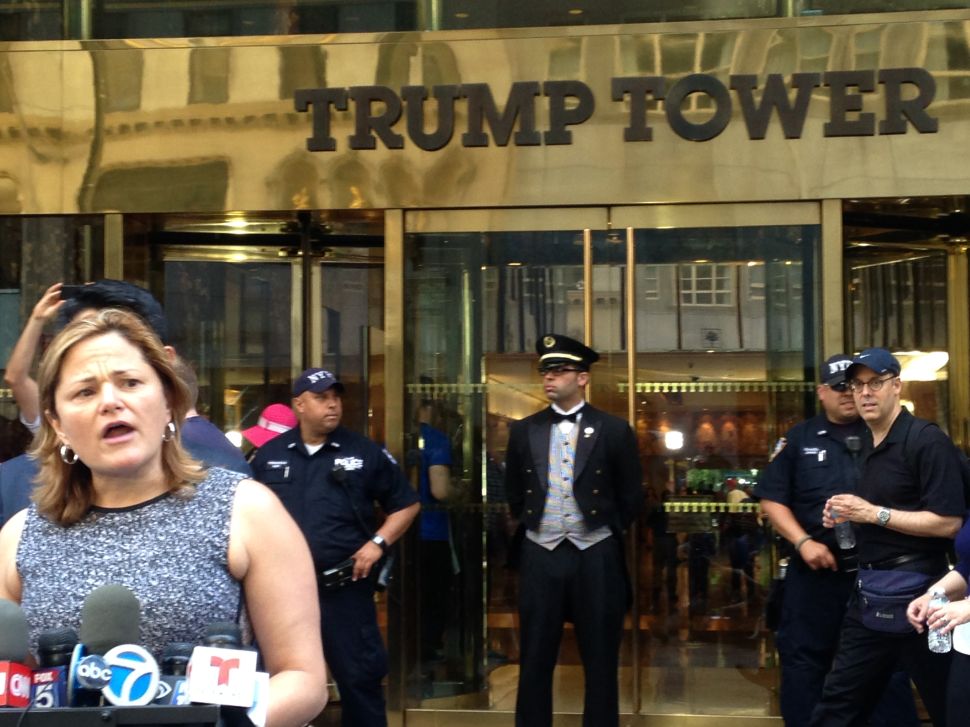